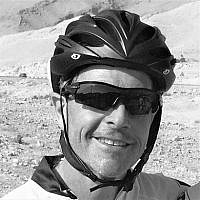 The Blogs
Jonathan Bernstein
Apply for a Blog
Advertisement
Please note that the posts on The Blogs are contributed by third parties. The opinions, facts and any media content in them are presented solely by the authors, and neither The Times of Israel nor its partners assume any responsibility for them. Please contact us in case of abuse. In case of abuse,
Report this post.

Day One: It’s Sunday morning in Israel and we are off on the first day of a six-day, 450-mile ride throughout the country with wounded Israel Defense Forces (IDF) veterans and 40 other riders from the US.

There are at least three reasons this ride is so significant. First, thanks to donations from Friends of the Israel Defense Forces (FIDF) supporters, we are able to provide assistance to the wounded IDF veterans on the ride and others like them. What a meaningful way to thank these people who have sacrificed so much and help improve their lives.

Second, even though I spent many years in Israel, which, more than anything else, has shaped who I am, this is a brand new way for me to see and experience the place. There’s a reason people here refer to Israel as “HaAretz” (the land). Their history and daily existence are wrapped up in the geography. Experiencing Israel from the seat of a bike will further strengthen the connection we — myself and my son Elan who is joining me on this ride — have to the people and the land.

Finally, I am moved to tears that I am doing this with my 23-year-old son. Our four months of training were a great father-son bonding experience, but also made us value more what we are about to experience. Just as my mother bequeathed to me a love for Israel, I wish to do the same with my sons. 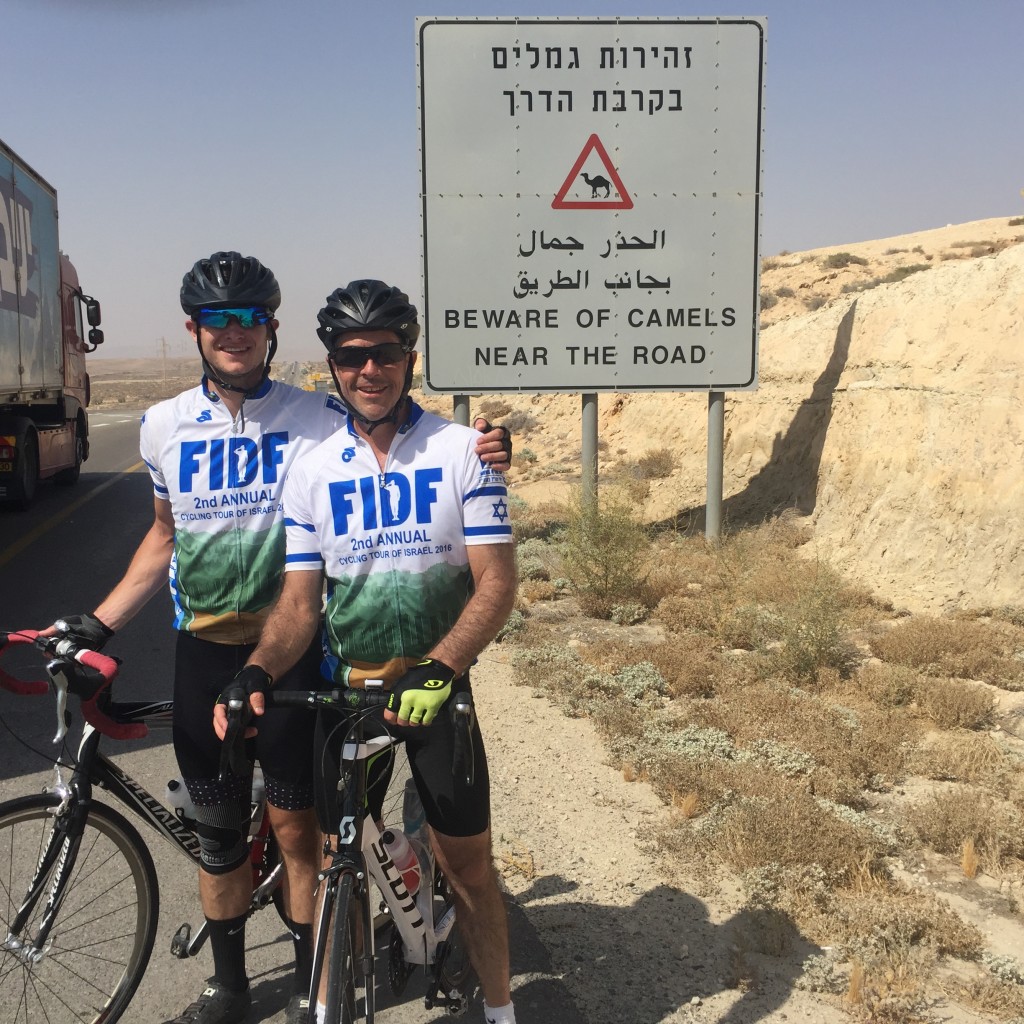 Today’s ride is through the Southern Golan. There will be plenty of steep inclines and descents through some of the most dramatic landscapes in the country and. as I mentioned, we’ll be riding with wounded IDF vets. Heroes like Adi Deutsch.

While serving in the Golani Brigade, Adi stepped on a land mine and lost his right leg, but this didn’t stop him. After Friends of the Israel Defense Forces (FIDF) provided him with special athletic prosthetics and training for competitive sports, Adi competed in Paralympic, triathlon, and Iron Man events. “Suddenly, I was able to participate in sports I never thought about before… It changed my life,” he told me.

It’s both inspiring and daunting to be riding with people like Adi, who seem to dismiss the great sacrifices they made by claiming “we were just doing our duties.” Hearing his story would motivate the most jaded person in the world to work harder and get through obstacles.

We finished the first day of riding with three flat tires and weather of 99 degrees Fahrenheit. We had ridden close to 60 miles. 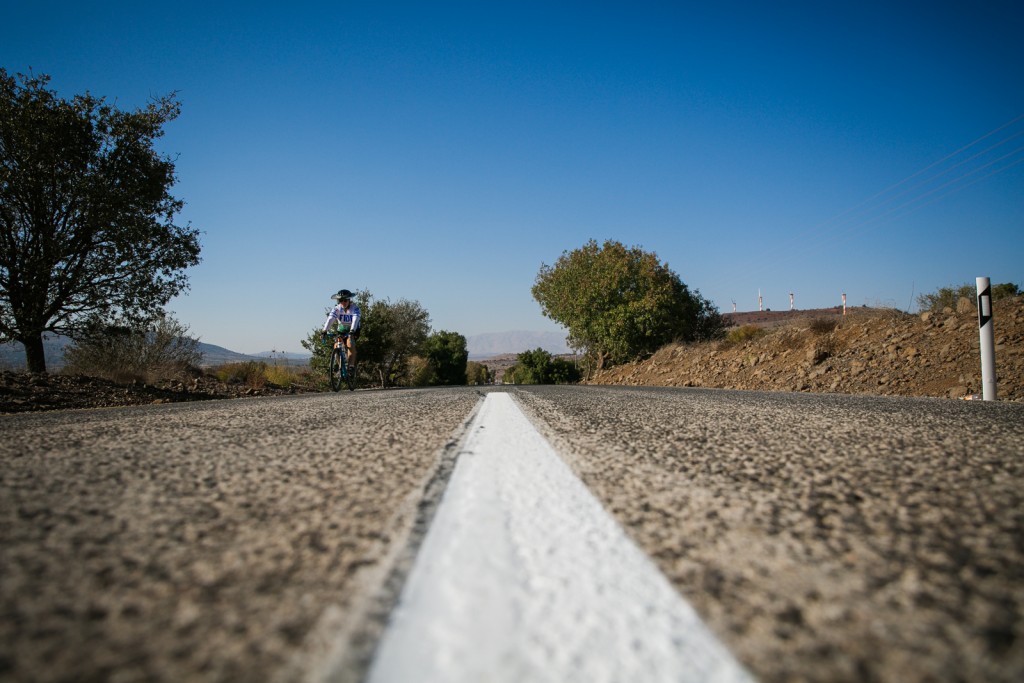 Day Two: To avoid the worst heat of the day, we started our ride at 7:00 a.m. and after a long, steady climb arrived at the peak of Mt. Hermon around 10:30 a.m. At the top is a winter ski slope. While it’s certainly not the greatest place in the world to ski, it would be fun to come back in the winter and get an “I Skied Israel” t-shirt or bumper sticker.

The soldiers stationed on an IDF base at the top of the mountain met with us and explained how the mountain provides Israel with a huge military and strategic advantage. While there, we could hear the loud booms and see clouds of smoke in a Syrian town below, where the fighting continues unabated. I can imagine how difficult it is for the soldiers to monitor this situation with factions constantly changing.

One of the soldiers serving up there, a Lone Soldier with no immediate family in the country, told us he attended the FIDF-funded Lone Soldiers Fun Day on Thursday, September 15. He seemed visibly moved by the outpouring love and support from overseas.

On the descent, we traveled closer to the Syrian border and the sounds of the bombings grew more pronounced and frequent. After stopping for one more delicious lunch at a Druze village, we arrived at the Valley of Tears war monument. As I pulled into the parking lot, I didn’t see Elan or his bike so I asked someone if she had seen him. I was told that a few of the riders near the front didn’t know they were supposed to stop and had continued down the road, “but would probably realize they went the wrong way as they approached the border and the bombing.” Israeli humor. The road actually ended a short distance ahead and Elan and the other riders were back with us within a few minutes.

With everyone gathered at the monument, we heard about the heroic tank battle that occurred there from one of its commanders. While he was in the middle of his talk, an Israeli who happened to be visiting the site approached him from behind, tapped him on the shoulder and without saying anything shook his hand and quietly moved on. It was a quick, simple exchange, but it showed me how much these military heroes are revered in Israel. The battles from long ago can feel so relevant to today. It made me feel good to share this connection with this random Israeli, who I didn’t know or meet through our support of the wounded, some of whom fought in this same ’73 war. 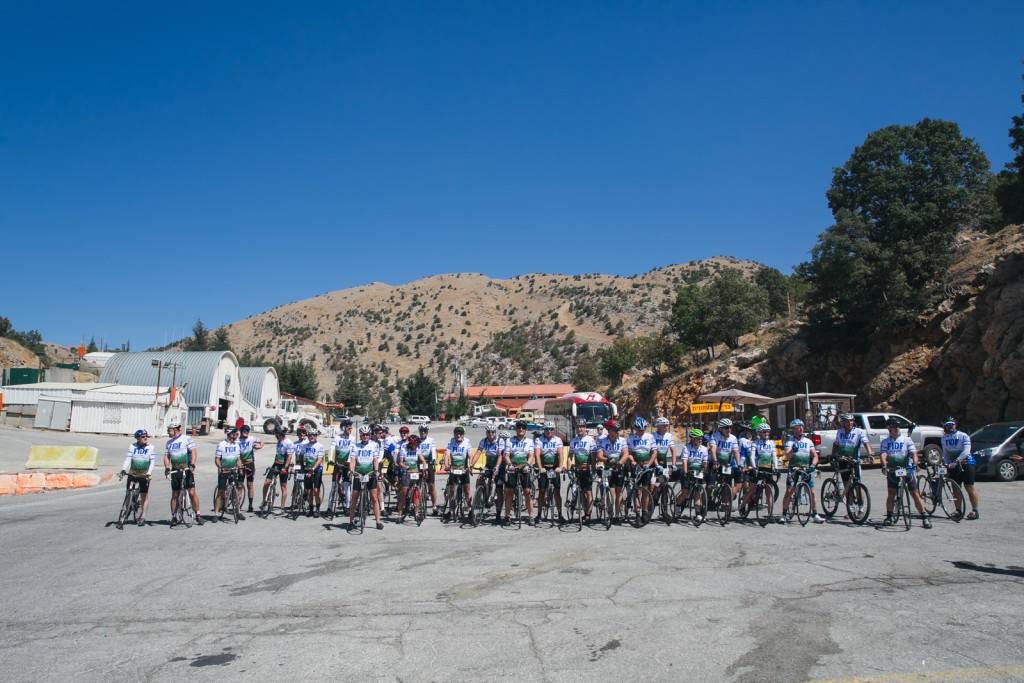 The group of FIDF cyclists at Mt. Hermon. (Nadav Ariel)

On the long downward ride back to the hotel at Lake Kinneret (Sea of Galilee), I thought about the day. It struck me that Israelis up on the Golan — Jews, Christians, Muslims, Druze, and others — have been living with these bombing sounds for years. I imagined a young boy and girl lying in bed at night embraced by the love of their family and serenaded to sleep with these sounds. No one needs to explain to Israelis about the threat of ISIS and other extremists. It’s part of their existence. The Hermon is an outpost. The land and the people there are protecting all of us from this violence. 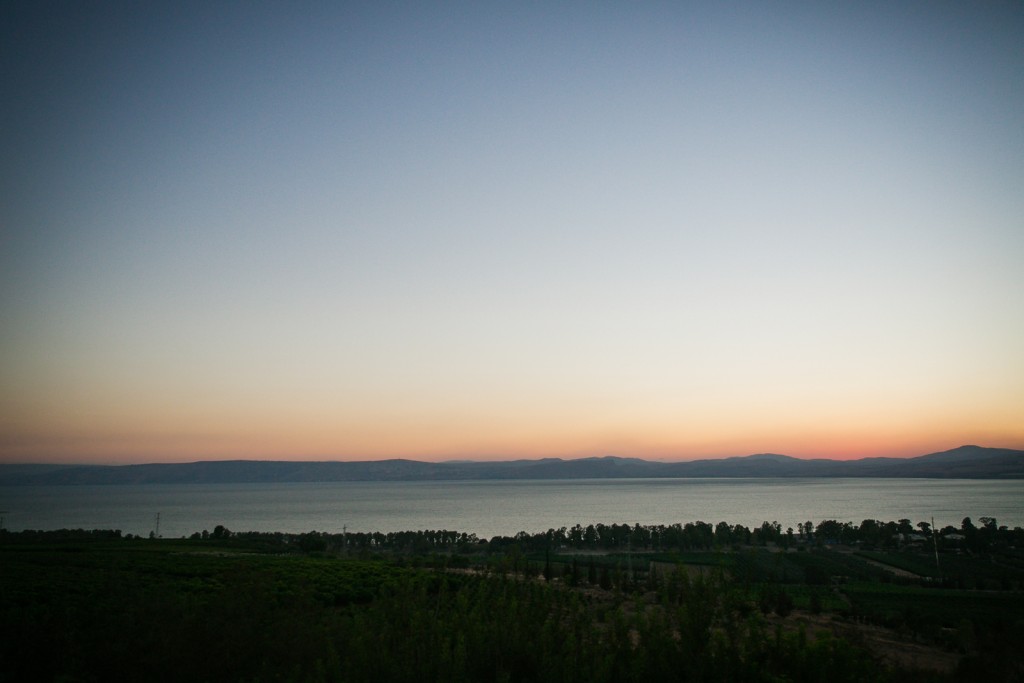 Day Three: This morning, from the lookout on a northern-border army base, soldiers explained to us how the ring of Lebanese towns about a mile away were originally Christian, but are now controlled by Hezbollah operatives. The threats are nearby and real and it’s clear that these kids in uniform have a lot of weight on their shoulders. After thanking them for their service, we rode about 60 miles through the Hula Valley back to Lake Kinneret, stopping at a memorial for 73 soldiers who were tragically killed in a helicopter crash in 1997.

On this day, we rode with two wounded IDF veterans, Ronen and Avichai. Ronen’s amputation was too far up his leg for prosthetics so he rode with one leg. Yes, you read that correctly — one leg. It was incredible to watch how he figured out how to just get on his bike, let alone start pedaling. Meanwhile, Avichai explained to me how he lost his arm in the 1973 war. He was captured on the Suez Canal by the Egyptians and held prisoner for six weeks, enduring beatings and torture until Henry Kissinger, who was the US Secretary of State at that time, brokered a settlement. I asked him how he was able to get through that experience and he said anyone would have done so. I disagreed.

I can’t tell you how rewarding it was to know that we helped turn Ronen and Avichai’s lives around with our support. Avichai told me that the training and equipment he received from FIDF allowed him to participate in sports again and changed him from being a “cripple” to a “normal person.”

Day Four: The ride was more than 100 miles, starting from our hotel on the north coast of Lake Kinneret and ending at the Dead Sea. This was not supposed to be the hardest day, but it clearly was. All was fine until around noon, when temperatures soared over 110 degrees Fahrenheit. 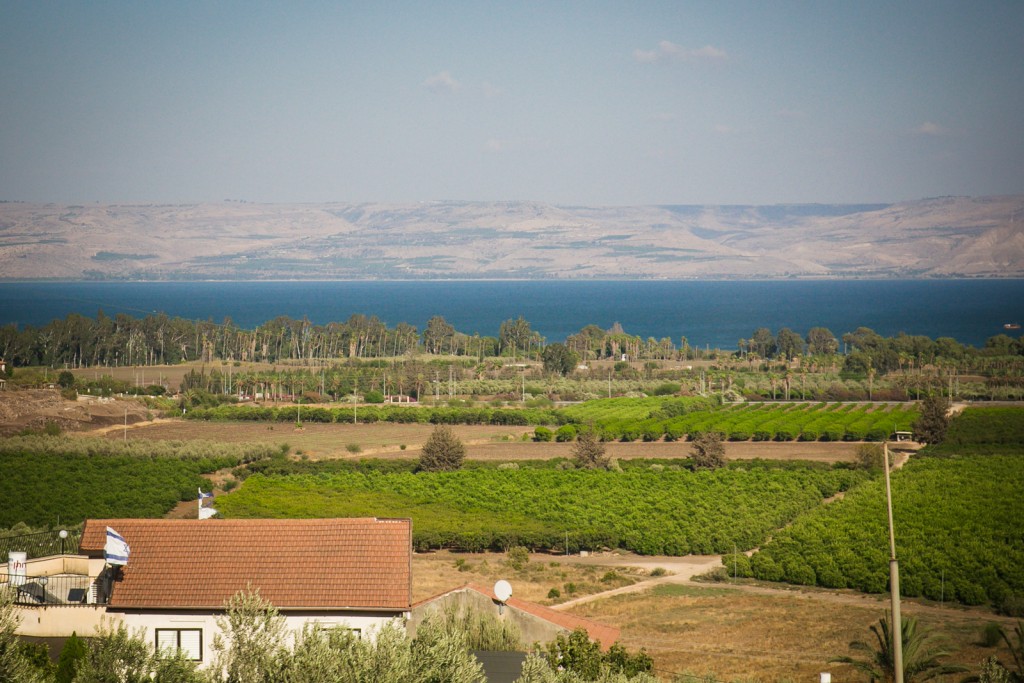 It’s hard to explain what makes you want to keep pedaling and not board the air conditioned bus that you know is right behind you. The heat was taking a serious toll on all of the riders including me and Elan, and I didn’t want to abandon the team. Maybe we were emulating the soldiers who need to rely on each other to survive.

Elan and I estimate we each drank 18-20 bottles of water during the six-hour ride (3-4 gallons). I’ve never put so much liquid into my body. The staff was amazing and managed to keep everyone safe by making us stop for breaks and hydrate every few minutes.

Day Five: We climbed the 12 miles of cliffs along the Dead Sea into the Negev Desert and found our way to the Great Crater (HaMakhtesh HaGadol). Of course, after crossing the crater we had to climb out of it. The accumulated climb for the day was 5,300 feet and the scenery was amazing. After stopping for lunch in Yeruham, we rode to an artillery instruction base where soldiers demonstrated the rifles and other equipment they use.

Day Six: Our cycling ended with a relaxing and delightful trip through Tel Aviv. All of us were wearing our FIDF jerseys and it was fun to watch the reactions from people on the street. Some knew who we were and shouted out their support. Others were curious and I found myself proudly yelling, “Yididei Tzahal” (FIDF in Hebrew) as we whizzed by. 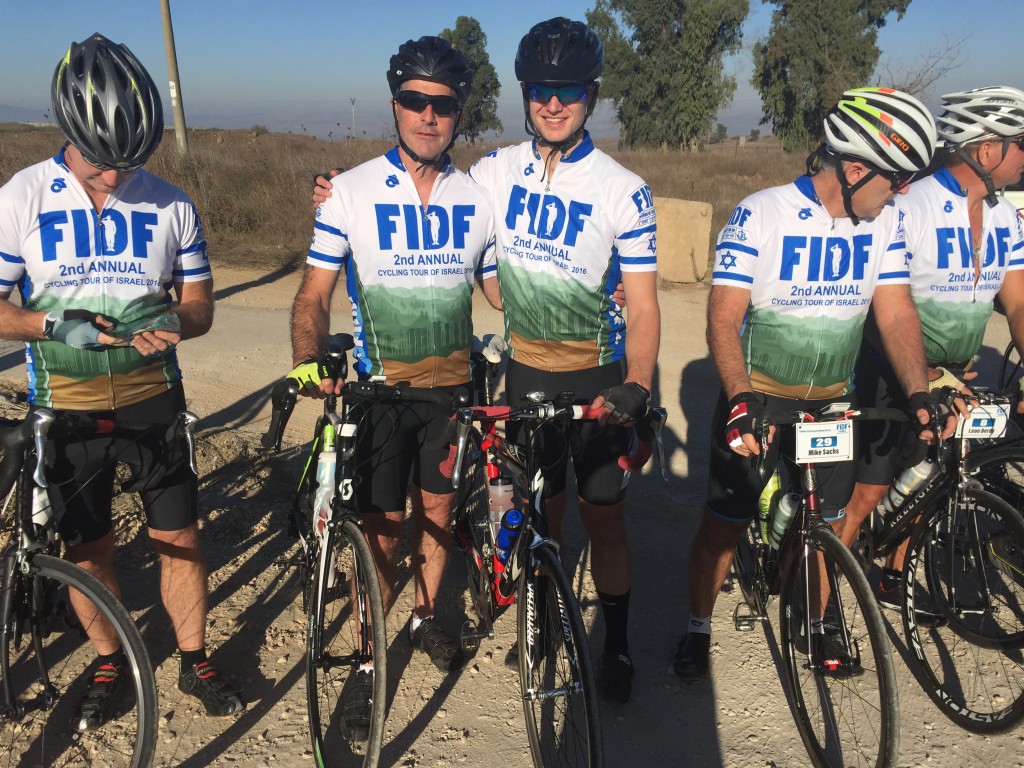 The FIDF Cycling Tour of Israel (Courtesy of Jonathan Bernstein/FIDF)

The program concluded with a medal ceremony. Each rider took a few minutes to share some thoughts about the trip. Many of the others were experienced riders who had been on numerous biking trips. Some had been to Israel many times. For others, it was their first time in Israel. But everyone developed or strengthened their emotional and/or spiritual bond with the land and its people.

Steve Hofkin from Redding, Calif., was last in Israel 30 years ago. He was tearing up as he described how this trip helped him on his personal journey reconnecting him to Judaism and Israel. Bay Area resident and local FIDF Board Member Lev Tripolsky was clearly changed by this trip. It seemed like it forced him to realign his priorities. He explained how he is even more committed to Israel now and challenged us in California to bring a bigger delegation than Texas next year.

In the end, we rode around 400 miles with an accumulated elevation gain of 20,000 feet. It was a personal accomplishment, but what made it so meaningful were the connections with and support for Israel’s wounded soldiers.

Through an online fundraising campaign, my son and I raised a total of $26,836 from 91 donors, including matching contributions, to support FIDF programs for wounded Israeli soldiers and veterans. Please support our campaign here.