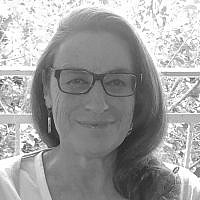 The Blogs
Gabriela Cohen
Apply for a Blog
Advertisement
Please note that the posts on The Blogs are contributed by third parties. The opinions, facts and any media content in them are presented solely by the authors, and neither The Times of Israel nor its partners assume any responsibility for them. Please contact us in case of abuse. In case of abuse,
Report this post.

It is late last Monday afternoon. The heat has eased, the light is softening and we are nearing the end of Yom Kippur. Through my window waft the usual street sounds of this special day: the exclamations of children on their bicycles as they enjoy the last moments of pedaling freely along the car-free streets of central Tel Aviv, the strollers with prams and the people chatting at the junction between our road and Rabin Square. But in between the hum of chatter and the cacophonic exclamations of delight from children, strains of the call and response chanting of the worshippers drift in. They are making their final pleas to be heard, to be forgiven and to be cleansed of their wrong-doing and misdeeds of the last year. Despite my traditional family background, I no longer observe the religious rituals of Judaism, but the devotional singing lures me like a siren’s call, and I fly downstairs and run over to the square.

In the southern flank of Rabin square is a gathering of orthodox Jewish worshippers, a distinctive gathering in white attire. The men, with pe-ot and kippot, and the women, dressed modestly and with head coverings, are roughly separated from each other but equally immersed in prayer. In former years observant Jews, who refrain from eating and drinking from the sunset to sunset hours of Yom Kippur and devote themselves to contemplation and prayer, worship from within synagogue walls. But this year all that has changed. Because of the social-distancing regulations synagogue services that are usually crammed with people, have been ousted out into the open air. This year participants are obliged to share the public space with the rest of the population: the cyclists and the tricyclists, the skaters and skate-boarders, the walkers and the strollers, most in informal dress, many in shorts and sleeveless tops in tune with the heat day.

The darkness is fast descending as Yom Kippur draws to a close, the worshippers implore more urgently and the children continue careering down the empty streets. And just to complete the scene, a perfect two-thirds moon is rising to the side of the towering Washingtonia at the corner of Ibn Gvirol Street. The composition is elegant and serene.
At a time in which every section of the society seems opposed and polarized from each other, where groups and communities define themselves by what they dispute and despise in others, this Ne-hi-la* scene in Rabin Square appears idyllic to me. Similar scenes presumably took place all over the city and in many parts of the country. For a few precious hours distinct Jewish groups were able to share the public space, engage in their respective activities and simultaneously participate in their own Yom Kippur traditions. It was a short interlude in which opinions were not currency, a unique live-and-let-live moment of social harmony, and I felt lucky to be a part of it.