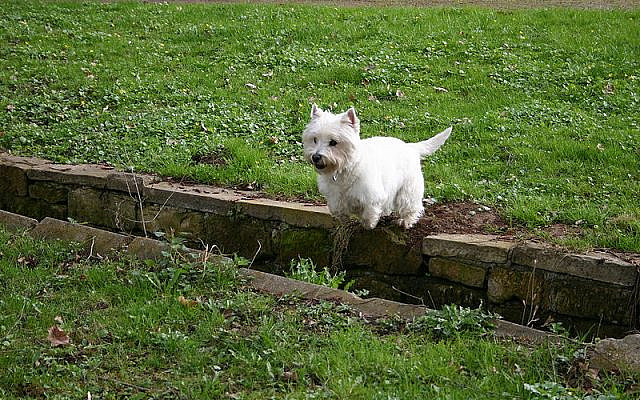 In the year 5782, the fear of Covid again called for Floridians to watch televised Rosh Hashanah services from the comfort of their living rooms.

So my wife, my dog and I watched a Jewish New Year service on YouTube.

The service beamed out of an Aventura Temple for You Tubers to watch throughout the world.

I listened and kinda remembered the prayers.

I watched the rabbi and the canter davening behind protective clear plastic shields.

They stood in front of the ark dressed in their white suits with blue ties and black and gold tallises (fringed shawls).

The Torah had been removed from the ark.

So I stood and then glanced at Daisy, who sat at attention.

She sat on top of the couch intensely staring at the rabbi and the canter.

Yes, her ears perked up as if she understood Hebrew.

Yes, my white West Highland Terrier may be a reincarnated Jew.

Yes, the soul of a deceased orthodox Jew—maybe even a rabbi—rested in her body.

And yes, her eyes reflected the ark, the rabbi and the cantor.

And yes, Daisy studied other dogs on TV but not with this intensity.

I sensed she understood the holy tongue.

I waited to hear if her barks had a Hebraic tone.

But not a sound resonated out of her jowls.

I pictured Daisy’s head covered with a blue yarmulke emblazoned with a yellow Magen David and a short blue and white tallis wrapped around her shoulders.

Would this act of dressing up a dog be going too far a field?

Would dressing my reincarnated dog in temple wear be sacrilegious?

What would Hashem think?

Would Hashem care about what religious clothing humans put on to one of his/her creatures?

Would it matter to Hashem if a Yid was reincarnated into this dog?

What does Hashem think about reincarnation anyway?

What does Hashem think about dogs being allowed into heaven?

At this point my brain yelled, “Enough!”

So I decided to leave the service.

I wanted to wait for the shofar to be blown to observe Daisy’s reaction.

But as I reached the door, I took one last glance at Daisy.

And as if she was made out of white porcelain, she sat with her eyes transfixed on the TV screen.

No muscles flexed, no yawns, no scratching.

Daisy was in the zone.

I wondered what Daisy was praying for?

Yup you guessed it.

She’d pray for a sweet year and to be sealed in the book of life.

So on behalf of Daisy and the whole Laitner family, we wish you, “Shanah Tovah“—Have a sweet, good and healthy (Covid free) year.