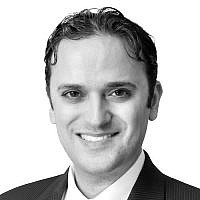 The Blogs
Ben Rabizadeh
Apply for a Blog
Please note that the posts on The Blogs are contributed by third parties. The opinions, facts and any media content in them are presented solely by the authors, and neither The Times of Israel nor its partners assume any responsibility for them. Please contact us in case of abuse. In case of abuse,
Report this post.

COVID-19 has changed reality as we know it. Screens have replaced classrooms. Office meetings are held over Zoom. Wearing a mask is nearly second nature. And life has suddenly became more fragile and precious.

Personal relationships have naturally evolved as well. A growing number of singles tell me they won’t return to previous ways of socializing, nor dating.

For many of them, swiping and ghosting are out. Seeking a meaningful relationship with someone they want to quarantine with is in.

This is supported by a March study conducted at Indiana University’s Kinsey Institute, which explored the effect of quarantine on love and relationships. For singles, the study found, the public health crisis and lockdown have led to higher than usual levels of loneliness and worry, and as a result, more use of dating apps to make a connection. But the way they use the apps has changed; they are more discerning and goal-oriented, less scattered.

Jason Garcia, acting executive director of the Institute, put it this way: “They’re engaging in more messaging and more thoughtful interaction on those apps, so looking at people’s profiles instead of swiping so fast.”

As a dating site dedicated to helping Jewish singles find a serious, committed relationship, it seems that singles are connecting more to some of the unique features we provide, such as the detailed profiles of members and thorough vetting of potential users.

Instead of swiping photos and texting with virtual strangers, JWed is geared to helping members learn about the values of real potential partners. After all, how else can you find your forever partner among so many eligible singles? Going on dates with multiple people who don’t share your values can be fun for some; but ultimately, it leaves you lonely.

I understand the challenge because some 20 years ago – before my beautiful wife came into my life – I used the site myself. This was back in the early aughts when it was called Frumster and mainly served the Orthodox community. At the time, I was working in the pharmaceutical industry for a large healthcare company and enjoying chatting with the quality singles on the site.

Having grown up in Cherry Hill, NJ, attending Temple Beth Shalom, and then becoming active Jewishly as a student at Rutgers University in New Brunswick, I was and am an insider in the Jewish world. As a single who was dating for marriage at the time, I also felt that I could help others like me.

So, I contacted the owner, drew up a proposal, and in 2003 became the new owner and CEO of the site, which we later renamed JWed. Unexpectedly, I was on a new path.

Over the next few years, we expanded. First, we began accepting Jews of all walks of life, from the unaffiliated to ultra-Orthodox. This was trickier than it sounds because I only wanted to offer matches that made sense for our members’ lifestyles. Over time, we perfected a system of questions and combined that with a set of two-way filters that determines access to each profile – so you only see the profiles relevant to your style of Jewish practice. We also added members through key acquisitions, such as our Israeli-sister site, Dosidate.

But even as we grew our database, the world of online dating was in flux. As social media sites burst on the scene, there was speculation that sites like ours would disappear. Then came the swiping apps, led by Tinder, which marketed casual dating.

It was a challenge to figure out how JWed fit into it all. On the one hand, I wanted to offer ease of use, but on the other, I have always been dedicated to the pursuit of loving relationships. Our answer to that was the JWed app. It’s a swiping app but it’s not focused on just a photo. To use the app, users are required to sign up and complete their profiles on our website. We provide detailed information on each card, captured from each user’s profile, so with one quick tap, you learn a lot before you swipe. We plan to offer in-app registration maintaining our full questionnaire and screening process within the next few weeks.

And we are always adding new features, both to our app and online experiences.

For example, early on, when the virus was still centered in Wuhan, my training as a Doctor of Pharmacy helped me realize we were up against a major challenge. I quickly charged our small tech team with the launch of a virtual dating suite, a set of distant-dating tech tools, starting with a video chat option.

In July, we enhanced the app’s video chat capabilities, with the launch of a video date scheduler. The scheduler allows users to prepare for a date, providing the typical excitement and anticipation that comes with in-person dating, while simultaneously protecting their privacy. We are exploring incorporating more virtual dating features, including an option for members to give virtual gifts to someone special.

Thinking creatively about the future of dating is just one way we try to help. Since our members live all over the world, we ask users to include other location information such as where they were born, grew up and want to live, as well as their vacation plans.  This brings more long-distance couples together. That’s another trend we’re following closely.

But I know that new dating trends can be confusing. When do you switch from text to phone? When do you suggest a video chat? Is it worth it to date someone in another country?  For that and more, I suggest our free webinars and IG lives with dating experts.

I also suggest not worrying too much about the right way to date. Sometimes, anxiety can get in the way of a potential relationship. That’s why I’m pleased singles are now increasingly getting past their anxiety and taking steps toward marriage.

In Judaism, there is the concept of “gam zu l’tova;” this too is for the good. I didn’t know what the pandemic would mean for JWed and the future of dating. I am thankful that we’ve found ways to adapt to the situation and continue our meaningful work of bringing two Jewish souls together in marriage, and believe the lessons we learned will continue to serve Jewish singles in finding their soulmates now and beyond the age of COVID-19.