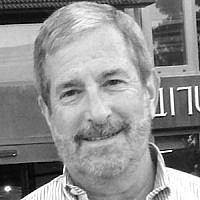 The Blogs
Steve Kane
Apply for a Blog
Advertisement
Please note that the posts on The Blogs are contributed by third parties. The opinions, facts and any media content in them are presented solely by the authors, and neither The Times of Israel nor its partners assume any responsibility for them. Please contact us in case of abuse. In case of abuse,
Report this post.
Perhaps the most fascinating phenomenon in modern Jewish life is the growth of Chabad throughout the world. (If you have not yet read Joseph Telushkin’s book “Rebbe”, I encourage you to do so, as it gives a fascinating if somewhat biased account of the last, and perhaps final Chabad Rebbe, Menachem Mendel Schneerson.) One of the most interesting aspects about Chabad is that most people who are involved in their synagogues and communities do not observe Judaism as they do, nor do they accept some of their most basic beliefs (for example, they believe that the world is only 5765 years old, they do not believe in evolution and do not give women the same ritual rights as men, such as reading Torah or being counted in a minyan).
When I first came to my congregation 22 years ago, there was no Chabad presence in Briarcliff Manor. Their were occasional attempts by a few different rabbis to organize a class or two, but they did not prove to be successful. Then, about 12 years ago Rabbi Dovid Labkowsky moved into the area, hoping to provide a more permanent presence for Chabad. Most of my colleagues, whether Reform, Conservative or Orthodox, do not get along well with their local Chabad rabbi. One major reason is that often when Chabad “sets up shop”, although they claim to be interested in attracting only those who are unaffiliated, the reality is that they will also approach people who are already committed members of a synagogue, sometimes weakening existing institutions.
I decided that having such an attitude towards another synagogue or rabbi was not in anyone’s best interest. Already, some 18 years ago, I had fully supported the creation of the Pleasantville Community Synagogue, knowing that my congregation would lose both present and future members to a new institution. What was more important to me was that our area of Northern Westchester continue to attract Jewish families, and having more synagogues would only strengthen the entire Jewish community. I have, since the establishment of the Chabad of Briarcliff-Ossining felt that they and their rabbi deserved the same kind of welcome. Rabbi Labkowsky will tell you that most of his Chabad colleagues do not receive this same kind of respect and good relations with the rabbis in their communities. We though have upon occasion officiated at funerals together, he has come by my synagogue on Shabbat to wish a mazal tov to members celebrating a Bar/t Mitzvah (including my children), and I have also gone to his family simchas such as his son’s bris. Recently, at my invitation, he came to sit in (and add to) my class on “The Rebbe”. This is how, it seems to me, a Jewish community ought to function.
Since I have been saying kaddish this year for my mother, we have broken new ground in this relationship. As is traditional, I try to say kaddish for her three times a day. Since I don’t travel on Shabbat and my synagogue has no regular Shabbat afternoon service (one is supposed to recite kaddish only with a minyan), I was not sure what to do about reciting kaddish Shabbat afternoons. I then approached Rabbi Labkowsky with and idea. He too had no Shabbat afternoon minyan, so I asked if he was interested in making a minyan together with members of my synagogue and his. I knew that separately neither of us could get the 10 required for a weekly commitment, but perhaps together we could. Of course, there would have to be compromises on our part in following their customs, and on his part by being seen as cooperating with a non-Orthodox synagogue, but if we could supply some people and he could too, perhaps we could make it work. Each week since March we have gathered together to make what I believe is the only combined Conservative-Chabad minyan in existence!
While I will never become a follower or believer in Chabad, I can also assure you that Rabbi Labkowsky will not begin to look at Judaism through the eyes of the Conservative movement. Yet as we approach Tisha B’av, a day in which we are told that the destruction of the Second Temple was caused by sinat chinam (basely hatred of fellow Jews), I hope that together we have shown that as Jews, even when there is much that divides us, there is even more that can unite us.
About the Author
Rabbi Steve Kane is the rabbi of Congregation Sons of Israel in Briarcliff Manor, New York. He has served there since 1993. Since 2001 he has been an Adjunct Instructor at the Academy for Jewish Religion, He is also active in the Ramah camping movement, having spent more than 20 summers at various Ramah camps. He is married, and is the proud father of three children, one of whom currently serves as a fitness instructor in the Golani Brigade of the IDF.
Related Topics
Related Posts
Steve Kane
Comments