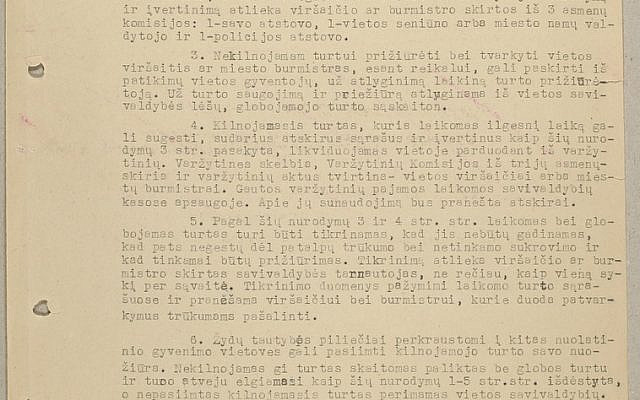 I would like to remember what my grandfather, Jonas Noreika, did eighty years ago during the Shoah in Lithuania throughout this week that is leading up to International Holocaust Remembrance Day on January 27, 2021, by focusing on only seven of the documents he signed in 1941. 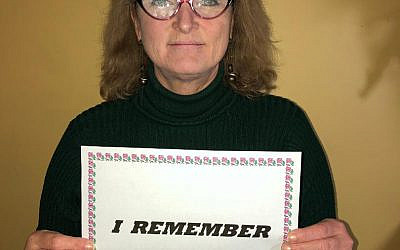 During his tenure as District Chief of the Siauliai Region from August 1941 to March 1943, Jonas Noreika signed at least 68 known documents that profoundly impacted Jews during the Holocaust.  The documents can be found here.

He was involved in many of the administrative details leading up to their murder and determining how their plundered property should be distributed even before they were murdered. It was never intended for Jews to return. Therefore, they would not need their property in the future.

Here is one of the first documents he signed just after he officially took office in August 1941 under the Nazi administration.

This is in reference to instructions concerning the unattended property of Communists who have run away, as well as of Jews.

1) The movable and immovable property of Communist activists and of Jews that is left unattended shall be confiscated under the domain of the local administration until further instructions are given by the government.

2) Once the local administration has taken over the movable and immovable property left unattended, it must create and register a list of the property. Three copies of the list must be made, two sent to the District Chief, while the third can remain with the local administration. The creation and registration of the list will be the responsibility of the local chiefs or secondary city mayors who can create a commission of three people: 1) its own representative; 2) a village elder or real estate manager; 3) a police representative.

3) Regarding the security of immovable property, the local chief or city mayor may designate and pay a local resident to monitor the property. The payment for security and monitoring of the property may come from the local government’s monitoring property account.

4) Regarding the immovable property, which can spoil if left alone over time, can be sold locally at an auction. The auction can be promoted by an Auction Committee of three persons who have been approved by the local chiefs or city mayors. The funds received from the auction shall be held by the local administration. The use of the funds shall be addressed separately.

5) Regarding points 3 and 4, the secured property must be checked and properly monitored so that it won’t become ruined. The local resident chosen by the chief or mayor to monitor the property shall check upon it at least once a week. The details of the property that has been checked shall be given to the chief or mayor, who will then decide on the next course of action.

6) Jews who are transferred to other places to live permanently may take their movable property at their own discretion. The real estate is considered property unattended and shall be treated in accordance to points 1-5. The movable property that is left shall revert to the local administration.

7) Orchards and gardens left unattended may be taken over by the local administration who may govern them themselves or transfer them to other individuals for an agreed-upon fee.

On this first day of the week leading up to the International Holocaust Remembrance Day on January 27, I am astounded by the perfunctory callousness of how the property of Jews was administrated, in triplicate. So much is left unsaid in this document, and I tremble at what message of horror lies in between the lines, which was all borne out within months. Eighty years later, I remember one Lithuanian’s role in the Holocaust.

The Lithuanian government considers his actions heroic. The shame is therefore current, as current as it was when this document was written 80 years ago. Holocaust revisionism as a national policy makes the crime contemporary.

The Nazi’s Granddaughter: How I Discovered My Grandfather was a War Criminal will be available March 9, 2021; the book is available for pre-orders on Amazon