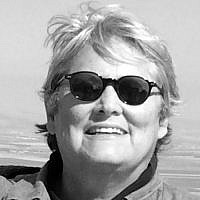 The Blogs
Carla Brewington
Apply for a Blog
Advertisement
Please note that the posts on The Blogs are contributed by third parties. The opinions, facts and any media content in them are presented solely by the authors, and neither The Times of Israel nor its partners assume any responsibility for them. Please contact us in case of abuse. In case of abuse,
Report this post.

Just as Hitler bells, with swastikas, are still ringing in the churches of Germany, still waiting to be taken down and smashed, so the Judensau (Jew-pig in German) can still be seen on churches and cathedrals, both inside and outside the buildings. These obscene images are found on benches, carved on seats and observed on Christian pews. These reliefs, sculptures  or gargoyles show explicit images of Jews sucking on pigs, sexual acts, and other grotesque depictions.

Historical facts show us that although various images of Judensau were first displayed during the 13th century, Jew hatred had been ablaze for centuries. Sadly, out of the early church much anger arose against the Jewish people, as being God’s chosen ones. 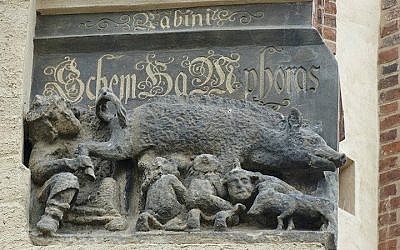 The dark side of Martin Luther is all too obvious. His hatred of the Jewish people and hatred of Judaism in general, helped to embed replacement theology/super-sessionism in leading universities and seminary’s throughout Germany and other European countries. Martin Luther taught at the Leucora University in Wittenberg, Germany. And on the church that he pastored was a relief of Judensau.

Judensau images were used by much of the church to make jokes of the Jews for centuries. Vom Schem Hamphoras und vom Geschlecht Christi (Of the Unknowable Name and the Generations of Christ) was perhaps the last book written by Martin Luther before he died. In the book, he laughs at the name of God (Hashem) engraved on the statue of the Wittenberg church. Luther considered Jews to be the “devil’s people.”

In 1933, after Hitler took power as Chancellor of Germany, he became “friendly” with the Christian church. He applauded the Christians and counted himself as one of them. Soon the Nazis would walk into the churches and hang the flag of Hitler’s Germany next to the Cross. Not long after that, the Cross came down and the swastikas remained. The reality of Nazism was unmasked.

Adolph Hitler hailed Martin Luther as a great warrior in Mein Kampf, applauding him along with Fredrick the Great and Richard Wagner. Luther in his book, On the Jews and Their Lies, written in 1543, said, “We are at fault in not slaying them”, which in essence calls for the wholesale murder of all Jews. The Nazi’s used Martin Luther’s words to drive anti-Semitism throughout Germany and across Europe. His words did not cause the Holocaust, but they helped pave the way.

To remove these despicable displays from the churches, buildings and any other places these vile images can be found must be done now. Yes, the Judensau has been in prominent places for centuries and mostly since the Protestant Reformation. But it is our duty to take them down. Germany, are you listening?

Anti-semitism is escalating around the world. Jews killed, mocked, beaten and stabbed. To continue to ring Hitler’s bells of invitation and look at the Judensau carved on your places of worship is abhorrent. It is repulsive. It is evil.

Today, around 50 of these disgusting gargoyle type reliefs still exist. What should be done? The answer is to remove and destroy them. It is the only appropriate action. A chisel, a crowbar and a sledgehammer are all that is required. That and a determination to strike a dagger into the rise of anti-Semitism in your country. 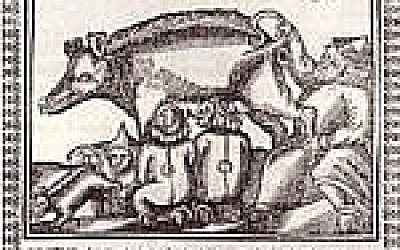 Repentance comes in different forms, but it always means turning around and going in the opposite direction. It involves words and actions. Always actions! For the Christian church, repentance means that we must act in a way that causes restoration of relationship. In this case, it could be the beginning of reconciliation and a measure of trust between Jews and Christians.

From a recent article in the Algemeiner, May 28, 2019 “Merkel spoke of dark forces on the rise in Europe, saying, “In Germany, obviously, they always have to be seen in a certain context, in the context of our past, which means we have to be that much more vigilant than others. We have to tell our young people what history has brought over us and others,” she said.”

Yes, there are dark forces that are spilling over European countries, America, Canada and so many others. I wonder if there is any country left untouched. We are finding ourselves in a tsunami of anti-Semitisim. Not only should that make us angry but our response must be one of courage.

The only way to dispel the surging darkness is to turn on the light so that all can see. Chancellor Merkel, I ask that you turn on the light and expose part of the Jew-hatred in Germany by taking down the Judensau wherever you find them. To not do so smacks of tolerance, silence and complicity. If you need help to take down the Hitler bells and the Judensau, I am available. I will bring my sledgehammer. We can meet in Wittenberg and begin the process!

About the Author
Carla Brewington earned her doctorate at Fuller Theological Seminary in Pasadena, California. She is a Christian volunteer speaker with the Israel Education Force (IEF) an outreach of the Israel education organization, StandWithUs. She can be reached at burntwords@gmail.com
Related Topics
Related Posts
Comments