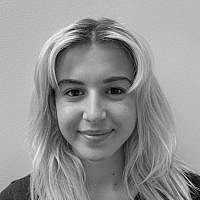 The Blogs
Sophie Balmagiya
Apply for a Blog
Advertisement
Please note that the posts on The Blogs are contributed by third parties. The opinions, facts and any media content in them are presented solely by the authors, and neither The Times of Israel nor its partners assume any responsibility for them. Please contact us in case of abuse. In case of abuse,
Report this post.

Growing up as a Jewish girl in New York who has been to church with friends more times than she’s ever been to synagogue, I’ve always understood myself to be definitively Jewish. I have to be Jewish; if I wasn’t, then I would assume my family would have chosen to remain in the USSR and various other parts of Eastern Europe rather than flee to the US. My relationship with Judaism is strictly secular, consisting mostly of my love for bagels and affinity toward arguing with my mother.

Other Jewish teenagers coming from more right-wing backgrounds than my own were instilled with a love and passion for Israel since they were children. I grew up without this, eventually developing my own sense of Zionism that is not unconditional.

Last week, Amnesty International released the shot heard ‘round the world. Their report accuses Israel of being an apartheid state. Israel’s Bennett-Lapid government, in a hysterical effort to get ahead of the accusations, issued a statement before the report was officially released, denying the claims and calling Amnesty International an anti-Semitic organization. This, of course, launched a “he-said-she-said” media frenzy that likely gave the report more publicity than it would have otherwise generated

I can’t say exactly why the Israeli government decided to commit a PR blunder of this magnitude, but it seems as if they are over-eager to perform the knee-jerk routine they have been accustomed to for years. Despite the government’s best efforts and strange defensive strategies, we have now entered the realm of apartheid accusations made by one of the biggest human-rights organizations worldwide, something that cannot be taken lightly.

This is not the first apartheid accusation aimed at Israel, and it certainly won’t be the last. The validity of these accusations is irrelevant; they will all have the same malignant effect. If accusations continue and no changes are made, apartheid may actually become Israel’s legacy.  If this happens, people like me will begin to turn their backs on the new version of Zionism.

I am here to question how my generation of progressive Americans is expected to feel a connection to Zionism when apartheid accusations are flying like bullets all around us. Israel’s version of Zionism has completely remastered itself in the last 30 years, but I’m only 19.

The Israel I have grown up knowing is the one designed and dominated by former Prime Minister Benjamin Netanyahu, Likud, and the rest of the Israeli right wing. By winning election after election, the Israeli right has effectively won control of the narrative, both for Israelis and members of the diaspora. The Israel of my understanding was educated by the bits and pieces of hawkish talking points that slipped through the cracks of my media consumption, as well as the ever-loudening drumbeat of apartheid accusations. None of this enticed me. None of this resonated with me. Why would it have?

Israel of today looks nothing like the Israel that was described, upon its inception, within the original proclamation of independence. Israel was originally meant to be a safe haven for Jews that strived for peace with its neighbors. Why should the concept of Zionism based upon the Israel of the past apply toward the new increasingly undemocratic and repressive Israel of the present?

It feels as if I’m in a standoff with a state that once upon a time promised to represent me. To the founders of Israel, who looked to form a Jewish state that stands with its arms open to all Jews, I’m sure this would sound antithetical. Yet, I’m sure many things would prove to be unrecognizable to them if they were to see Israel today, especially amid the recent apartheid allegations.

Why should I be expected to blindly align myself with an alleged democracy that is unable to respect the rights of all people in the name of Zionism. The Israeli government is distorting the concept of Zionism to the point where it is unidentifiable to me. As long as the right remains in power and maintains control over the narrative going forward, people like me will have an increasingly difficult time resonating with modern-day Zionism, something that should be prevented while it is still possible.

I want to see myself represented within the only country in the world that I can ethnically align myself with; however, I shouldn’t be expected to sacrifice ethics for ethnicity. As someone who, according to all demographic information, should be a strong-willed and passionate Zionist, I find myself with a weak and conditional sense of Zionism and a yearning for a nation of the past that I was never even alive to see.

This is why it is more important now than ever that we look to create a progressive and inclusive future for Israel that does not isolate itself from those who should be able to support it. The current government has put forth a clear commitment to the narrative they are pushing, continuing to support settlements and occupation despite claims of apartheid.

It is my firm belief that if we want to see the continuation of a Jewish and democratic state, the Israeli government must switch gears and switch them quickly. If the true aim of Zionism is to create a Jewish state like all other states, we must play by the rules of the international community. The best form of Zionism is one that is not unconditional and is not blinded by the belief that Israel can do no wrong.

As Jews that the Jewish state pretends to represent, we have responsibility to speak up for the values of our state. Not only for the sake of Israel but also also to stop the suffering of the Palestinian people. It is time that we use this power and responsibility to stop the madness and for the love of true Zionism, put an end to the settlements and the occupation.