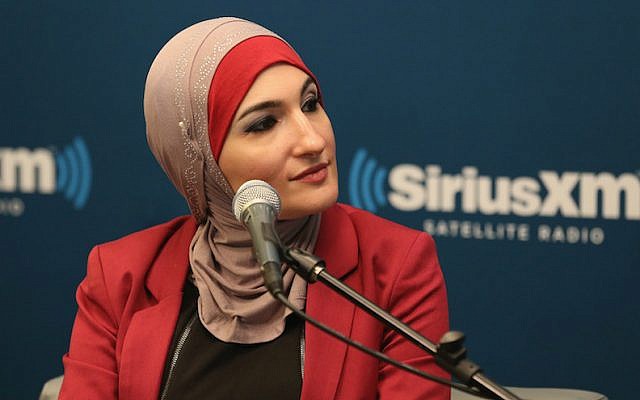 Linda, when you mentioned your “Palestinian grandmother who lives in occupied territory” during your speech at the Women’s March in Washington, D.C., I was upset. It felt to me that you were using that incredible historical moment and the spotlight that it shined on you as an opportunity to bash Israel. After Black Lives Matter inserted its own delegitimization of Israel in their publicized platform a few months earlier, your speech left me seriously wondering if there could be a single political movement for a positive cause that I and so many other Jews and lovers of Israel support that doesn’t take advantage of its time on the world stage to launch attacks at Israel.

But people told me I shouldn’t react that way, that your statement wasn’t anti-Israel and didn’t make you anti-Israel. That you were just sharing your personal identity and family story and that I shouldn’t let that taint my view of you or the modern women’s movement you are helping to lead.

And then there was the desecration of the Jewish cemetery in St. Louis on in response to which you raised $100,000. And I was humbled. And impressed. Maybe I was wrong, I thought to myself. Maybe you really don’t have that hate in your heart I thought you did.

But you yourself have proven me wrong. You do have that hate in your heart. And it burns for Zion. And Zionism. And anyone who considers herself a Zionist, a lover and a supporter of the one country in our world created to take on the role of safeguarding the Jewish people (because no other country would). Because in your view, if you are a Zionist then you are not and cannot be a true feminist.

That’s funny, because I know plenty of strong women who stand up and demand and receive the equal voice, rights and opportunities that they deserve as women, as human beings, and as part of God’s great creation.

And you know what, Linda, these women are Jewish and they are Zionists. And their Zionism and their feminism go hand in hand.

Because Zionism is a movement based on the radical and revolutionary idea that Jews too deserve a safe home in this world as well, like all the great and varied peoples of our world. Zionism is based on the belief that no one should be stripped of their human rights and human dignity that they are born into this world with. Zionism is a movement that strives to advance our world forward, leaving behind the skewed political ideologies and archaic perversions of true religion that have tormented our world for centuries through hate-filled discrimination, brutality and violence, of which the Jews have too often been the victim of.

If what I am saying doesn’t impact you (and I imagine it doesn’t), let me share some straight up facts with you, Linda.

Israel, the country built by Zionism, is the only country in the entire Middle East that is democratic and a protector of women’s rights. While the countries surrounding Israel openly and unabashedly suppress women, severely limiting their ability to take part equally in society, women in Israel of all religions, ethnicities and nationalities, have open and equal access to education, employment and political participation.

Here’s another fun fact you probably didn’t know. Decades before the women’s liberation movement took off in America, female members of the Zionist movement (yes, Zionist feminists) demanded equal access to jobs and opportunities that were traditionally inaccessible to women. And after not giving up on their demands, their demands were met. They farmed in the fields and took up arms alongside the men in the building and protection of newly formed Jewish communities. The idea of a woman carrying a gun was so unfamiliar and unacceptable in the Middle East back then that the 1920 battle at Tel Hai between Jews and Arabs was partially sparked because an Arab sheik demanded from a young Jewish Zionist woman to give up her gun. And she refused.

Sounds like a pretty strong feminist to me. Wouldn’t you agree, Linda?

Let me end by sharing with you a little about myself. I grew up in America with models of strong women everywhere I looked: my grandmother who left Poland in time to avoid the rest of her family’s fate in the Holocaust and started a new life and a family literally from nothing; my mother who, as a child, was told she could choose between being a teacher or a nurse, and never stopped believing that access to opportunity shouldn’t be defined by one’s gender; my twin sister, who gave me invaluable insight into the experience of living as a woman in a world that can still be biased and sexist; and finally my wife, a home-birthing, headscarf-wearing Jewish feminist warrior who serves as a strong model to our two daughters of what women are and could be. In fact, Linda, if you weren’t so anti-Zionist, I think you would really like her.

As for me, my own involvement in political activism and social action preceded my passion for Zionism by a good decade. I spent years fighting for the rights of others, standing up for those whose voices weren’t being heard and whose suffering wasn’t being noticed. And it was exactly those values of freedom and liberty, of respect for all life and the strong desire and commitment to work not only for our own people’s improvement and benefit, but towards the betterment of the entire world that attracted me so strongly to Zionism and to eventually moving my life to Israel.

Yes, Linda, there are there still problems in Israel yet to be solved. There is still work to do. But the same can be said for every country in the world, especially those countries that share a border with Israel, including, of course, Syria.

Your singling out of Israel and of those who support her is the exact opposite of feminism. It, along with many other great movements of our time, is about expanding the circle of inclusivity, not making it smaller. You yourself said in your now famous Women’s March speech, “When we fight for justice, we fight for it for all people”. Apparently, you meant for all people except for Jews who believe that they also deserve a state that protects them. Your statement that a woman cannot truly be a feminist if she is a Zionist excludes people and makes them feel unwelcome and unwanted in your version of feminism. It also shows your true colors and your true hate, your true discrimination and your true exclusiveness. I hope the world opens up their eyes and sees this and stops shining its spotlight on you as a feminist to follow and to emulate.