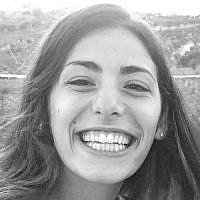 The Blogs
Tamar Jonas
Apply for a Blog
Advertisement
Please note that the posts on The Blogs are contributed by third parties. The opinions, facts and any media content in them are presented solely by the authors, and neither The Times of Israel nor its partners assume any responsibility for them. Please contact us in case of abuse. In case of abuse,
Report this post.

Please don’t misunderstand me. I love Israel. I am apprehensive to share my story because I fear that people might misunderstand me. I am not here to complain but rather to raise awareness and, who knows, maybe even change a senseless policy. A policy that should never have existed and would be swiftly removed if only people knew about it. I’ll explain.

I have given a lot of myself to this amazing country. My parents live in America, yet I have chosen to move to Israel and have given the last two years of my life serving my homeland and the people living in it. I have given of myself completely – physically, emotionally and spiritually. I have sacrificed a lot but I have done it with a full heart and not a tinge of regret because I love this country and its people. You are probably thinking to yourself, this will be a wonderful tear-jerker about a lone soldier. Sorry to disappoint.

My name is Tamar Jonas and I made aliyah from Riverdale, NY three years ago. I spent the last two years not in the army but rather as a national service (from here on referred to as sherut leumi) girl. Many Orthodox (I don’t love the term either but please excuse me for the purposes of my point) girls in Israel instead of serving in the army choose to serve in sherut leumi, meaning they choose to intensely volunteer in communities around the country.

During my first year of national service, I largely worked with the Russian-Israeli community. I, along with my two co-bnot sherut, taught many classes about Jewish holidays and values to 7th and 9th graders in a secular school in Tel Aviv, ran programming, tutored and tried to be an address for emotional support. Easy it was not. Demanding? Very. I was the only American in my apartment and in the entire school of close to 800 people, but I felt that my job was of utmost importance because it is the birthright of every Israeli child to know about our rich religion.

During my second year I worked in a dormitory high school with at-risk teenagers from France and Ethiopia. I don’t mean to sound pretentious when I say I don’t doubt that I had an impact on the students there. My students and chanichim might know this, but not everyone in the government seems to know what these 16 year olds know…

In my first year of national service I had not yet made aliyah. That means that although I was living in Israel, I had not yet become an Israeli citizen. I was only 19 so it seemed fair enough that I wasn’t ready yet to make the huge commitment to live here for the rest of my life. That’s where I was wrong…

A few weeks before starting my national service, while I was working in a summer camp in America, I received an email that due to a new law passed by the Knesset I would not be allowed to do my sherut leumi in the place which I had chosen. Don’t worry, the email went on to say, everything will be worked out and you will start your national service as expected. I didn’t worry. Another email came a few days later: We are still working on it, stay calm. Then came a third email: You need to find a new job and there are only a few places that will accept you because of the new law. It doesn’t matter that you traveled around the whole country looking for a place that would be a good fit and had to go through a long process to be accepted there. Now I was nervous… What was this law? And why was it being passed so close to beginning of the year?!

The law seems simple: only someone with an exemption from the army (ex. religious exemption for orthodox girls) can serve in sherut leumi. Being that I, like hundreds of other girls, had not made aliyah, we were not obligated to serve in the army and therefore could not receive exemptions. Add in a line, I thought,  that people who do not have Israeli citizenship can serve without said exemption. Simple enough, right? I thought so too…

I wasn’t willing to give in. I had to fight to serve. I had to cry and beg. I had to argue and be stubborn. Growing up I dreamt about all the ways I could serve Israel and help it grow. Now that I had the opportunity, the country was pushing me away. For reasons beyond my knowledge, the country has an interest in not allowing people to do sherut leumi if they are not citizens, an issue that doesn’t exist for lone soldiers.

I succeeded in convincing the sherut leumi organization to allow me to volunteer in the place I had chosen. I told them I was coming to my job and they couldn’t forcibly remove me. It wasn’t simple but they also allowed me to move into the apartment that they had promised and after a few weeks of pushing they also gave in and agreed to pay for my health insurance. The organization is not evil but they were forced to bow to the law which wouldn’t let me serve. They never agreed to pay me the monthly 800 shekel (less than 300 dollars) that is meant to cover the basic costs of living and I never received a RavKav (Israeli metrocard) that would allow me to travel to and from my volunteering for free. I am blessed that I come from a family that was able to support me that year but I know many girls had to change their places of volunteering (a loophole was found to allow volunteering in a very few other places) and I have even heard stories of girls who decided that they no longer wanted to do sherut leumi and stayed in their origin countries. For a country that praises volunteerism, it is a disgrace to keep a law that limits a whole group from serving in sherut leumi. More than that, I have numerous stories of girls who were going to stay in Israel after their gap-year and serve but because of the law chose not to.

I love Israel. I think every Jew should be allowed to move here and I firmly believe that the country should welcome them with open arms. I felt that the government not only didn’t open its arms to me but actually pushed me away. If this were only my story, I wouldn’t feel a need to share it so publicly, but this was 2 years ago and the law still hasn’t changed. Each year girls choose to stay in their original countries instead of serving in sherut leumi because of the ridiculous law.

Every person deserves the opportunity to serve this country. It is an incredible experience and I couldn’t be more grateful that I had that opportunity. Shouldn’t other people be as blessed as I with such an opportunity? Members of Knesset, I ask you to please stop actively ignoring this problem. You are in government to make our society better. All I am asking is that you help those who want to do the same by adding one simple sentence to the law. The time has come.

About the Author
Tamar Jonas was born and raised in New York and made aliya 3 years ago. She just completed two years of sherut leumi and is currently studying at Bar Ilan University.
Related Topics
Related Posts
Comments