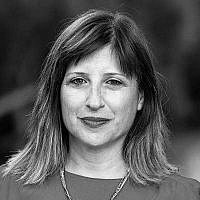 The Blogs
Idit Harel Shemesh
Apply for a Blog
Advertisement
Please note that the posts on The Blogs are contributed by third parties. The opinions, facts and any media content in them are presented solely by the authors, and neither The Times of Israel nor its partners assume any responsibility for them. Please contact us in case of abuse. In case of abuse,
Report this post.

When feminist leaders support the institutionalization of prostitution

She is one of the most popular women in the world. At just 37 years old, she was elected Prime Minister of New Zealand. The eyes of women and girls all over the world stare in awe at this young and talented woman, who in addition to managing and leading a country, does it while juggling a pregnancy and childbirth. In the outbreak of the Corona pandemic, Prime Minister Ardern was the only one who managed to keep her country corona free while all countries all over the world, were counting their dead.

Jacinda Ardern defines herself as a progressive and feminist social democrat. She leads welfare reforms, supports abortions, works to assimilate Māori in New Zealand society however, on the issue of exploiting women in prostitution, Jacinda Ardern does not intend to change the law in her country.

In 2003, a law (Act Reform Prostitution) was passed in New Zealand, allowing prostitution. Decriminalization – creating a legal framework for prostitution, protecting the “rights” of women and men in prostitution, (Since when is being exploited a right?) And preventing the integration of minors into the sex industry. (An impossible task in an institutionalizing prostitution policy).

The law requires consideration for residents living near prostitution areas (so sorry we bothered you!) and prohibits pimping and immigration to New Zealand for the purpose of selling “commercial sex services” (word laundering for prostitution). By law, every person has the right to refuse to provide commercial sex services (thank you so much!), and running a brothel requires issuing a business certificate (when women are products, brothels become a business).

Ardern and Merkel are not alone, also the women leaders of Estonia, Kosovo, Greece, Bangladesh, Denmark, Singapore and Slovakia, permit prostitution to be institutionalized in their countries.

The dissonance between a revered leader and her disregard for the crime of consuming prostitution led me to write a letter to Prime Minister Ardern:

“I think it was the values of the holiness of human dignity, that drew me towards being an activist, fighting the legitimacy of buying human beings for sexual satisfaction.

The experience of many N.G.Os in Israel, and all over the world, together with the research that has been done, shows us, that prostitution is an unfathomable and devastating existence of chronic violence and a critical violation of human rights and human dignity. As a woman, as a human being, I don’t understand, how can you tolerate this ongoing crime against women and men in your country?!

Being in prostitution, in fancy “clean” and “protective” brothels and having checkups for diseases (the “clients” don’t have to prove they are not carrying Sexually transmitted diseases, it’s the women who must be healthy for the men…) do not protect the women from the harms of prostitution that they experience every minute of the day. No human being can bear the ongoing abuse and torture, without getting hurt – mentally and in many cases physically.

Prime Minister Jacinda Ardern, girls and women, including me, admire your achievements, your personality and your skills. Your policy and your leadership during the Corona crisis are a modal for many countries. Please rethink New Zealand’s legalized policy, which has such a huge effect on the whole world.

I received the following reply from Ardern’s office; It was written by Caroline Greaney, General manager, civil & constitutional policy in the Ministry of Justic

“Thank you for your letter to Prime Minister, Jacinda Ardern regarding the legislation of prostitution in New Zealand. Your letter has been referred to me for response as the issues you have raised are more closely connected to the functions of the ministry of justice.

I acknowledge your concerns about the safety of sex workers in New Zealand. However, I note that in 2008, the Prostitution Law Review Committee (the Committee) found that sex workers have chosen their occupation and are quite happy in their job. The Committee consisted of eleven members appointed by the Minister of Justice. It was charged with assessing the number of sex workers in New Zealand at the time of decriminalization and reviewing the operation of the Prostitution Reform Act 2003, three to five years after its enactment. The Committee also considered that in the case of New Zealand, there is no link between the sex industry and human trafficking.

The Act legalised and created the regulatory framework for prostitution in New Zealand. This framework was intended to safeguard the rights of sex workers, protect them from exploitation and create an environment conducive to public health. Legislation of prostitution was a key of these goals, as it enabled sex workers to access the same health and safety regulations as other workers. Under this model, sex work is subject to the same health and safety regulations as other industries and allows both sex workers and their clients to safely seek help for their healthcare.

In 2004, the Committee first met to begin a review of the operation of the Act. This review involved multiple research projects as well as in-depth interviews with sex workers about their experiences in the industry. In 2008, the Committee released its report on the operation of the act and found that overall, the act were achieving its goals, which includes safeguarding the human rights of sex working and protecting them from exploitation”.

The use of expressions such as: “sex workers”, “clients”, “chose their occupation”, “happy in their job”, from the New Zealand Minister of Justice Official representative, expresses the perception of New Zealand leaders, which evidently they see prostitution as a “profession” like any other profession. New Zealand lawmakers support the regulation of the sale of female and male genitals to anyone who wishes to buy them, and Prime Minister Arden does not see this as a problem.

Dr. Helen Johnson from the human rights organization – “SASE – Standing against sexual exploitation” from the UK, and Tony Pitt, had published a report to find out if the decriminalization model, 15 years after its enactment, works. Their conclusion was unequivocal – NO!

Despite the law, women do not report violence – there have been very few reports of health and safety violations, and those reported to the government by the NZPC are not treated. Only two rape lawsuits have been filed in the past nine years. Usually, women in prostitution move to another brothel as a solution to violence.

Despite the law, Lack of support and prevention of prostitution – New Zealand law did not allocate funding for helping women escape prostitution, although one of the conditions for enacting the law was, allocation of budgets to prevent entry into prostitution and for women who want to get out of prostitution. Data collected showed that, 85% of respondents expressed a desire to leave prostitution (this is an insufficient assessment because women in prostitution are always considering leaving, but only when they are given a realistic possibility. When there are no appropriate services, there is no motivation to leave prostitution).

Women who have survived prostitution and are active in eradicating prostitution in New Zealand, are trying to change the law and the public perception that sees prostitution as a profession, but as long as the New Zealand government adopts perceptions of an organization whose interest is to preserve the purchase of prostitution, their chances of bringing about change are extremely slim. How sad and frustrating is it knowing that Jacinda Ardern their Prime Minister, doesn’t have their back.

In the fight against prostitution, New Zealand has a lot to learn from Israel. On the last day of 2018, the Law Prohibiting Prostitution (Temporary Provision and Legislative Amendment 2019) was enacted. Alongside the law, a government decision was approved “Implementing the recommendations of the inter-ministerial team to reduce prostitution” With a budget of 90 million NIS, that enables the expansion of rehabilitation, employment, and health frameworks, among women and men in the various prostitution arenas.

Since the enactment of the Israeli law, 3000 fines have been handed out to men who have been caught buying prostitution. The enactment of the law is a moral marker for a society that does not reconcile with a reality in which women and men live in chronic violence and continuous exploitation. This is a groundbreaking move, on an international scale, which places the State of Israel at the forefront of the struggle against the consumption of prostitution and trafficking in women, the promotion of women’s status, and the protection of human rights.

About the Author
B.A. Criminology, M.A. Democracy Studies. Manager of "John School Israel" - Advocacy center for the prevention of consumption of prostitution. From 2005 one of the leaders of the fight against women trafficking, prostitution and pornography in Israel, and promiting the enactment of the law prohibiting the consumption of prostitution. Idit was awarded the 2010 "Israel Ministry of Justice decoration for activists battling trafficking" for playing a central part in the battle against trafficking for sexual purposes.
Related Topics
Related Posts