The Blogs
Michael J. Salamon
Apply for a Blog
Advertisement
Please note that the posts on The Blogs are contributed by third parties. The opinions, facts and any media content in them are presented solely by the authors, and neither The Times of Israel nor its partners assume any responsibility for them. Please contact us in case of abuse. In case of abuse,
Report this post. 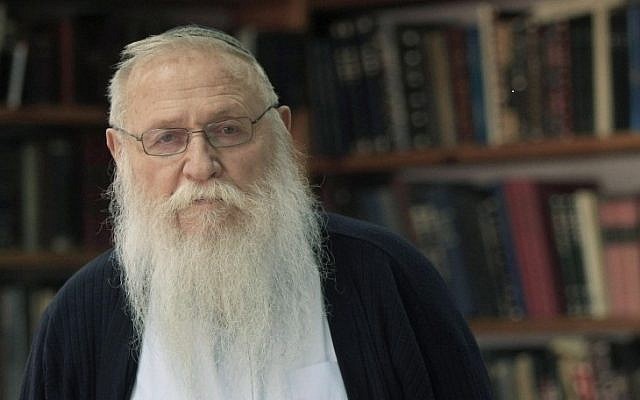 What can we say except, “Thank you, Rabbi Haim Druckman. You have shown that the Halacha regarding the Laws of Talmud Torah stated in Shulchan Aruch, Yorah Deah, 246, 8, should be carefully followed.”

This rule states clearly that “a rabbi who does not act properly, even if he is a person of great knowledge and everyone needs him, we are not allowed to learn from him until he shows himself to have been able to act properly” (translation is mine).

You have also provided support for the impression repeatedly voiced among the vast number of mental health clinicians that sexual abusers are likely to re-offend, and you have further shown that those with limited experience in this area should not be trusted to make decisions about granting pardons to sexual abusers.

And, no surprise, he abused a student, someone with credible evidence of the abuse he suffered at the hands of Elon, yet again. One can only speculate how you sleep at night now, or are you still refusing to accept Elon’s criminality?

There are some in the field of criminal rehabilitation who are staunch believers in the idea that pedophile abusers may not re-offend if given the proper treatment. What research does exist in this area, though, is extremely limited, only a select few abusers have been in treatment and for those who have been there is no longitudinal evidence to support their long-term recovery.

We are in the process of interviewing detectives and other officials who operate in special victims’ services area and related governmental positions in an extensive research project. To this point, what we have consistently been told by those we have interviewed is that, when caught, most abusers will admit only to about half as many victims as they actually abused –and abusers are the best prevaricators in existence. They are excellent at duping their victims, their communities, even their own families. I would not be surprised if still more of Elon’s students come forward with accusations against him. Our research clearly shows that abusers cannot be trusted. They are very likely to re-offend.

You apparently felt otherwise, or perhaps were charmed by his ability to fend off allegations.

Perhaps you thought that he learned his lesson and would behave properly. Maybe you decided he needed another chance. If that is the case, Rabbi Druckman, you are not alone.
I have heard all the arguments for giving abusers another chance:

And, the most disturbing,

It is terribly unfortunate that well-intentioned, but uninformed individuals tend to make decisions they are really unprepared for. In the work I do internationally in this field, I can say that the problem exists in all cloistered communities to a similar degree. That does not excuse the mistakes made that continue to place children at risk of abuse.

If we are to stand up to abusers and protect children that must be done in legitimate ways. That includes reporting them to the proper authorities who are trained and know how to act. Not to people who believe they have the best of intentions but are misguided by a lack of insight into the real dangers.

So Rabbi Druckman, I may sound like a cynic and for that I am sorry, but that is only because I see the pain abusers cause victims daily. That, I believe, affords me a certain right to be a skeptic. I do however truly believe that there is a lesson to be learned here and you have done that for us.

About the Author
Dr. Michael Salamon ,a fellow of the American Psychological Association, is an APA Presidential Citation Awardee for his 'transformative work in raising awareness of the prevention and treatment of childhood sexual abuse". He is the founder and director of ADC Psychological Services in New York and Netanya, the author of numerous articles, several psychological tests and books including "The Shidduch Crisis: Causes and Cures" (Urim Publications), "Every Pot Has a Cover" (University Press of America) and "Abuse in the Jewish Community: Religious and Communal Factors that Undermine the Apprehension of Offenders and the Treatment of Victims."
Related Topics
Related Posts
Comments