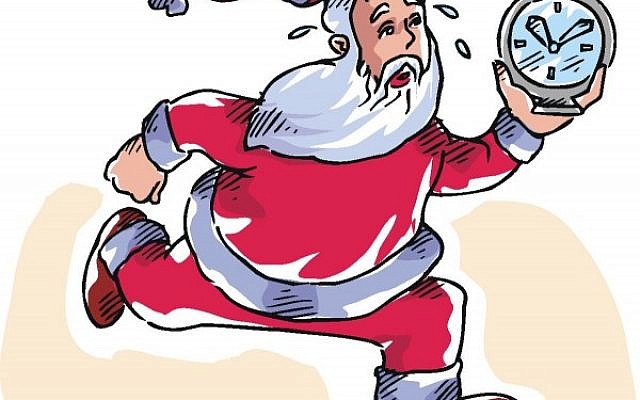 Sometimes my very religious friends in Israel, not knowing what they are saying, tell me they would love to come to visit me in New York at this time. Why? They say they love coming to New York in the winter. I know what they mean. They love Christmas. Some have called this Christmas Envy. Walking on down Fifth Avenue, seeing the lights, passing by Rockefeller Center, they won’t admit it, but they love it. Many Jews struggle with the guilt of Christmas. The progressive approach seems to be, why not just enjoy it. That is multiculturalism. Appreciate a little of each culture. I could not disagree more strongly with this. Christmas is not for Jews.

A recent article, written by a Christian titled “Christmas is for Christians”, argued:

The uniqueness of each faith must be maintained in spite of the proximity and affinity that goes with living in the same community and breathing the same air.
Beyond that, there is a spiritual orientation that dictates that we maintain the purity and integrity of our different faiths.
While I recognise the diverse religious practices that have become a part of our cultural landscape, we need to respect the core spiritual ideals of the religions that make up our society. To do differently is to compromise the very essence of our existence as followers of different faiths.

Sure, Christmas did become an American holiday and sure even those who aren’t Christian are excited by it, but Christmas is Christian. When they say “put Christ back in Christmas”, it is because Christ does belong right there in Christmas.

While the songs, the movies, the bargains and more are all so charming and magical, Jews should be able to enjoy our own uniqueness. No, the Mench on the Bench does not outdo the Elf on the Shelf, nor does Bubby out do Santa, so what. We aren’t competing. We are different. Did you ever feel bad for the non-Jewish children who don’t get blintzes on Shavuot, no apple and honey on Rosh Hashana, family time during Sukkot, no Afikoman hunt on Passover? If not please don’t feel bad for yourself not having Santa come by. We are different and that is what makes free society so beautiful. We don’t need to be the same to respect each other. We aren’t competing as implied in Adam Sandler’s “instead of one night of presents we’ve got eight crazy nights.” We are just different.

We would all be better off if we loved each other’s differences and felt comfortable with those. This may be a projection, but I feel like my friendships with those who don’t share my faith is much stronger because I am clearly an orthodox Jew. We know what we will for sure never agree on, and we explore what it is we can agree on. We respect each other’s differences and embrace a relationship that truly highlights coexistence.

While I don’t enjoy quoting myself, several years ago, in an article for The Hill, titled Radical Religion, Radical Tolerance, I wrote:

Those who ignore or downplay religious differences will never be able to foster a lasting solution for religious tensions…As members of a democracy that has not only been a paradigm of success in fostering religious tolerance, but that has nourished those differences to allow for the thriving of religion in a creative and healthy way, we must realize our unique role in this pivotal point in history…We [Americans] have created a model that proves that embracing religion, if done properly, is not only not an impediment for tolerance but fosters a far deeper and more meaningful level of tolerance.

This holiday season, I will enjoy my friends’ holiday cheer. I will enjoy the fact that while I do not partake in any of their celebrations, I still have deep respect, and positive regard for each and every one of them. I am moved by our friendship which transcends our religious or communal affiliations and looks forward to working with them on the values we do share, and ways we can partner to make this world a better place. While walking to synagogue in Manhattan I will still greet the young folks standing on the sidewalks who from upstate to sell Christmas trees — even as I march on humming Hava Nagila or other Jewish medleys.