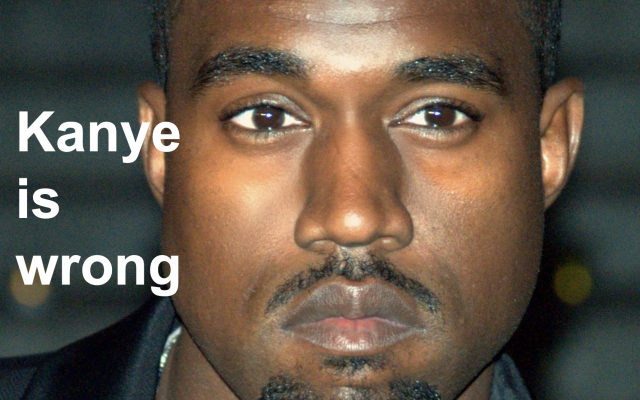 In the last few weeks, rapper Kanye West has been on a disgusting anti-Semitic tear, ripping the “Jewish Zionists” who he claims control the media, saying that greedy Jewish record labels are a form of “modern day slavery,” and threatening to go “Death Con 3 on Jewish People.” Additionally, Kanye is accused of having admired the Nazis, along with having an “obsession” with Hitler, and that he even wanted to name an album after him. He even mocked the Holocaust, where six million Jewish men, women, and children were viciously murdered, by saying, “Let’s visit our Holocaust Museum: Planned Parenthood.”

It’s truly unfortunate when a public figure like Kayne West spews such vile anti-Semitic hatred. Furthermore, the spillover effects can be frightening, as evidenced by a hate group raising a banner saying “Kayne is right about the Jews,” making other anti-Semitic remarks, and giving the Nazi salute on a Los Angeles overpass this week.

Certainly, as the son of Holocaust survivors, it is traumatic to have to listen to all this, and for most Jews, I know it is deeply triggering. It brings us right back to the horrible past.

All this brings to mind an incredible miracle that G-d performed in my life when I visited the U.S. Holocaust Memorial Museum in Washington, D.C.

One of the museum’s exhibits is of an actual cattle car train used by the Nazis to transport Jews to the infamous Auschwitz concentration camp. I remember how startling and frightening it was to see that they had not just the likeness of a transport train but the real thing. These trains were literally a death transport for the million Jews herded like animals to their brutal deaths. 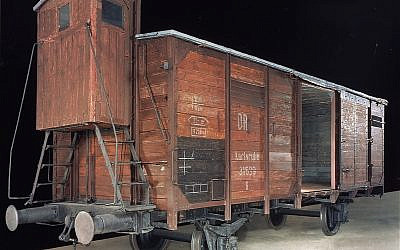 At the exhibit (pictured above), I’m not sure that I was supposed to do this, but being a very tactile person, I reached out to touch the train car, maybe partly because I could not believe this was the real thing where such unbelievable horrors had occurred.

As soon as I touched it, something happened to me. For a moment, everything went black, and I had a flashback to literally being there with the real people who had been crammed into these cattle cars without food, water, toilets, or even enough air to breathe. I could see their faces and hear them scream. First, I thought maybe I had a vivid imagination and that all the studies I had done on the Holocaust and my family being survivors had really had an impact on me. But then something else happened. When I left the museum, I started to feel an intensely sharp pain in the side of my neck! At first, I tried to ignore it, but over the course of the day, it got worse and worse, and before I knew it, I was unable to breath and was in distress. Basically, it felt like I was actually choking to death, and it was clear that my life was literally in danger. I ended up in the emergency room where the doctors weren’t sure what was happening to me, so they started a whole battery of tests. Strangely enough, the tests all revealed a very deep tissue infection right on the side of my neck, and based on the immediate danger to my ability to both breathe and swallow, the doctors came in to talk with me about the need to perform emergency surgery. Obviously, this was all quite unbelievable to me: Just a few hours prior, I was at the Holocaust museum and had simply reached out to touch history, and now my life was hanging in the balance. They put me under observation overnight and even prepped me for surgery, but again, bizarrely enough, by morning, the infection that was literally choking me to death disappeared just as mysteriously as it started. None of the doctors could explain it.

Within a span of 24 hours, I had traveled back in time to the Holocaust both emotionally and physically, and had been saved. I am left with this mysterious and unexplained supernatural event in my life (and it’s certainly not the only one). Honestly, it was a dangerous and frightening situation, and I am so grateful that Hashem saved me. I know that G-d still has a mission for me, one of which is to fight for good over evil, particularly anti-Semitism and all forms of Jew-hatred. What Kanye West has been saying clearly falls into the rhetoric of the Holocaust. I can only hope that he one day realizes that no matter how he “feels,” hate words have consequences that he cannot control.

As for myself, I will say never again like a sheep to the slaughter on the cattle cars. We must scream full-throated every day against hate and injustice.