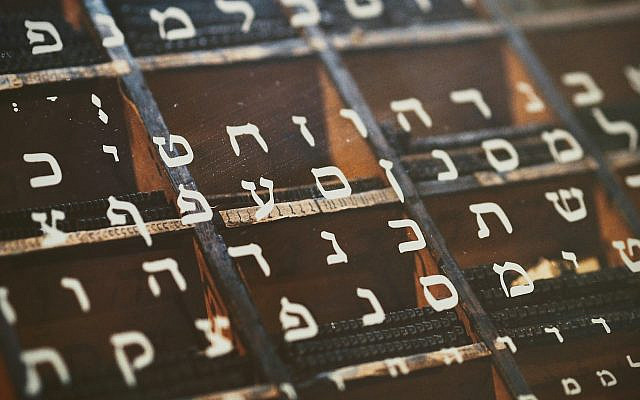 Photo by Natalia Yakovleva on Unsplash

My 92-year-old mother can read an article or a book in Hebrew, and speaks the language beautifully. She is the product of a Yeshivah of Flatbush education in the 1930s and 1940s and she attended Camp Massad for several summers as a counselor and division head, where Hebrew was spoken even in the hallways and on the ball fields.

In contrast, my Hebrew speaking skills are extremely poor… and even my Hebrew reading skills are mediocre at best.  I attended day schools where Tanach and Gemara were taught in English. Hebrew language and literature classes were a joke, often taught by Israeli teachers literally “just off the boat” who struggled with their English and had little ability to discipline a class of rowdy youngsters who had no interest in learning Hebrew.  I did not attend a gap year program in Israel, which afforded students another opportunity to really learn Hebrew. (Back then, except for BMT, all of the yeshiva programs open to American students were integrated with Israeli students, with classes taught in Hebrew.)

The history of teaching Hebrew language and incorporating an Ivrit b’Ivrit program into schools is an interesting story in itself. It was suggested more than 100 years ago, not merely as a teaching tool but as a symbol of Zionist passion. Aliyah was not encouraged at this time, but the Hebrew language played the role of a substitute homeland. By insisting on modern spoken Hebrew as the language of Jewish education, these pioneers were able to teach a couple of generations of Jewish students spoken Hebrew, both in day schools and in Sunday school programs.

Today, of course, the environment is very different.  Aliyah is strongly encouraged in our schools, but most of our day schools (with a few exceptions) are not employing a full Ivrit b’Ivrit program into their curricula.  Gap year programs in Israel, for the most part, are all teaching Tanach and Gemara in English, catering to the majority of day school students who don’t possess the skills to speak Hebrew fluently.

For several decades, I have not been a proponent of teaching Ivrit b’Ivrit in our yeshiva day schools, for many reasons.

First of all, Hebrew is a language that is foreign to American born students, and needs to be treated as such in order for them to master it sufficiently. I know that the hard-core Zionists would argue that Hebrew is not a foreign language.  That might work from an emotional standpoint, but from a teaching perspective, it simply interferes with the process of learning.

Second, if we want to maximize the amount of Tanach and Talmud which our students will learn, teaching in the student‘s native language saves a great deal of time in the classroom.  As professor Moshe Bernstein of Yeshiva University has pointed out, if a student thinks in English, translates into English, and asks questions in English, he or she will be able to learn more effectively than a student who has the additional task of dealing with a foreign language.

Gemara is hard enough for a fifth or sixth grader to learn, as the Aramaic language poses a very difficult challenge for students who begin learning Talmud.  Why complicate things by introducing a third language when explaining the many nuances and halachic discussions incorporated into the Gemara? Wouldn’t we want our kids to be operating linguistically in their primary language?

Third, I find it offensive that there are those proponents of teaching Ivrit b’Ivrit who feel that by not teaching in this manner, you are not being a good religious Zionist.  There certainly is a religious Zionist component in teaching limudei kodesh in Hebrew; however, to suggest that those who did not learn in this manner are less committed to Israel is insulting.  There are hundreds, if not thousands, of young men and women who are products of a yeshiva day school education and who did not learn limudei kodesh in Ivrit b’Ivrit, yet who have served in the IDF, visit Israel regularly, or have made aliyah.  They are just as supportive of Israel as those who may have studied in an Ivrit b’Ivrit program.

Finally, I think there are some wonderful Tanach and Talmud teachers who are simply not very fluent in Hebrew, and who don’t have the desire to change their approach in the classroom.  Yes, we can certainly demand that these teachers instruct their students in Hebrew … and provide them with the necessary tools to teach Ivrit b’Ivrit.  But if they are not going to be happy doing that, and don’t believe that it’s conducive to their own teaching skills and to the benefit of their students, are we doing them any favors by insisting on it?

So why have I changed my thinking on this subject?  Well, a couple of things have happened to me recently, which has made me reconsider my position.

The first happened at the day school which my grandchildren attend.  My wife and I attended a Hebrew play, in which our eldest granddaughter, Sarit, took part.  Needless to say, we were very proud of her, as we watched her participate in the performance with a small speaking part in Hebrew.  Her Hebrew was magnificent, as she spoke with confidence and grace, clearly understanding what she was saying.  The words rolled off effortlessly from her tongue.

Since then, I’ve been privileged to see her read Hebrew at our seder table and write beautiful sentences in Hebrew on her own.  Clearly the fact that she has been exposed to the Hebrew language at a very early age has not interfered with her ability to master educational challenges. In fact, I believe it has helped her.

The second thing that has changed my opinion on the subject relates to a personal experience.  Recently I have been delivering shiurim approximately once a month on Shabbat, after the 8AM chapel minyan at our shul.  Many of the classes require delving into the texts and the many responsa and commentary associated with the subject.  Thankfully, most of the sources have been translated to English (shoutout to Sefaria.org), but oftentimes I will come across a relevant passage that is not translated into English.  And I struggle deeply with understanding it.  Oh, how I wish my Hebrew skills were better!

I realize that there is a difference between modern spoken Hebrew and the Biblical Hebrew of the Tanach and the Hebrew language our commentators used.  Nevertheless, I can safely say that if I had been better grounded in Hebrew as a student in yeshiva day school, no doubt I would find it much easier to understand the various texts and passages that I am trying to teach to others in my shiurim.

So I admit I have changed my opinion somewhat on this issue.  And while I won’t be critical of schools that choose to teach limudei kodesh in English, I do feel the positives might outweigh the negatives by employing an Ivrit b’Ivrit program in our day schools.  I encourage readers to continue the discussion on this subject, by offering opinions about their own experiences. There are good arguments to be made on both sides.