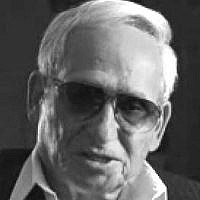 The Blogs
Alexander D. Hirschman
Apply for a Blog
Advertisement
Please note that the posts on The Blogs are contributed by third parties. The opinions, facts and any media content in them are presented solely by the authors, and neither The Times of Israel nor its partners assume any responsibility for them. Please contact us in case of abuse. In case of abuse,
Report this post.

It was in December, 1932, the year an election took place that changed the world forever. For years Adolf Hitler was preaching his vile antisemitsm in Germany but most of the world, especially most German Jews, did not take him seriously. People did not believe that the country that produced Beethoven could elect such a vile man. But elect Hitler they did. In a fully democratic election Hitler obtained a plurality and the following month he became chancellor of Germany.. He then began to implement his plans to wipe out European Jewry.

This week there will be another election with frightening parallels. A vile antisemite, a supporter of Holocaust deniers and countries and organizations that want to see the state of Israel with 9 million inhabitants wiped off the map, is running to be prime minister of the United Kingdom. The world has know about this antisemite for years but outside of the UK pretty much he was not taken seriously. Fortunately, British Jews are not ignoring the threat like their brethren did 87 years ago. However, like German Jews in 1932 they are not even 1% of the population. There is little they can do but hope and pray that most Englishman will not cast their vote for the Jew hater Jeremy Corbyn.

So as scary as Corbyn is, might he really be the next Hitler? Fortunately not. He might support countries who want to commit genocide, but to date there is no record of Corbyn himself encouraging Britain to become directly involved. It is also highly doubtful the British people would support such a campaign, despite instances in their history when they kicked the Jews off their island.

Of course the biggest difference is the existence of the State of Israel. If British Jews wish to leave, if they need to leave, or if, horribly, they have to leave, there is a Jewish country that will accept every one of them. Sadly, there was no country willing to accept the Jews back in 1932.

Let us all hope that British morality has evolved since the 19th century and that most Brits realize that Corbyn embraces all the failed ideologies of the 20th century that have no place in the 21st century. If you catch my drift.