On Thursday afternoon, I, like many of us, got together with many members of my family to enjoy Thanksgiving dinner. Afterwards, we decided to watch a movie, The Farewell. 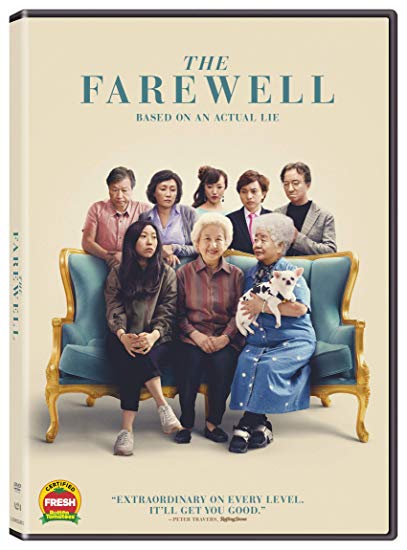 The movie opens with the following words written across the screen: “Based on an actual lie.” At the start of the movie, the main character discovers that her beloved grandmother, affectionately called “Nai Nai,” has just been diagnosed with cancer and has maybe 3 months to live. The whole family has decided to come visit her in China from all over the world, but there’s a catch– they aren’t telling Nai Nai that she is dying. Apparently this can happen in China– doctors talk to family members, and they can choose to keep key information from a patient. The family decides to shield Nai Nai from the pain of knowing about her condition, hoping to make the limited time that she has left as enjoyable as possible. To provide a pretext for the family visits, one of her grandchildren is marrying his girlfriend– and this wedding provides a pretense for everyone to make their final goodbyes.

At various points in the visit, different characters almost break down in front of Nai Nai. The grandson who is getting married nearly dissolves into tears in almost every interaction he has with his grandmother, and the main character regularly has to come up with excuses for her worried facial expressions. There’s a lot that we could say about the decision of the family members to keep this secret, but the question that I had is, did Nai Nai really not know that something fishy was going on? During the whole movie, she is the lone character who is consistently positive and upbeat, and as far as we can tell, she genuinely seems not to know. But is it possible that she has noticed the clues, and chooses to ignore them? Might it be that she doesn’t know because she doesn’t want to know?

In our parashah today, we have another story of a person who might have deluded himself into believing something that he wants to be true. Isaac has grown blind, and having summoned his son Esau to give him a blessing, he waits for his son to hunt, cook, and serve him some meat. When a young man walks into the room saying, “It is I, Esau your firstborn!” Isaac initially suspects that something is up. He feels his son’s arms, and feeling the animal skins that Jacob has attached to his body in order to make him feel more like the hairy Esau, Isaac says it clearly, “The voice is the voice of Jacob, but the hands are the hands of Esau.” Now that could have been the end of the story. Isaac could have correctly identified his son Jacob, reprimanded him, and kicked him out of the room. Then some time later, Esau would have arrived and received his blessing, and that would be that. However, that’s not what happens. Instead, Isaac believes his son.

Now, we could read this as the story of a son taking advantage of his father’s disability. Isaac, having lost his sight in his old age, no longer trusts his own perception of reality. Jacob, knowing that his father has lost his confidence along with his sight, uses that to his own advantage, and insists on imposing an alternative reality upon his father. I think we should take that message to heart, of the absolute egregiousness of manipulating a person in such a cruel way.

However, there’s another possible dimension to this interaction. Isaac has already correctly identified the voice he hears as Jacob’s, and it’s hard to believe that tying goat skins around a person’s arms really manages to accurately reproduce the feeling of a hairy arm. Is it possible that Isaac actively chose to go against his own perception of reality, to trust his son against his better instincts, because he couldn’t bear the thought that his son would deceive him? We can only imagine how much it might pain him to think that his own son, albeit his second-favorite son, might trick him, and might do so to cause his brother harm. Is it possible that Isaac couldn’t handle that possibility, and therefore chose to “go with the flow,” thus putting off for a few more minutes the revelation that his son is a liar and a thief?

The medieval commentator Rashi also seems to have a problem with seeing Jacob as a liar. When Jacob presents himself to Isaac, pretending to be Esau, he says “It is I, Esau your firstborn.” For us reading the text, we see that Jacob is lying in order to steal his brother’s blessing. Rashi, however, reads that line differently. Rashi re-punctuates Jacob’s statement. Instead of “It is I, Esau your first-born.” Rashi reads it “It is I! [pause] Esau is your first-born.” At first read, this interpretation of Rashi’s feels patently ridiculous. Jacob and his mother Rebecca have collaborated to trick Isaac, and they succeed– Isaac gives the first-born blessing to Jacob. Rashi’s reading seems childish, like a child interpreting an instruction so literally so as to get themselves off the hook for something. Rashi is so averse to seeing Jacob as a bad person that he twists himself into knots to defend him, and puts forth the best defense that he has, as thin as it may seem.

The desire to defend the patriarchs against those who might criticize them isn’t unique to Rashi. Earlier in our parashah, the Torah tells us that Isaac and Rebecca each had their favorite child: Isaac loved Esau best, and Rebecca preferred Jacob. The medieval commentator Sforno was disturbed, not by the fact that each parent had a preference, but by Isaac’s choice. Our ancestor is Jacob, not Esau! He must have been the more righteous of the brothers, given that he is our ancestor, and that God chose him– so why in the world would Isaac prefer Esau? What does that say about Isaac, who is also our revered ancestor, if he had such bad judgement? Sforno’s answer, like Rashi’s, is to read the text hyper-literally. Where the text says, “And Isaac loved Esau,” Sforno reads “Isaac also loved Esau (and not just Jacob, who of course he must have loved.) even though he unquestionably knew that Esau was far less perfect than Jacob.” In other words, Sforno completely turns the text on its head.

I’m not bringing up these examples simply to criticize Rashi, Sforno, or Isaac. There’s actually something beautiful in what they do. They all love someone very much, and their love leads them to be extremely generous towards that person. The Talmud tells us that we should be “דן לכף זכות,” to give other people the benefit of the doubt, to assume other people’s good intentions, and all three of these individuals do that extremely well. Isaac loves Jacob, (even if his favorite is Esau), and can’t bring himself to believe that Jacob would lie to him, so he finds a way to believe him, at least for the moment. Rashi loves our ancestor Jacob and can’t bear to see him as a liar, instead looking for every possible way to read his words as truthful. And Sforno, believing Jacob to be a better person than Esau, can’t bring himself to believe that our beloved ancestor Isaac could have such bad judgement and be such a bad parent as to not love his son Jacob, and so he fills in what he sees as missing details from the text.

On the other hand, there is an obvious danger in taking the principle of judging people favorably too far, particularly when we only extend that treatment selectively. The temptation to believe what we want to believe is extremely strong, and I think it’s something that many of us can relate to. Rashi and Sforno identify with Isaac and Jacob, and want to see the best in them. They see Esau as “other,” as “the enemy,” and so they are less likely to cut him any slack.

Are we really immune to this tendency ourselves? It’s easier to identify this behavior in others than in ourselves. We look around and say, “how is it that other people believe obvious lies, simply because those lies are coming out of the mouths of people they support? And how is it that they don’t believe obvious truths, simply because they don’t personally like the people speaking them, or because those people are from a different political party?” But is it possible that we ourselves can fall into this trap too? I’m not saying we all do it to the same extent, but I think many of us do want to read our own actions, and the actions of people we identify with, generously. And we do have an instinct to read the actions of people that we don’t identify with more harshly.

On this weekend of Thanksgiving, a time of gratitude and coming together, I hope that we can take the moment to try and extend our generosity of spirit to everyone, including to those from whom we feel disconnected. And at the same time, I hope that we can notice the ways in which each of us can, at times, be tempted to see the world the way we want it to be, instead of the way it is. If we can manage to see the world in a more balanced way, hopefully that can bring us all closer to each other, to heal the bitterness between those who identify with Jacob and those who identify with Esau, and to help us make the world a more harmonious place.