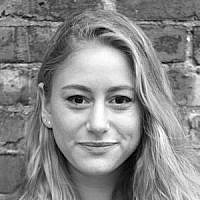 The Blogs
Chaya Block
Apply for a Blog
Advertisement
Please note that the posts on The Blogs are contributed by third parties. The opinions, facts and any media content in them are presented solely by the authors, and neither The Times of Israel nor its partners assume any responsibility for them. Please contact us in case of abuse. In case of abuse,
Report this post.

Years to build, minutes to destroy.

It has been a noisy week with construction workers and their toys tirelessly demolishing the apartments across from me. Hearing the loud smashes and crashes of wood, bricks, and metal was unpleasant and initially a little frightening.

The destruction got me thinking about the process of construction and all that it entails. From the initial stages of architecture and engineering to inspection, installation, plumbing, painting and interior design — there is no shortage of work involved. The attention to detail required at every step of the process, physically strenuous labor, time, money, and effort invested, is no small feat. And yet, despite these challenges, we continue to build.

Houses, apartment buildings, malls and supermarkets are not the only things we build. Career building can take decades of investment. Let’s take a cardiologist, for example, who spends four years in undergrad, four more intense years in medical school, followed by a three-year internal medicine residency and another three years of cardiology fellowship. After fourteen years of rigorous training, the newly minted physician specialist faces the entrepreneurial challenges of establishing a practice and all that entails.

Like career building, our economy is the product of centuries of laborious construction. There are many different theories about the ingredients for healthy economic development, be it the encouragement of entrepreneurship and innovation or physical and human capital. Certainly building a healthy and sustainable economy requires strong global economic architecture, and we can all agree that the construction of a thriving economic superpower takes work.

Similarly, building one’s personal reputation can take years of arduous work. Consistent honesty, treating others with respect, acting with dignity and integrity, are all features of a stellar reputation. Most of us can point to individuals in our community who are unanimously regarded as upstanding and trustworthy.  I personally know of such a jeweler who has established a rock solid reputation, so much so that clients will continue purchasing jewelry from him even after moving to a different state or country. In fact, I have heard numerous people say about this jeweler that they would confidently buy a diamond from him without even seeing it.

Despite the work it takes to build, people routinely encounter situations that can damage or destroy their hard-earned reputations. The cardiologist may be cruising through life with a flourishing practice and repaid student debt, but one slip-up and out come the malpractice attorneys. Fourteen years of career building can be wrecked in a day.  One dishonest deal or an inappropriate relationship is all it takes for a businessman’s reputation to fall to pieces.

In his book Too Big to Fail, Andrew Sorkin chronicles how the greatest financial crisis since the Great Depression developed into a global tsunami. The book highlights the irrational belief that the economy was innately stable. The greedy bankers, brokers and traders, supported by government agencies and law-makers, made one irresponsible and perilous business decision after another, all in an attempt to line their own pockets at the expense of the public.

During the 2008 financial crises, the real estate market ultimately went bust. The subprime mortgage market collapsed, followed by a full-blown international banking crisis and global economic meltdown. The high and mighty banks – Lehman Brothers, Merrill Lynch and Goldman Sachs, just to name a few – who believed they were infallible suffered tremendously and paid a steep price for their unscrupulousness. The Great Recession serves as a personal reminder that no one is exempt from failure.

The loud noises gradually quieted and the construction workers slowly disappeared around me. I felt a newfound appreciation, not just for the silence I usually take for granted, but for the powerful lesson I learned: be cognizant of what you are building and recognize how easy it is to destroy.

After the rubble was carted away, what was left was a blank patch of land, ready for development. Likewise, the stock market eventually bounced back, only to reach record highs across all indices. And we are reminded of the cyclical nature of life. After destruction often comes rebirth, resurrection, and restoration.

About the Author
Chaya is 26-years-old and the oldest of four children. She is originally from Melbourne, Australia, and currently living in Chicago where her husband is completing his Internal Medicine residency training. She holds a Bachelor's in Behavioral Science and a Masters in Special Education. For over 2 years, she has been working for the Aleph Institute, a non-profit that provides physical, emotional and financial support to families as well as those in prison and or in mental institutions. She is particularly passionate about her work with Project Tikvah, a division of the Aleph Institute that focuses on breaking the vicious cycle of struggling youth battling addiction, incarceration, and mental illness.
Related Topics
Related Posts
Chaya Block
Comments