When speaking to audiences of Jews, Lithuanian officials twist themselves into knots to lessen any impact of the Holocaust. These performances are insincere and insulting. 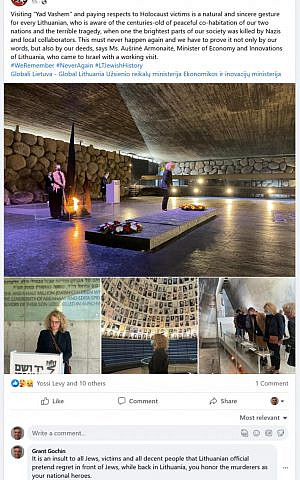 Even as Lithuania sheds crocodile tears, back home in the fatherland, they admire, decorate, and make public display of their “national heroes”. They have no regard for the fact that many of these fabricated heroes were in fact cold blooded mass murderers of so many Lithuanian Jews.

When it comes to Lithuania’s contra accusation demanding “denazification” of Russians invading Ukraine, Lithuania has only empty speech, since they have never bothered with their own denazification, and are quite willing and enthusiastic to bend, or ignore any truths about collaboration.

In their post above, the Government of Lithuania state that they want to prove their regrets by “actions in addition to words”. I have offered them countless opportunities.

For nearly a decade, I have actively pursued a strategy pleading with Lithuania to repudiate their national honors awarded to murderers of Jews. All pleas have fallen on deaf ears. Instead, the Lithuanian government, courts and other institutions have coalesced to reaffirm their devotion and “head in the sand attitudes” when dealing with their murderous genocidal “heroes”. I myself am regarded by the Lithuanian Government as a criminal.

My focus has been on Jonas Noreika, the Lithuanian who was responsible for the murder of my own family. Sadly, Noreika is only one of many murderers of Jews worshipped as national heroes. There is an entire government department dedicated to rewriting history into a national fraud. Even Noreika’s own granddaughter, Silvia Foti, has repeatedly asked the Government of Lithuania to let the truth out. Her book The Nazi’s Granddaughter: How I Discovered My Grandfather Was a War Criminal is a searing memoir of how one Lithuanian has come to terms with the dark past, and it has gained international attention. This remains a futile request as the country insists on thanking and enhancing the pantheon of eliminators of Lithuanian Jews.

Lithuania takes advantage of the freedom to set its own national values and mores. They have set their own judgements and standards which are, in essence, racist, homophobic and disavowed by the international organizations they have joined, particularly, the European Union. They continue to preach their false narratives.

On page 21 of the European Union’s strategy for battling antisemitism it says Holocaust denial, the distortion of facts and their belittlement, are often used to spread hatred against people of Jewish ethnicity and in the attempt to re-write European and Jewish history. It says “hate-speech connected with approval for the Holocaust, denying the Holocaust or grossly belittling it” are forbidden under the EU’s Framework Decision for combating racism and xenophobia.

The Government of Lithuania has confirmed its awareness of these forbidden national ideologies. In the fall session of the Lithuanian Parliament in 2020, the Human Rights Committee’s report indicated the Committee had acquainted itself with the work program of the European Commission and had selected three European Commission initiatives as urgent or extremely urgent for the Lithuanian parliament’s Human Rights Committee:

In fighting Holocaust denial and the distortion of facts, the European Commission used the definition provided by the IHRA (International Holocaust Remembrance Alliance), which says Holocaust denial in its various forms is an expression of antisemitism.

It is an attempt to deny the genocide of the Jews by making efforts to relieve national socialism and antisemitism from fault and responsibility. The distortion of the facts of the Holocaust is considered an intentional effort to write off or diminish the consequences of the Holocaust or basic parts of it, including collaborators and the allies of Nazi Germany.

In implementing the EU’s strategy for combating antisemitism, member-states are called upon to participate actively in consciousness-raising campaigns concerning Holocaust denial, the distortion of facts and their gross belittlement.

By this very definition alone, Lithuania is an unashamedly antisemitic state. Near-constant adulation and worshipful displays continuously push the false narrative within their national antisemitism. Still, their inactions are buoyed by their misrepresentations of a genocide they perpetrated.

Having endorsed the international definition of antisemitism presented by the International Holocaust Remembrance Alliance (IHRA), their revisions and distortion of Lithuanian participation in the Holocaust, remain the “true” curriculum espoused by their educational system. Thus they have cheapened the IHRA statement and made it a simple bunch of waste paper. EU member states are expected to participate in campaigns concerning Holocaust denial, the distortion of facts and their ethnic belittlement. It is, quite simply beyond the scope of Lithuania. Lithuania is, by definition, an antisemitic state.

The prior Lithuanian Foreign Minister Linkevicius officially stated: “Antisemitism has absolutely no place – neither in Lithuania, nor in other parts of the world.” This places Lithuania’s words as diametrically opposite their actions, resulting in a battery of untruths. Their words are utterly worthless. Their actions still retain their historically endemic hatred of Jews.

I have presented numerous requests to amend, if not repudiate such deep antisemitism. Additionally, I asked them to begin telling the truth about the Holocaust in Lithuania. This is a binary choice for the government of Lithuania: begin a genuine denazification process. They must assume and demonstrate a current ideology that does not glorify or hide the murderous veracity of the Lithuanian perpetrators.

There is no sincerity in their storied official statements, which in turn proves that they have no intention of fulfilling and carrying out any of the promises they have agreed upon.

Vignettes of misrepresentation completely depend on the acting abilities of Lithuanian Government Ministers such as Armonaite (in the Facebook post above). Minister Armonaite may be personally sincere and should be welcomed at Yad Vashem as a private citizen. There should be no official Israeli acceptance of these performative displays. Somehow, Lithuania has perverted the memory of six million murdered Jews to claim the hideous perversion and fantasy that Lithuania continues to present. No Lithuanian government statement or official should be accepted in any capacity at Yad Vashem or indeed at any Holocaust memorial or event until Lithuania shows even the smallest attempt to place the blame for the Lithuanian Holocaust on those they still revere. Our murdered families and destitute cemeteries are not props to represent regret or sorrow. They use mass murder to engender tourism. Their schoolbooks still laud Holocaust perpetrators as national heroes. In this way they murder our families again.

The Lithuanian Government publishes entirely fraudulent Holocaust facts and figures. These “facts” are now entering the American educational consciousness, undoing eighty years of American Holocaust education. My colleagues in academia have found that their excellent curricula of teaching tolerance and quashing hate is pummeled to the ground by far right, far left and all the rest of the lunatics that will rewrite history. 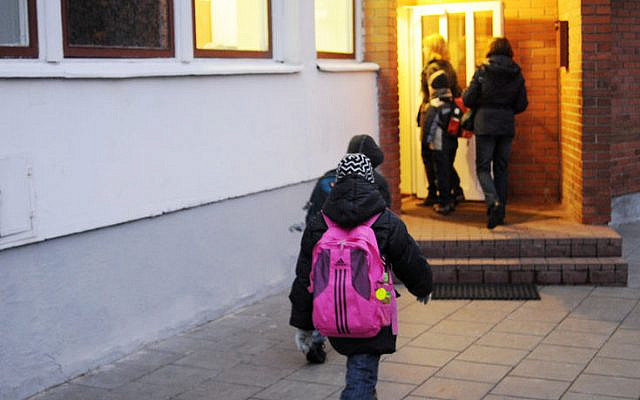 In the photo above, a small child steps blithely into the Jonas Noreika School, where she will be taught to twist and ignore the entire Lithuanian participation in the Holocaust. In this way, children are indoctrinated into the horrendous ideology put forth by their namesake “National hero”.

As horrific as Lithuania’s past inherent antisemitism was, they have continued their distorted historical agenda. As of right now, (April 2022), Lithuania still has those who insist on obfuscating the shameful true facts of Lithuanian enthusiastic participation in spearheading the Holocaust. Within the last few days, in Vilnius, a monument to the thousands of Lithuanian Jews slaughtered has been vandalized. In response, the US Ambassador issued a statement: which concluded with: “Just as we reject the Kremlin’s false justification of so-called “denazification” for its war in Ukraine, so too must we reject attempts to distort the history of the Holocaust in Lithuania. Hatred and lies have no home in Lithuania.” 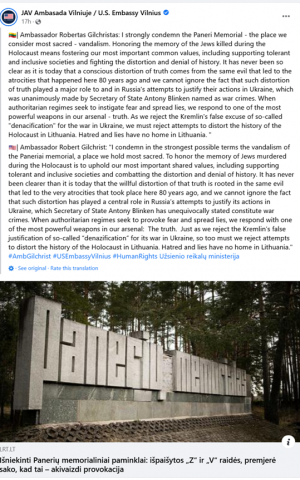 This is yet another significant example of Lithuanian distortion on the world stage.

No matter how slick the Lithuanian distortion, the fact remains that Jew-hatred is a comfort too entrenched to amend. It is yet another layer of grief for those who lost relatives and friends at the hands of “heroic” Holocaust perpetrators. How long must we mourn this monstrous denial? Indeed, will the murdered Lithuanian Jews ever have the dignity of truth? The charade continues.

A new path to progress, hinted at by the Lithuanian Embassy in Israel says they will display proper values and virtues. This cannot happen unless the very first step is of truth telling. This alone is uncharted territory for a country steeped in Jew-hatred but is the only way to forge a new path to international progress and acceptance. This “denazification” gives Lithuania a choice ahead of them in parliamentary procedures.

The Government of Lithuania has blatantly ignored the objections by US Congress about their misuse of US Congressional documents for nefarious purposes of Holocaust revisionism. They have ignored the identification by IHRA and the US State Department as Holocaust Revisionists. They have dismissed all Holocaust revisionism legal actions out of hand, using fabrication and very narrow technicalities. They avoid any factual intervention. They will, no doubt, ignore the statement from the US Ambassador. Their consistent actions belie their platitudes that actions will follow words.

These dangerous unchanging beliefs will continue and the world will just have to watch and wait. There us little hope that there can be any sort of a righting of wrongs. Words are dangerous weapons. Silence is compliance.