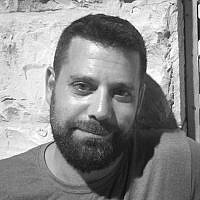 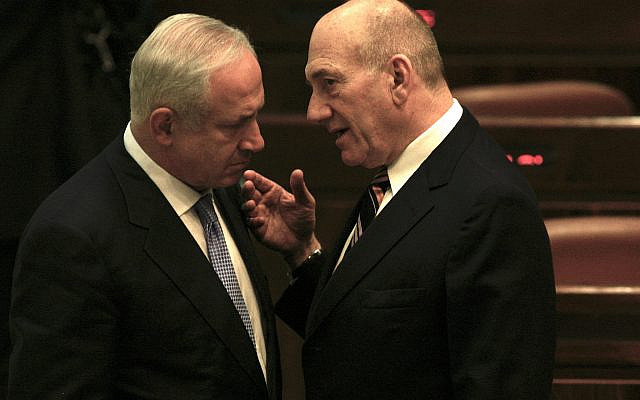 Outgoing prime minister Ehud Olmert speaks to the new prime minister Benjamin Netanyahu on the night of his inauguration at the Kneset. March 31, 2009. (Yossi Zamir/FLASH90)

Last week during a brawl in the Knesset Arrangements Committee, Likud MK David Amsalem howled at the committee chair, Yesh Atid MK Boaz Toporovsky, that he needed “hospitalization” – Hebrew code for being committed to a psychiatric hospital. In 2019, the Likud campaign accused Benny Gantz of “paranoia” during elections. And, in the most egregious current example of the weaponization of psychiatry in Israeli politics, former Prime Minister Ehud Olmert has of late repeatedly insisted that the Netanyahus are mentally ill.

Olmert, not a medically trained professional and with no legal standing in determining if someone is ill or in need of mental evaluation, has called for the Netanyahus (Benjamin, Sara and Yair) to hand over medical records that are protected by law, as if mental health records should be made public at the demand of any politician, former or current.

But why should a medical condition be viewed as an insult? Where are the psychiatrists demanding that politicians cease using medical conditions as a cudgel to denigrate their opponents? Why are they not explaining that this practice harms the lives of Israeli citizens who are suffering and have done nothing wrong?

Implying that those with psychiatric diagnoses deserve contempt and blame helps feed Israeli society’s inhumane treatment of those who are called mentally ill. Those who, like me (and I know of many), have experienced abuse in the psychiatric care system are delegitimized, caught in a trap in which those we accuse of abuse are the doctors who diagnose us. And the ease with which those making the claims are so easily dismissed evidently absolves the media of its responsibility to investigate abuse in hospitals.

In response to Netanyahu’s charge of defamation, Olmert insists he does not view the mental illness label as derogatory. But those of us with the diagnoses may see it otherwise. Olmert’s accusations have already caused great damage to our dignity and sense of self-respect.

And they are part of a familiar pattern. We saw it during the March 2019 Knesset campaign, when the Likud party defied all decency by using psychiatric framing as a weapon against Benny Gantz (the same Gantz who would later become minister of defense under the Likud’s own Prime Minister Netanyahu).

The Likud attacked Gantz over his accusations of corruption in the submarine deal, saying, “If Benny Gantz is showing signs of advanced paranoia after two weeks of pressure during the election campaign after his phone was hacked, how can he run the country?”

No medical support was offered for the assertions that Gantz was suffering “advanced paranoia.” But for those who do suffer from paranoia, such as schizophrenics, those with mania, those with PTSD and those with anxiety, the damage was done to their self-respect and standing as legitimate citizens in Israeli society. Paranoia became a weapon for attacking political opponents.

Why is this so important?

Many of us served in the IDF, in my case as a lone combat soldier. I served twelve years in the reserves. I have a degree in political science from Hebrew University. I have worked a variety of jobs and paid my taxes. And I became schizoaffective in my thirties, as my life fell apart.

When I first asked Bituach Leumi, Israel’s national insurance provider, for assistance with my PTSD and provided Bituach Leumi with all required documentation proving I was present at terrorist attacks during the Second Intifada and treated at the time in the ER, and that I had PTSD, I was accused of acting suspiciously for not asking for help immediately after the attack. Although I countered that PTSD does not have a timeframe, they said I was trying to scam the state for money, and denied any and all assistance.

After a year of flashbacks, I began hearing God and seeing angels, demons and spirits. My psychiatrist says that had the PTSD been treated sooner, my schizoaffective disorder, a bi-polar/schizophrenia hybrid, may not have taken over my mind and landed me in psychosis. I know others who have similar stories.

We, many of us soldiers and victims of terror, are the ones our elected representatives hurt with their reckless and harmful weaponization of psychiatry for political gain. We are often failed by the state, failed by Bituach Leumi, failed by the hospitals, overmedicated, delegitimized by society and given meager sub-poverty level disability to survive.

The weaponization of psychiatry in Israeli politics, even if only rhetoric, causes severe harm to the dignity and self respect of Israelis who have what are called “mental illnesses.” (Keep in mind that, because the DSM is updated every two years, today’s “mental illness” may be tomorrow’s “thought disorder.”) In Israel, being called mentally ill is a societal and professional death sentence.

I have learned much about what people face, from massive depressive episodes to manic highs to hypersexualiation with behavior resulting in undeserved shame to being feared for hearing voices to being accused of being a danger to society. The politicians, I suspect, have no idea what we, the “cholei nefesh” as they call us in Israel, face. But they use the terminology as free ammunition and are causing incredible harm to the innocent.

Granted, Israel’s political structure isn’t weaponizing psychiatry to execute the unwanted as German Nazi “doctors” did, or using mental illness as a way for the party to go after its enemies, as was done in the USSR with diagnoses of “sluggish schizophrenia,” and throughout the communist bloc. But these dark episodes spotlight psychiatry’s shameful record of harming the innocent. Those in the profession, therefore, have a historic as well as professional and moral obligation to protect those who are not heard from the politicians weaponizing psychiatry.

Israeli psychiatrists have enormous power under Israeli law regarding institutionalization. They hold the lives of their patients in their hands. So where are they? Why are they not screaming at the politicians to stop as the politicians scream accusations of “mental illness” at one another? Who is in charge of diagnosing disorders of the mind in this country and ensuring medical conditions are not bandied about for political gain? The politicians or the psychiatrists?

One would expect organizations like The Israeli Psychiatric Association, Enosh or the social workers unions to speak out against this political hate speech and explain the harm it causes the most marginalized of society.

But the psychiatrists are silent, for now.