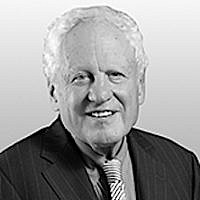 The Blogs
Alfred H. Moses
Apply for a Blog
Please note that the posts on The Blogs are contributed by third parties. The opinions, facts and any media content in them are presented solely by the authors, and neither The Times of Israel nor its partners assume any responsibility for them. Please contact us in case of abuse. In case of abuse,
Report this post.

Israel’s friends in the world are getting fed up with the UN Human Rights Council. Better late than never.

In its session last month, the Council passed five resolutions targeting Israel, which was five times more than the amount of resolutions adopted on the regimes of Iran, Syria, and North Korea. The 47-nation body completely ignored Palestinian terrorism and incitement, and likewise gave a free pass to most of the world’s worst human rights abusers, too many of whom — including China, Saudi Arabia and Venezuela — sit as council members, and enjoy immunity.

No real news for a body that over time has targeted Israel in more than half of its 135 country denunciations. In fact, Israel has been condemned by the Council more times than the rest of the world combined. We’ve seen this hypocrisy for decades from a body that dines out on targeting the Jewish state.

The good news is that Israel does not walk alone. Just last week the United Kingdom issued a warning to the Human Rights Council citing an “enduring disappointment with the Council’s bias against Israel,” later titling it “absurd.” Likewise, US Ambassador Nicky Haley, who will be addressing the Council in June, has described it as “so corrupt,” adding that the “days of Israel bashing are over.” Moreover, Israel has gained unexpected backing lately from countries like India and from new UN Secretary General Antonio Guterres.

While this support is reason to celebrate, our goal as Jews must be more than playing defense, but rather to restore the Human Rights Council to its original mission as stated in the UN Charter. This was adopted in the waning days of World War II, during the glory days for human rights. I lived through the days when Nobel Peace Laureate Rene Cassin authored the Universal Declaration of Human Rights, and Eleanor Roosevelt chaired the UN Human Rights Commission.

They and others like them, such as Mahatma Gandhi and, later, Nelson Mandela, fought for universal human rights. In more recent times the UN Human Rights Council has perverted their teaching in the name of particularism, or to use the more politically correct term, “multiculturalism,” as a way of excusing torture, arbitrary arrests, public lashings, denial of equal rights based on gender, race or religion and all the other abuses so common in the world today. Universalism, the doctrine of Cassin, Mrs. Roosevelt, Gandhi and Mandela, has been shoved aside in favor of perverted forms of particularism.

After the fall of the Berlin Wall, and the collapse of the Soviet Union, one would suppose that we would today be proclaiming the triumph of universal human rights. Sadly, this is not the case. Particularism is on the rise everywhere while universalism is pushed aside as unpatriotic or simply no longer relevant. So how have we come to this situation, and what we can do to correct it?

Remember the basics. The Four Freedoms proclaimed by US President Franklin Delano Roosevelt in 1941 — freedom of speech, freedom of worship, freedom from want, freedom from fear — are the inalienable property of the individual. They belong to each of us and cannot be particularized away.

Acknowledge both particularism and universalism. The particular is easier to champion than universalism, whether in the religious space, the patriotic, or the communal. Let’s face it — most of us derive comfort from our particularism, whether it be in celebrating our religion, nationality, family or other private aspects of our lives. It is comforting, and often more convenient, for us to rejoice in our particularism than to think about abstract notions of universalism and then put them to practice. But without protecting the four freedoms for all, none of us will be truly free.

Yes, universal human rights still matter. And it remains a primary interest for Jews to fight for universal values. After all, we are the ones who first came up with the notion of universalism; all mankind descended from one individual — Noah. Human rights, yes, but not some distorted form elevating particularity over universality.

The writer is the Chair of UN Watch, Geneva, Switzerland. A Washington, DC. lawyer, the writer has served as US Ambassador as well as Special Presidential Envoy and Special Counsel to US Presidents.

About the Author
Alfred H. Moses is the Chair of UN Watch, Geneva, Switzerland. A Washington, D.C. lawyer, the writer has served as U.S. Ambassador as well as Special Presidential Envoy and Special Counsel to U.S. Presidents.
Related Topics
Related Posts
Comments