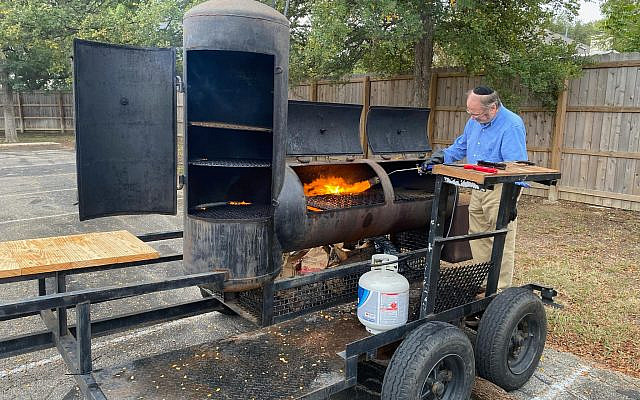 Picture one ton (that’s 2,000 pounds!) of brisket and chicken, hundreds of pounds of beans, and bushels of onions, jalapenos and assorted vegetables. Oh, and the salmon.

The Jewish community fielded five teams of dedicated “brisketeers.” The meat and food was donated by H.E.B. (the major grocer in our area), while equipment was supplied partly by our congregation, but mostly by the individual entrants.

Did I mention the event was kosher?

As the rabbi of Agudas Achim, I was responsible for the supervision of food products brought into the contest and for kashering the equipment — barbecues, smokers and unique paraphernalia used by individual contestants. For some reason, this particular responsibility was not mentioned in my interviews or job description.

What a contest it was! Texans take their barbecue seriously. Along with the cash prizes, pride and reputations were at stake.

Did I mention the event was kosher?

The Championship was held on a Sunday, but the teams began arriving the previous Wednesday. I was given two blowtorches, gloves and other “tools of the trade.” Armed and clothed, I was encouraged to “go forth and kasher!”

With a faithful helper, by Friday afternoon I finished the task. Along the way, I had to explain to the different teams that Koniak needs a “hechsher” (a kosher symbol) because it is derived from grapes, not bourbon. I made phone calls to some itinerant spice producers to see if their products were acceptable, and I watched over 100 volunteers working overtime to bring together what amounted to a mini city fair.

The main event started Saturday evening. Over 200 people gathered on the grounds of the congregation as I explained how we bid farewell to Shabbat in a Havdalah service where at least half of the participants were not Jewish.

Then the cooking began. All through the night, the crews prepared brisket, chicken, salmon and beans. By 11 am, all were ready, and over the next five hours more than 3,000 people came to sample and rate the different product booths.

Did I mention that everything was kosher?

While there were ribbons to be had and prizes to be given — everyone was a winner. The Jewish community hosted the city of San Antonio … and educated about our traditions in a program that is considered exclusively secular and non-Jewish. There is so much that is right with it, even this description does not do it justice.

Ironically, I was told that the program started because the congregation had no one to honor at its annual gala years ago. They developed a program than brings honor to all in the community.

About the Author
Rabbi Steven Bayar is Interim Rabbi at Congregation Agudas Achim in San Antonio, TX. Ordained by the Reconstructionist Rabbinical College, he is Rabbi Emeritus of Congregation B’nai Israel in Millburn, NJ, where he served the pulpit for 30 years, and teaches at the Golda Och Academy in West Orange, NJ. He is a member of the Rabbinical Assembly and Rabbis Without Borders, and has trained as a hospice chaplain, a Wise Aging facilitator, and a trainer for safe and respectful Jewish work spaces. He’s the co-author of “Teens & Trust: Building Bridges in Jewish Education,” “Rachel & Misha,” and “You Shall Teach Them Diligently to Your Children: Transmitting Jewish Values from Generation to Generation.”
Related Topics
Related Posts
Steven Bayar