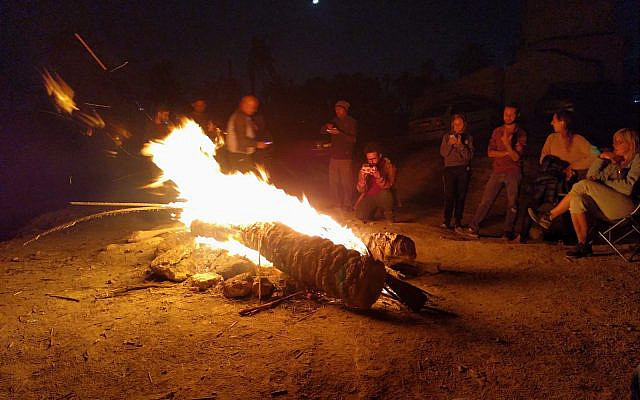 “So, if you ask me: why vote for the Pirates?” Roei looked at all of us, promoting the party he had joined in order to run for a seat in the Knesset elections this year, and thus set the tone for the next topic for our late night bonfire circle, during our camping trip last weekend.

The previous conversation had just ended with laughter at some remarks as Elianna explained what the difference is between drinking on Purim and on Pesach.

“Or maybe you should drink as much to not see the difference between the man and the woman?” exclaimed Massi who recently rediscovered his sexuality.

Discussing politics during our Aliens’ trips (with Israelis, Palestinians, and foreigners) has usually been rather a comedy show than a political debate.

“In Hebrew, it sounds better, but this is my favorite election meme so far: Jews turned from being the chosen nation to the eternally choosing nation”, said Sasha.

“Bibi won so many times that even Arabs are considering democracy,” our Indian guru Shayok continued the joke round.

“Are you seriously mocking Bibi? Your Modi has been in charge since the Spanish flu,” Sameer retaliated and continued:

“But Abu Mazen is also simply an immortal bastard while yours, guys, is more of a cat with 9 lives…”

“But, if Abu Mazen miraculously dies, I’m sure they will make an artificial intelligence and some hologram to make us believe he is always alive somewhere out there,” Mohamed added.

“Well, well, I just listened to a podcast that artificial intelligence is actually designed only for white people. So yeah, racism everywhere, sorry guys,” our German alien, Caro, inserted.

“Voting is an emotional experience and is connected to identity, and in that sense, it’s a way of expressing yourself. Meretz is the only non-Arab party that dares to mention the occupation,” said Marianna.

“Well, I did vote every time for a different party. It feels like rolling the lottery. But next year guys, we need to register the Holy Local Aliens party”, I just had to say it.

“I am for sure in favor of having the elections every year. It was the best-paid job I’ve had recently. Even though it was through the Liberman party, but these are desperate times,” Masha said.

“I am thankful to Liberman, Bennett, and Co for reminding us there can be worse than Bibi!” mentioned Zvi who spent every Saturday night for half a year on Balfour. He continued: “But Populism is stronger than demonstrations. It’s the most successful political invention, mastered by King Bibi. He is among the founders and all the others only learned from him. We might hate him but when it comes to manipulating masses, he is a hard worker and number one. Trump was too lazy for all that job…  ”

“My father called the other day; he is working at the embassy abroad. They vote in advance, so he just told me he voted for Roei’s party. I wish I could see the faces of the staff counting the votes when they see the Pirates ballot, among all the ambassadors,” Or, Roei’s girlfriend said.

Roei then gave us a small speech:

“The way politicians work — they make us desperate with the system, and they make us annoyed so that many think they don’t even want to go to vote because everything is such a circus, and don’t believe that the system can change. And then there are the others who also don’t believe it, but they just keep voting the same. And people think, that if you go into politics, that’s the system, you don’t have any other option and if you want to play this political game, you have to play by its rules. The idea of the Pirates party is to keep the platform imaginary. Even when we are so desperate with the current reality, we can still belong to the people who believe in an alternative. And even if it’s unrealistic, it doesn’t really matter. Because if being a realist means giving up to despair, it is better to keep the option of being a dreamer. Therefore, I’m voting for fantasy, for life, and for people who say they still believe that the world can be better. This is the pirate option.” 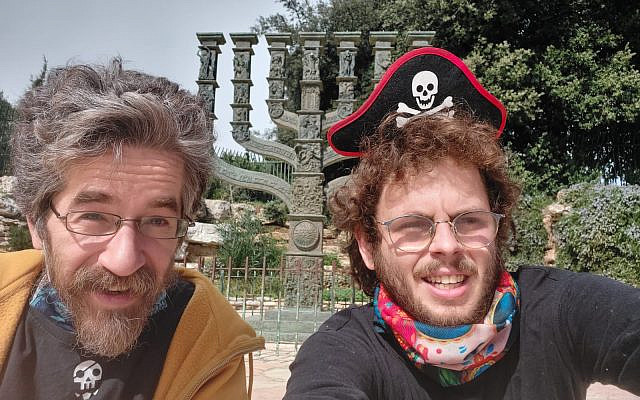 Roei convinced us all, all six Israelis. The rest expressed their moral support, but Sameer just had to add another joke: “Listen, if anyone offers to replace my green ID with a blue one, I am there for him, Bibi, Tibi, Bennett, Liberman, whoever. Voting and cheering!”

It was nearing dawn, the old dry palm trees were slowly burning off and people were soon to go back to the big cities. Israelis were waiting for the upcoming elections and Passover, and Palestinians stood by for the upcoming lockdown. Ironically, they haven’t gotten any permits for over a year to enter Israel but segers (checkpoint closures) for the Palestinians are old Israeli “minhag” (tradition) for elections day and Passover, regardless of whether it makes sense or not. Just like not eating legumes on Pesah, an old Ashkenazi tradition.

“Did you seriously vote for the Piratim?”, my boss asked me today. (Yes, we work even on elections day!)

“Don’t worry. Next year I will vote for some other party.” I replied.