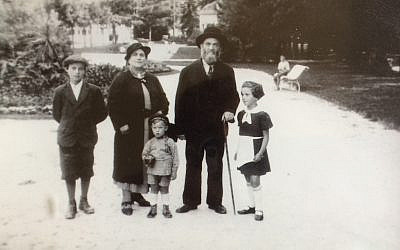 It is yom hashoah.

The date is arbitrary. Yes, I know why the authorities picked this date and the arguments about that, to which I am sensitive, and I wish it had been otherwise. But any date would have been arbitrary. The Shoah went on for years, year after year. For some, there is no yom hashoah. Every day is yom hashoah.

But, arbitrary as it is, as a society, and a people, we need one focused date.

And in a way, the arbitrariness fits, since survival, and death, as survivors say, again and again, was arbitrary. Who lived, who died, how, when, was random. Living with the knowledge, the experience, that what was of ultimate importance was decided randomly, senselessly, is one of the great traumas of the Shoah.

What is not senseless were the people who were caught up in this.

Here is the story, such as I know it, of my aunt, Dinah Grossman and her family, from Zborov, Slovakia. They were all wiped out. There is no one of them to have told this story the normal way, transmitting it among their lines. So here it is.

My aunt Dinah—she was actually my mother’s, z”l, aunt, the sister of my mother’s father, my grandfather, z”l, and my great-aunt—was, like all the members of the family, religious. Chasidic.

She was married and childless, perhaps even ten years like that. But happily married, no other issues.

But her husband went to the rebbe—which one? I do not know–about the childlessness. And the rebbe said to divorce—but immediately afterwards, to re-marry. That this would be a segula—a remedy, or charm—and would fix the problem.

Dinah’s husband came home with this idea, which she thought terrible, crazy, and she begged him not to go through with it, not to humiliate her like that.

But the rebbe had said and so it had to be.

So Dinah and her husband divorced.

Dinah married another man, forgive me, I do not have his name. And they had three children, one after the other.

This photo is of Dinah and her family, taken at the springs of Bartfeld/ Bardejov, a few kilometers from Zborov, in 1938.

Look at that proud look on her face, her whole stance, with her beautiful family. Dressed in their best.

My mother was particularly close to little Nute’leh. After she got out of the town, wrested from death by my Aunt Ida, z”l, and brought to America just before it would have become impossible to get out, she and her family corresponded. We have their letters, written in micrography, on postcards, showing signs of having passed through censorship. One is completely erased, all that comes is the address. The family corresponded until they were deported, in 1942. Auschwitz had just opened for business.

Nute’leh very much missed my mother and would go around saying, Liebe benkt sich af mir—Liebe (my mother) misses me. How do you know, they asked him. Veil ich benkt mich af ir. Because I miss her.

After all she had done, her dignity, her pride, and her triumph, Dinah and her family were taken. How could such as these have come into the orbit of such as those?

We know what happened to women with children, to the women and the children, upon arrival in Auschwitz.

So there is nothing from them, evil hands took what she had built.

Their memory is sacred.

My grandfather, Shulem, z”l, for whom I am named, was so religious he would not be photographed. So I do not know what he looked like, which I regret. But Dinah, z”l, was his sister, and I look at her face and I imagine. My grandfather was one of five brothers. A niece of his, my mother’s first cousin, Margit, z”l, survived Auschwitz. Margit looked a lot like Dinah. So, I have some sense.

My mother was the only survivor of her large family, alive only because of the fluke of Aunt Ida’s intervention. Only, while it was a fluke that my mother got out, it was not arbitrary; it  was fervently deliberate. Aunt Ida, everyone by 1938, knew that a war was coming. They could not know what kind but memories of World War I were bad enough. And she was determined to get my mother out—though the two were not related; Aunt Ida became our aunt, our endlessly beloved Aunt. She had no means to vouch that my mother would not become “a public charge,” one condition among many road blocks to Jews getting visas to the US under the Roosevelt administration. But she had a brother in Cleveland with a business and he could do it. She kept after him, he was reluctant, until he did, and the papers arrived and my mother ignored them, not wanting to leave her family, until the Nazis were already in Czechoslovakia and the border was going to close and she either left or it would be too late.

Her family told her she had to go. To help her deal with missing them, they sent her off with a large collection of family photographs, some having been taken in normal time; some they posed then, so she would have them. When she missed them, they told her, she could look at the photos. Until they were reunited.

I saw her doing that all my childhood. Something would come over her, a wave of longing, and she would pull out that pack and leaf through them, one after the other.

And so I learned about my family, I knew who was who. I got to know them. And mad as it may sound though I bet plenty know exactly what I am saying, I missed them, too.  Very much.

That is how I learned about Dinah and her family.