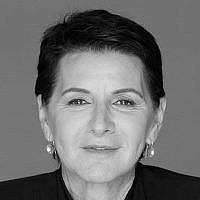 The Blogs
Gusti Yehoshua-Braverman
Apply for a Blog
Please note that the posts on The Blogs are contributed by third parties. The opinions, facts and any media content in them are presented solely by the authors, and neither The Times of Israel nor its partners assume any responsibility for them. Please contact us in case of abuse. In case of abuse,
Report this post.

I was shocked to read this morning an inciting article written by Israel Prize winner for Torah Literature for 2020, Rabbi Ya’akov Ariel

In his article, Rabbi Ariel refers to the joint panel discussion of Rabbi Delphine Horvilleur, of the Reform movement in France, alongside Rabbi Eliezer Melamed, Head of Har Bracha Yeshivah: “A joint panel discussion on religious issues with an Orthodox representative and [Reform] representatives strengthens [the Reform denomination’s] status and creates legitimacy. This has serious consequences. This encourages the continuation of the ‘quiet holocaust’, and the elimination of exile Jewry – assimilation”. If this horrific defamation is not enough, he adds allegations of a plot, in the spirit of past allegations made and voiced against Jews:  “There is serious concern for the penetration of Reform [ideology] into our home. That is the purpose of the Reform Movement, and it is naivety to think otherwise.” Using this rhetoric of intimidation is reminiscent of the propaganda of dark regimes and terrible days that have passed over the Jewish people.

This is not the first time that Rabbi Ariel has taken advantage of his position to incite against a specific population in Israel. In 2014, while serving as Ramat Gan’s Chief Rabbi, he ruled that ‘no apartment should be rented out to gay couples, for fear of committing prohibited acts under the law of Torah, and called for ‘other’ tenants to be preferred.’ In 2016, he also said members of the LGBT community are “disabled.”

The meeting between Reform and Orthodox rabbis signified the beautiful side of Judaism and the ability to love your neighbor even if they do not think like you. On the other hand, Rabbi Ariel’s blasphemous words are the expression of hatred, which Jewish history shows has fateful consequences and comes with a heavy price.

An Israel Prize winner should serve as an exemplary figure to the nation’s citizens and the future generation of leaders – Rabbi Ya’akov Ariel shows in his statements that he does not deserve this honorable title.

About the Author
Gusti Yehoshua-Braverman the Head of the Department for Diaspora Activities at the World Zionist Organization. She is a member of the WZO Executive and the Jewish Agency's Board of Governors. The former Associate Director of the Israel Movement for Reform and Progressive Judaism, Gusti has a B.A. in Social Work, a M.A. in Communications and is a certified organizational consultant.
Related Topics
Related Posts
Comments