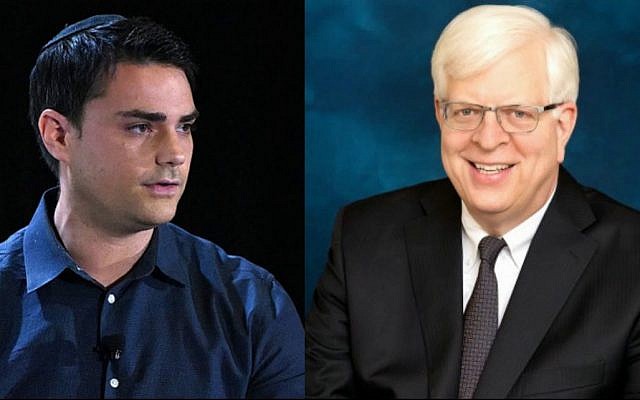 I spend a great deal of time reading or listening to people with whom I strongly disagree. In part the reason is tactical; you can’t convincingly oppose an argument without first seeking to understand it. But there is a deeper reason as well. Only God is infallible. Human beings are inherently and unavoidably flawed. None of us should be 100 percent certain of the correctness of our positions, and we should strive, at least on important matters, to come as close to certainty as our imperfect humanity permits. The best way to do that is to expose yourself to the rational arguments of those with whom you disagree.

Thanks to the wonders of YouTube, I recently listened to a one-hour dialogue between Dennis Prager and Ben Shapiro, two people with whom I almost always disagree when it comes to the political issues of the day. They are, however, among the most influential Jewish thinkers in today’s conservative media world, even though they both live and work in that bluest of blue states, California. This dialogue was by no means my first exposure to either of them, but it provides a good opportunity to reassess my disagreements with them, as well as theirs with each other.

I have followed Dennis Prager’s writings and broadcast opinions for more than four decades, and it has not been a pleasant experience. I remember him first as one of the small group of young activists who spearheaded the movement to free the Jews of the Soviet Union back in the 1970s. His 1975 book (co-authored with Rabbi Joseph Telushkin), Eight [later Nine] Questions People Ask About Judaism, is still a popular introduction to Jewish thought and practice. Gifted with a sharp mind and a powerful oratorical style, Prager, in the ’70s and ’80s, was a frequent motivational speaker at Jewish events.

But somewhere in the ensuing decades, Prager got lost. His religious views became increasingly idiosyncratic, while his politics became more dogmatically conservative. As his focus shifted toward issues outside the Jewish community, his views seemed increasingly to owe more to the right wing talk radio world than to the religious community in which he grew up. For the Prager of today, his political transformation is the meta-narrative underlying everything he does.

Ben Shapiro is a somewhat different case. A conservative wunderkind who began writing op-eds at 17, Shapiro, now 34, is the product of a different generation than Prager. His rhetoric is coarser, his style less polished. Politically, he is an extreme libertarian conservative, an ideological position he has maintained consistently for as long as he’s been in the public eye. A graduate of Harvard Law School, Shapiro has a daily podcast, is editor-in-chief of the Daily Wire, writes a nationally syndicated column, and is the author of seven books. He is also a frequent — and highly controversial — speaker on college campuses. (It is rumored that he occasionally sleeps, but I have not been able to confirm this.)

Shapiro’s foundational religious views appear to fit comfortably within the spectrum of mainstream Modern Orthodoxy. That may not be readily apparent to a casual listener because, aiming for a mass audience, he makes a conscious effort to articulate his arguments in strictly secular vocabulary. He is, however, more than capable of couching an arguments in traditional Jewish terms when necessary, as he demonstrated recently in responding to criticism by Rabbi Avraham Bronstein in an article in Haaretz entitled “Why Does Ben Shapiro Sound Like a Christian Evangelical on Abortion?” He is also noticeably careful to avoid implying his participation in any activity that would violate normative Halakha when, for example, doing live reads for advertisers on his podcast.

The dialogue that prompted this post was an interview of Prager by Shapiro on a DailyWire podcast in connection with the release of Prager’s new book, a commentary on the biblical book of Exodus, the first volume of a projected five-volume commentary on the five books of the Torah, which Prager has entitled the “Rational Bible.” (I have not read this volume, and this post is not intended to be a review of it.) It was not the first time that Prager and Shapiro have interacted on air. Their exchanges are always friendly, and in the battles of contemporary politics, they clearly see each other as allies.

In part because of the interview format, the dialogue was more revealing of Prager’s religious views than of Shapiro’s. Then again, Prager’s views leave a lot more to reveal. Shapiro’s intense intellectual curiosity and wide-ranging knowledge gives him an intellectual range unusual in the Orthodox community, or anywhere else for that matter, but his religious perspective appears to be comfortably within the bounds of Modern Orthodoxy.

Prager makes no claim to be Orthodox, or to be committed to traditional Halakha. He has described himself as a “practicing Jew” or as a “religious” Jew and has sometimes claimed to practice “Reform observance.” In his dialogue with Shapiro, as in prior writings and discussions, he claims to distinguish between biblical law, which he claims to be immutable, and rabbinic law, which is subject to change. His categorization, however, has little in common with the distinction between biblical and rabbinic law recognized by classical Jewish sources, nor even to the thinking of those sects that, in some historical periods, have rejected rabbinical law in its entirety (e.g., the Sadducees of the Second Temple period or rhe Karaites of the early Middle Ages). To Prager, it appears, any provision of Halakha that he finds inconvenient is ipso facto “rabbinic” and may be casually discarded. His is a mutant strain of cafeteria Judaism, accepting those aspects of Judaism that he likes while rejecting those that are not to his taste. His positions on religious issues appear to be purely subjective; he first decides on his conclusion and then figures out how to get there.

Prager and Shapiro are much closer when it comes to political issues though, even on those issues, there are differences. Shapiro is an ideologue, and like most ideologues, he values — maybe even overvalues — consistency. Of course, he sometimes allows partisanship to cloud his judgment (don’t we all?), but his is a principled if extreme conservatism. Prager may see himself as an ideologue, but from the outside he seems to be more of a partisan hack. He has decided that the United States is in the middle of a “civil war” — yes, he actually uses that term — and believes that all other considerations must be subordinated to achieving a conservative victory over the evil forces of the Left.

Let me be clear. I have no use for Ben Shapiro’s ideology of choice, libertarianism, which I consider to be institutionalized selfishness. Like many extreme libertarians, Shapiro equates taxation with theft and appears to see any federal government effort to help poor or middle class Americans as presumptively illegitimate. If it were up to him, we would repeal not only the Great Society programs of the 1960s (including Medicare and Medicaid), but most of the New Deal programs of the 1930s (including Social Security) as well. His desire for ideological consistency often seems untainted by any hint of pragmatism, but there is an integrity to his principled consistency, however misguided, that commands respect. Prager, though he prates frequently about the importance of “character” and “values,” is prepared to set them aside in the interests of Republican victory.

Near the end of the Prager-Shapiro dialogue. Shapiro cautiously broached the one political subject that has divided them, as it has divided so much of the country — President Donald Trump. Shapiro, who did not vote for either Trump or Clinton in 2016, but says he is likely to support Trump’s reelection in 2020, has continued to be critical of Trump’s rhetoric, while praising those actions of the Trump administration that have advanced the conservative principles he holds dear. His podcasts frequently feature “good Trump/bad Trump” lists of the president’s words and actions that he approves of and those that he disapproves of.

In their dialogue, Prager made clear that he has no patience for such distinctions because  “[t]he fate of the United States of America, the last best hope of humanity, is at risk.” He reiterated his belief that “the far left is taking over the Democratic Party” and asserted: “I am not going to spend my time criticizing the one guy who saved me from losing the country.”

Shapiro’s attitude to Trump has softened somewhat as he has celebrated what he sees as the benefits of the Trump presidency (e.,g., tax cuts, Supreme Court nominations, deregulation), but he has not hesitated to criticize the president both for his tweets and for those policies with which he disagrees, such as Trump’s ill-considered trade war. He did not, in the course of this podcast, react to Prager’s assertion that American politics is the equivalent of civil war. In a separate podcast a couple of weeks later, however, without mentioning Prager by name, Shapiro criticized the civil war analogy as both inaccurate and counterproductive. He pointed out that

[w]artime mentality encourages people to abandon morality. People are at their worst in war…. Once you believe that the country is one step away from its end, it’s pretty easy to justify doing virtually anything.

As a Democrat, it would be very easy for me to dismiss the contrast between Prager and Shapiro as a distinction without a difference. I would not, after all, want to live in in the country that either of them would create if they and their fellow conservatives get the chance. But the difference between Shapiro, who recognizes some principles higher than ideological warfare, and Prager, who makes partisan victory his highest priority, is both real and important. At first glance, their relatively small political difference seems unrelated to the differences in their religious perspectives, but I believe there is a connection. Shapiro’s Orthodoxy accustoms him to measure his views against a standard external to himself. Prager’s perspective encourages him to see himself and his own interpretations as the only standard that counts.

All the rest is commentary.