“Divine Right” is a theatrical reenactment of the 1263 Disputation of Barcelona, which pitted the Ramban (Nachmanides) against Friar Pablo Christiani, hosted by King James I of Aragon, in the king’s palace. The theatrical production’s opening night was in Jerusalem’s Khan theater in early May 2017.

On the surface of it, opening night of “Divine Right” proved to be an amazing success. The show sold out at least a week ahead of time, and every seat was filled.

The stage and scenery seemed very basic and low budget. Yet not much was needed, as far as atmosphere and feeling which the ancient cave-like Kahn theatre provided on its own. The venue was perfect for the subject and time period of this play.

The cast was superb. Even the actors with minor roles put great effort and thought into their characters and performance. It is a pleasure watching Jewish immigrants from all over, coming together to create something spectacular. 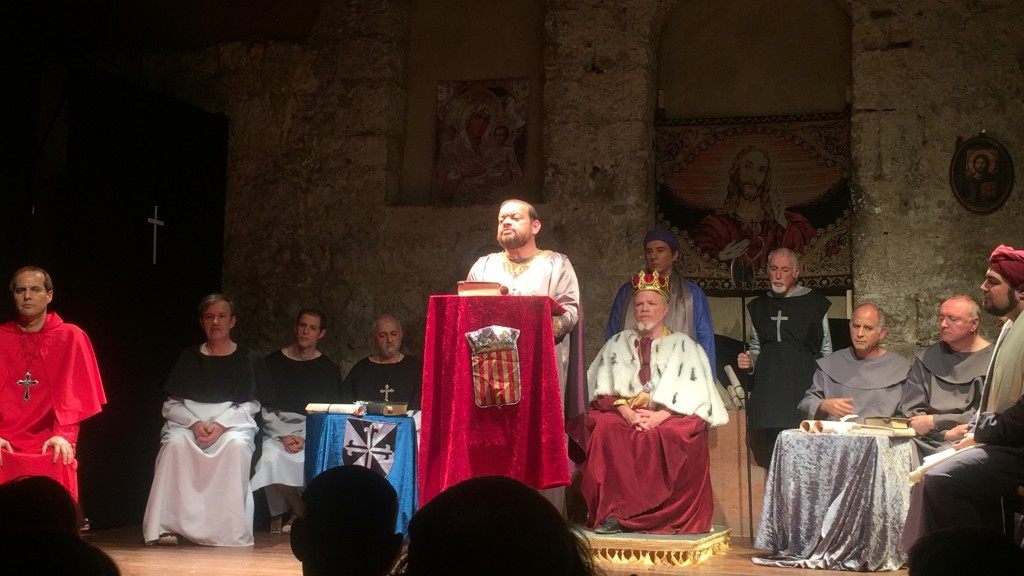 Cast of “Divine Right” on stage at Kahn Theater in Jerusalem

Perhaps the most amusing part of the evening was when there was a call for the evening Ma’ariv prayer service. All the Jewish men in the audience hurried outside the theatre to join the Jewish cast members, including the actor dressed as Nachmanides as well as those garbed as Dominican and Franciscan priests.  This pseudo “interfaith” minyan was a sight to behold, and perhaps was an ironic harbinger of what was disturbing about the play’s ultimate message.

For a theatrical drama, the play was fairly accurate in its account of the debate, including some quite shocking insults for the time that were thrown back and forth in the midst of the vollies from each side. Although the scriptural arguments presented were not those of the original disputation, the playwright did an excellent job of choosing some of the most debated passages being presented by modern day missionaries, including Isaiah 53, Daniel 9, Psalm 110, among others. Both the script and the actors did an amazing job clearly presenting the Jewish response to these passages, showing how they are taken out of context, mistranslated, or simply misunderstood.

As great as the play was, however, I did walk away unsettled and with a good amount of concern regarding the concluding message of interfaith collaboration which the playwright chose to convey. That message was given through the additional dialogue of a conflicted priest who believed the disputation accomplished nothing but hatred and death, where dialoguing and learning from each other could accomplish so much more of what his perception of Jesus’ agenda for the world was.

Granted, each audience member is viewing this play from their own perspective, experience, and personal background. As a former missionary, I viewed the play completely differently than my frum-from-birth, Orthodox Jewish husband.  As such, my husband walked away with the question: “Why do they care what we believe about Jesus, and not what a Hindu, Muslim, or any other religion believes about him?”.  It wasn’t until he recalled that Judaism is the very foundation of Christianity that things made sense.  Because Christianity bases its entire faith on the fact that Jesus is a fulfillment of the Hebrew scriptures, our Jewish insistence that he is not so and could not have been so, is a personal affront to every Christian’s faith.

The lessons I personally took from my years of studying the disputation were the intensity and deep emotions that such religious beliefs invoke, and the dangers inherent when one attempts to compromise and reduce Judaism to a religion or theology, in essence putting Judaism on par with Christianity in the name of interfaith dialogue and cooperation. The search for commonality and commensurability between Judaism and other faith communities was proscribed by great Sages such as Rabbis Samson Raphael Hirsch and Joseph B. Soloveitchik, two modern Torah giants who involved themselves in the world at large and who understood Judaism’s universal obligations to humankind. It is for this reason that they wrote about establishing very clear boundaries and guidelines for conducting discussions with other faith communities.

During the discussions after the play with the playwright Roy Doliner, he commented that he would rather have 2 billion Christians that love us, than Christians that want to kill us, therefore we should embrace the opportunity to dialogue and learn together. He also discussed that we’ve reached a time where this is in fact happening, and there are many Christians and Jews studying together. And yet if the playwright and others would open their eyes and ears, they would realize that leading evangelical leaders admit that replacement theology is alive and well, and cross-denominational antisemitism is rapidly growing within mainline Christian churches and even among evangelicals. 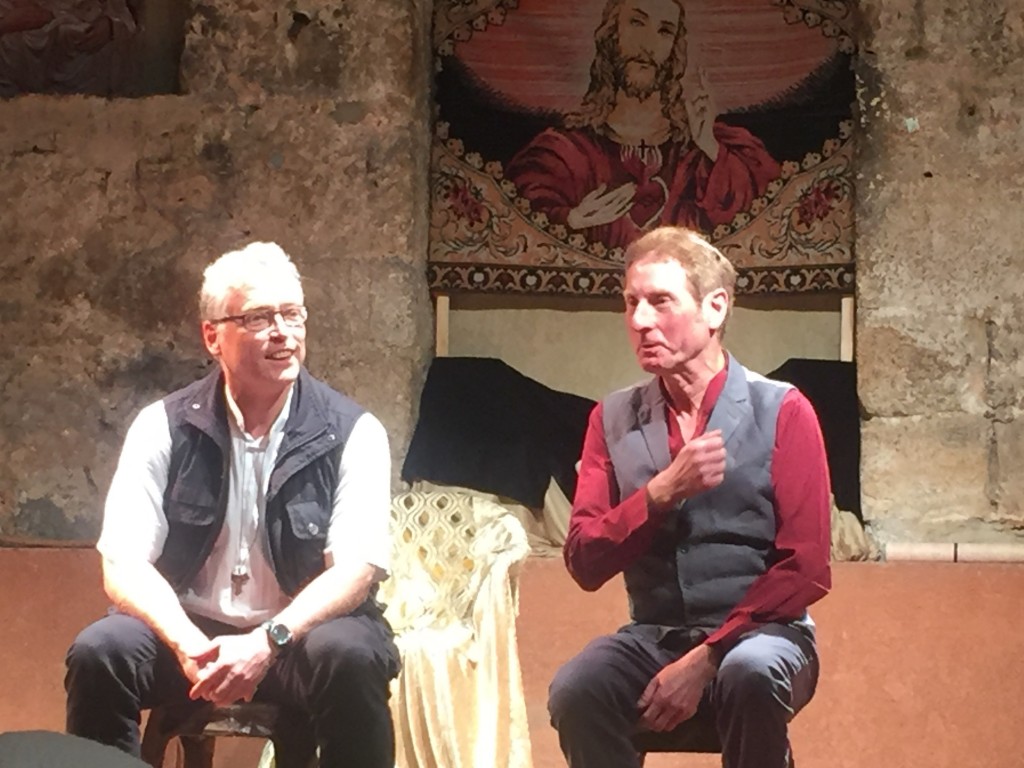 The message, that Christianity is avodah zorah (“foreign worship”) for the Jew, that it is a Torah obligation to accept death rather than to bow down or convert, was reiterated throughout the play. Yet the playwright himself said during the discussions afterwards that the Talmud does not consider Christianity avodah zorah, but “notzrim”. I strongly disagree with his statement, and he offered no source for this. The very subject of the disputation was the Christian claim of divinity which it applies to the man, Jesus.

The play ended in a great interfaith hug, which invoke great warm fuzzy feelings, but is far from reality.

Given the threat of assimilation, intermarriage, and destruction of the Jewish family life that we face today, it is important that we maintain clear boundaries between faiths that were established to safeguard the integrity of Judaism and of the Jewish soul. Within these boundaries, there is a lot of good that Christians can accomplish for the Jewish world, without treading through this “theological” mine field.  Is it worth the risk, when there are so many ways that we can benefit from a relationship that doesn’t include mingling faiths, or focusing on aspects of the other’s faith that divide us?