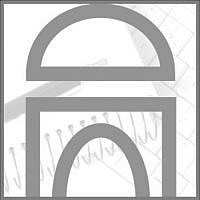 The Blogs
Mayanot Israel
Apply for a Blog
Advertisement
Please note that the posts on The Blogs are contributed by third parties. The opinions, facts and any media content in them are presented solely by the authors, and neither The Times of Israel nor its partners assume any responsibility for them. Please contact us in case of abuse. In case of abuse,
Report this post.

“They Sing Songs so That They Won’t Hear the Rockets”

Today, after 24 hours where nothing seemed to go the way it was supposed to, we were fortunate enough to have a truly unique experience. A torrential downpour , biggest in decades, in the dessert prevented us from visiting the Dead Sea as planned, so we went for a tour of Sderot instead.

Sderot, which is within a mile of the Gaza Strip, was very familiar to us, since one of the Israelis that joined our trip, Idan, was from there. We never expected to have the opportunity to visit, especially since no other Birthright group has been allowed to visit the area in the past 10 years, as rockets were raining down on the town.

When we hear about the conflict in the Middle East from the warmth of our comfortable American homes, we do not get the full picture. Sure we see the images of the damage and hurt for those injured or killed in the conflict, but we never see what life is like for those who live in fear every day. Today, we were given a clear snapshot that none of us will soon forget.

In Sderot, you must always know where the nearest bomb shelter is

because you only have fifteen seconds to find safety when you hear “Code Red.” To protect its 24,000 residents, Sderot has bomb shelters scattered throughout the city. Even the playground equipment at schools and parks double as bomb shelters.

I was fortunate to have the opportunity to not only meet, but spend a lot of time with Idan, who’s lived his whole life in Sderot. We were told that 74% of children in this city suffer from post-traumatic stress disorder

(PTSD), but when you meet Idan, you would never know that he grew up living a life of constant fear. He is one of the most kind and genuine people I’ve ever met. Despite growing up in a city that’s regularly threatened by missiles of hate, he is a true optimist who we were all lucky to meet. I will always remember and be inspired by Idan’s passion for life even in the face of adversity.

Visiting his hometown was a perfect way to close our trip. He is a true inspiration.

About the Author
The Dateline Israel blog is written by participants in "Newsroom to Newsroom," a trip sponsored by Taglit-Birthright Israel: MAYANOT and geared for practitioners and students of journalism. They'll be blogging it like they see it throughout their tour, which lasts until January 10.
Related Topics
Related Posts
Comments