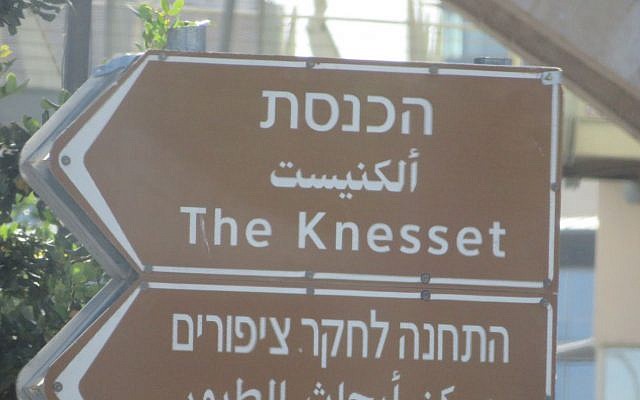 The new Basic Law “Israel as the Nation State of the Jewish People” was passed by the Israeli Knesset, and like much of what Israel does, it is controversial.

As Eugene Kontorovich wrote in the Wall Street Journal, “It has attracted a barrage of criticism from the U.S. and Europe […] Arab Knesset members ripped up copies of the bill after its passage”. But as Kontorovich added, “Israel’s Basic Law would not be out of place among the liberal democratic constitutions of Europe—which include similar provisions that have not aroused controversy”.

Many Jews, however, felt compelled to speak against the new law.

The board of deputies of British Jews said, “The lesson of Jewish history is that societies are stronger when minorities are affirmed, and they decay when minorities are degraded”, but did not explain how the Israeli minorities are “degraded” by the new Basic Law. In fact, that they are not degraded or affected negatively in any way. Recognizing Jewish rights should not be interpreted as automatically degrading non-Jews.

Some of my Israeli Jewish friends are great supporters of Israeli Arabs, and I am grateful for that. They unselfishly defend the rights of Israeli Arabs, and they promote programs that assist them economically. But the odd thing is that when there is a change that is meant to recognize Jews and their rights, such as the new Basic Law, these same Israeli Jews do not expect Israeli Arabs to unselfishly support the change; in fact, they expect them to oppose it.

I would like Jews in the diaspora and my Israeli Jewish friends to understand that Israeli Arabs do not need to be patronized and should not be patronized.

Many if not most Israeli Arabs are opposed to the very concept of Israel as the nation state of the Jewish people simply because they are anti-Zionist, and they make that fact very clear by the politicians that they elect. Many other Israeli Arabs do not care much about Zionism, and they are just grateful to live in a country that offers good economic opportunities, freedom of religion, and freedom of speech. A small minority is openly proud to live in the Jewish State because they see Jews as their brothers and sisters and are happy for them; they do not feel threatened by Jews or by their success.

None of these three groups of Israeli Arabs is affected negatively by the new law. The first group is seething mad, but only because they see the new law as contrary to their dream of transforming Israel into an Arab state. Well, too bad for them. They are already lucky that despite their hatred of the Jewish state, they have full rights as citizens of the only genuine democracy in the Middle East. They are lucky especially considering that Jews have no rights and are practically inexistent in the Arab world.

As the new Basic Law states, “The State of Israel is the national home of the Jewish people”. This reaffirms a simple and existing reality, but it affirms it in the face of never-ending attacks on that reality from Arabs and from the international community.

The new law even states, “This clause does not harm the status given to the Arabic language before this law came into effect”. It does not give Arabs anything new either, but strengthening the Jews’ status in Israel strengthens all of Israel and consequently its Arab citizens.

For Arabs who are determined to see the Jews as their enemy, the new Basic Law is indeed a loss, but those Arabs should not be anybody’s barometer of morality. They are in fact an embarrassment.