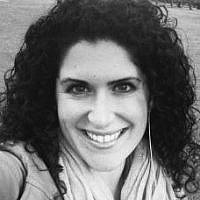 The Blogs
Raizel Druxman
Apply for a Blog
Please note that the posts on The Blogs are contributed by third parties. The opinions, facts and any media content in them are presented solely by the authors, and neither The Times of Israel nor its partners assume any responsibility for them. Please contact us in case of abuse. In case of abuse,
Report this post.

TOMORROW, Israel is having its 3rd round of elections in the past 12 months.

(No, that’s not normal. It’s supposed to happen every 4 years.)

I keep hearing things like, “Don’t vote for that party, you’re wasting your vote,”and “What’s the point of voting, nothing will change?”

I keep hearing about “strategic voting’, aka voting against the person you least like.

But let’s get this straight.

The ONLY way to effect change is to change our actions.

If we always do what we’ve always done, we’ll always get what we always got (thanks Einstein).

What we have always done is vote out of fear.

I’ve heard many people say, “I want to vote for such and such party, but they won’t get enough votes.”

So we (myself included) usually vote so that the guy we REALLY don’t like (or are afraid of), will have less chances of winning.

So then nothing changes.

What if….this may sound crazy but bear with me here.

What if we voted for the party we actually believe in.

Can you imagine how that could change our government and therefore our LIVES?

There are about 9 million Israeli citizens and about 6 million are eligible to vote.

I’m tearing up thinking about the power that WE have to use our voice and our vote to choose differently.

I personally am voting for a new party called Kol Hanashim.

Because if I vote out of fear, NOTHING will change.

But if I vote out of hope and values, something could change.

And if WE ALL vote out of hope and values, well – I think that’s called a revolution my friends.

Praying and blessing us with the courage to vote (and generally act) out of hope and new possibility and lift ourselves into a NEW paradigm.

About the Author
Raizel Druxman is a writer and a recent addition to this amazing country we call home. She landed here in January 2013 after a 5-month excursion in Southeast Asia and the Far East and is always seeking new ways to connect to people and encourage Jews of all stripes to love each other. Raised among the mountains, lakes and trees of Seattle, she is now trying to find peace in the alleys of Nachlaot.
Related Topics
Related Posts
Comments