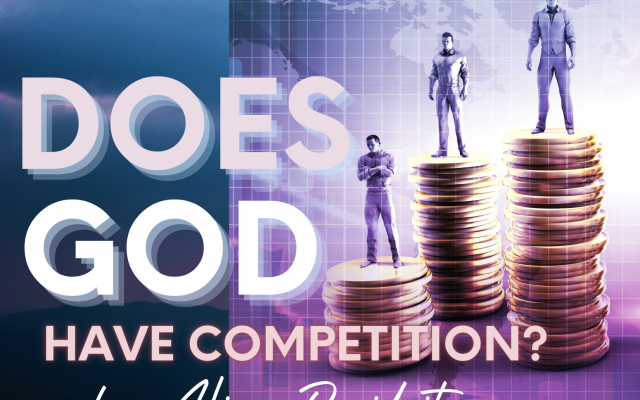 I’ll never forget the first time I saw the movie, The Ten Commandments, as a kid and how I couldn’t help but wonder how people could be so stupid as to build a golden calf and deify it. It seemed so ridiculous. I never realized until later in life that I too was an idol worshipper of sorts, albeit unintentionally.

How was I to know, having grown up in a non-religious home, that all my mother’s figurines were simply not allowed in a Jewish house? Yet, for years, they entered our home like a ceramic invasion as my mother strongly took to heart the imperative to be fruitful and multiply when it came to them.

Each expensive acquisition ushered in a new rule that further cordoned me off from showing them hospitality. They were too fragile to touch. As a little girl, I would stare for hours through the glass of my mother’s curio cabinet or get close to the non-imprisoned statues when the coast was clear. After all, I was a little girl, and they were so pretty.

I always listened to my mother, except once when she wasn’t home. There was one ceramic woman leaning against a harp. This figurine really brought out the musician in me. I plucked at the harp strings of the statue with the full force of my musical talents and with such enthusiasm that the red-haired harpist’s head fell off. My mother threw the expensive statue away instead of gluing the head back on, saying that once it was broken, it had lost all its value.

Little did I know then that the seed had been planted and that one day I’d grow up and emulate Abraham who rid his father’s store of idols by smashing all but one of them and telling his father that the surviving idol had broken the others. When Terach, Abraham’s father, questioned how a mere idol could destroy the rest, Abraham wisely replied that if they were so helpless and incapable, why would his father worship them?

The second commandment heads the list of the 365 “Thou shalt not” commandments in the Torah: “You shall have no other gods before Me. You shall not make for yourself a graven image, nor any manner of likeness….” (Exodus 20:3-4). And although most of us do not have golden calves or graven images in our living rooms, we are still not guilt free of idol worship.

Whether such objects have us bowing or wowing, we’re not allowed to have them in our homes. But I’ll be very honest; the lovely forms wowed me and held sway on my life and formed my first impressions of what a woman should look like and how she should dress. In later years I realized it was not consistent with Jewish values. Now I know better and do better. Today, I’m tasked with caring for my elderly mother and her possessions. The figurines, we jointly decided, are no longer welcome. One I smashed for my own symbolic purposes; the rest are up for sale. Not only are they forbidden but also included in the prohibition are images of the sun, the moon, or stars.

It is interesting to note that most of the idols in ancient times were shaped as humans, because what we are really worshipping through idols is
ourselves and our desires. People wanted idols to serve them and make their desires come true. In contradistinction, a servant of G-d asks G-d, “What can I do for You?” But an idolater asks what his god can do for him.

The worship of idols began in the generation after Adam. Mankind honored and worshipped the celestial creations as ambassadors and intermediaries of the On High. As time went on, people began to forget G-d altogether and just served the celestial bodies. Maimonides explains that in its origins, polytheism was not devised in opposition to monotheism, but as a flawed attempt to better serve the one G d. The rabbis teach that temptation for idols became one of the strongest temptations.

In this week’s Parashah, Eikev, Moses reminds the Israelites of G-d’s command that upon entering the new land, they must destroy the idols of the former inhabitants, lest they become ensnared by idolatry, for it is an abomination to God.

And the truth is, how many of us become trapped in life by the things we idolize? Think about some of the idols we worship today. Money, fancy lifestyles, fashion, our own arrogance, vanity, power, our image, success, our social status, politics, and social media. But know that anything that comes between G-d and us is idol worship.

Putting our faith in any conduit as the means to our salvation or “mazal” is idol worship. Yes, we may need the intervention of doctors, lawyers, or accountants, etc. But don’t think for one second that they can help unless it is God’s will. I know the best professionals in many specialties who failed miserably, leaving their clients hapless, helpless and hopeless. Don’t turn people into gods believing that they are the source of your blessings. They are just vehicles. Only God has the key to your success or failure.

Our sages also taught that someone who gets angry is like one who worships idols. For if a person believes that what happens to him is of G-d’s doing, he will not become angry.

Friends, how often do we really examine our environs and take a good look at what is decorating our lives, and whether we are surrounded by idols?

Interestingly, now that I’m trying to get rid of my mother’s decorative statues, I can hardly give them away, never mind sell them. They are simply out of style. Once upon a time they were prized possessions in society, very expensive must-haves. In our day and age, they have completely lost their value and relevance.

What a great life lesson about the things we choose to collect. The only things that have lasting value are G-d and His Torah.

So, start seeking and “smashing” all the idols in your life and start collecting mitzvahs. The returns are investment worthy. In fact, they are priceless.