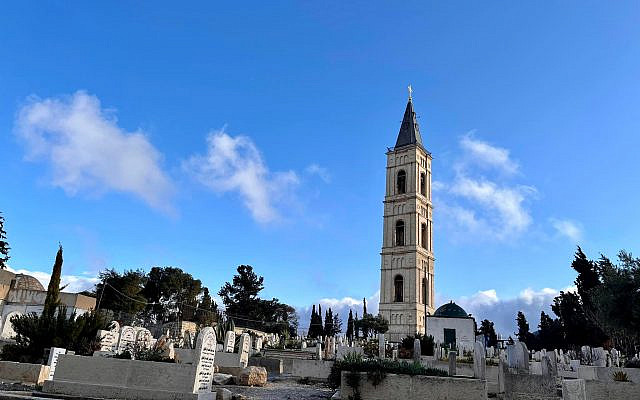 (Cemetery at the Mount of Olives courtesy of the author)

It is 3:45 a.m. and I’ve given up on counting camels or observing sensations in my body without reacting to them in my last attempts to fall asleep. Instead, I’m trying to remember whether I had coffee today after 3:00 p.m., because this is precisely why I shouldn’t.

I start remembering things. For instance, my intention for this blog was to write about all the anecdotes and funny aspects of me, Jewish girl living in an Arab neighborhood of East Jerusalem and managing a community of Israelis, Palestinians, and all kinds of other self-proclaimed aliens. Funny, right?

I was even about to write a super hilarious blog post (I swear) about the Tinder Swindler and his connection with Bulgaria and my hometown!

But then, something always has to interrupt my comedy flow and I have to draw attention to it, raise awareness, or simply write it down so I can go to bed.

On Wednesday morning, Roei called me and said, “Two of your neighbors from Atur have died just now at a construction site in Tel Aviv. How is the situation there?”

By absolute coincidence, Roei and Dvir were organizing a memorial event for the fallen construction workers at the Miffal that same night. Apparently, the tragic incident hyped the reporters’ interest towards this rather unpopular event. This led to Roei being taken by his caring friends to get a haircut so he could look media appropriate. 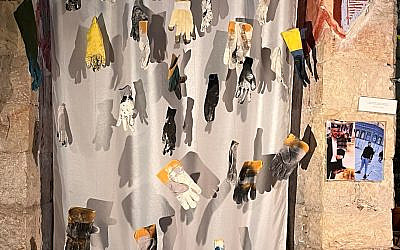 Exhibition of gloves of the fallen construction workers at the memorial event in HaMiffal, (‘Ode to the the Fallen Workmen’ by Chana Cromer)
On the side: the image of the two young men who died earlier that day (courtesy of the author)

But was it really appropriate for us, Israelis, to go to the shiva (mourning) of the two bereaved Palestinian families that lost their sons, both in their early 20s?

I asked this question to my good neighbor and friend, Wisam.

He said: “Why not, I will take you there. You know that I know everyone.”

We met Roei and Dvir at 3:45 p.m. at Wisam’s brother’s bakery at the Atur junction since it was pouring outside. His brother offered us coffee while beginning the long story of their largest family of the Mount of Olives neighborhood. But I don’t drink coffee after 3:00 p.m. and Wisam said that we were late for the mosque, and that it would be appropriate if I covered my hair.

It’s been four years since I’ve lived among hijabis and I still can’t tie my turquoise scarf the right way. Combined with my poor Arabic, this puts me to shame and reminds me how much I miss not being able to interact properly on the women’s side.

But when we arrived at the mosque, there were no women there anyway.
“The women are all crying in their homes. The men here don’t cry, they only have the sour throat feeling, as if something is stuck, you know,” Wisam said.

So I sat outside while the men were entering the mosque. A little boy came to me and offered me coffee and dates, but I only took one date. I looked through the open door at what was happening inside the mosque. 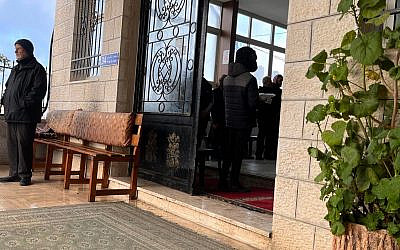 Outside the mosque (courtesy of the author)

Around 100 men were standing in a circle and the newcomers went around shaking their hands. As Roei and Dvir later told me, with each handshake, they also had to make eye contact.

“I felt from some that they truly appreciated that we came and some even said thank you for coming, but most men just seemed very sad,” Dvir summed up for me.

Wisam took us to the local cemetery where the two boys were buried last night. “Here are also buried my father, grandfather, great-grandfather, all of them. Now come to drink coffee at my house!”

I asked Wisam’s mom for maramia tea, while the boys asked questions about the funeral and the local mourning customs.

“Yes, some people were angry last night. You hear them saying, we work the hardest jobs and die to build their houses. But today everyone is just sad. You know, every man in Atur has worked in construction at least for some period of time and in every family, there’s someone who at least got injured.”

Wisam took us to show us his rooftop view, the best view from the Mount of Olives, as according to him, where you can almost touch “the candle tower” in the Russian Orthodox monastery. He shared some childhood memories with us and the three men declared on the roof where no one could hear them that all politicians were bad guys (censored) and immediate change of the situation was needed. We took a selfie as if to put a stamp on this consensus, but in reality to make my sister envious that she hadn’t joined us. 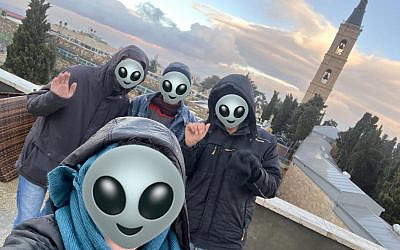 Back home, I was thinking how I want to write about our Holy Local Aliens community in my blog. I called Marianna, a friend from the Aliens telling her where I had just came from when her voice trembled as she reminded me of our many Palestinian friends who work in construction as well. She said she always worries for them and we recalled the scary stories they told us, about the lacking safety measures.

For a moment, an image of my two neighbors appeared in my mind, accompanied by that sour lump-in-my-throat sensation, the one that the men in the mosque had. But instead of observing it as an obedient vipassana disciple, I grabbed the mug next to me to swallow and tasted my sister’s cold coffee. Now I remember! It was 5:45 p.m. and I should not have drunk that coffee.