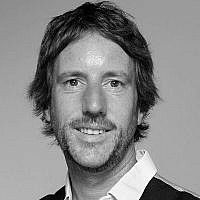 The Blogs
Andrew Hughes
Apply for a Blog
Advertisement
Please note that the posts on The Blogs are contributed by third parties. The opinions, facts and any media content in them are presented solely by the authors, and neither The Times of Israel nor its partners assume any responsibility for them. Please contact us in case of abuse. In case of abuse,
Report this post. 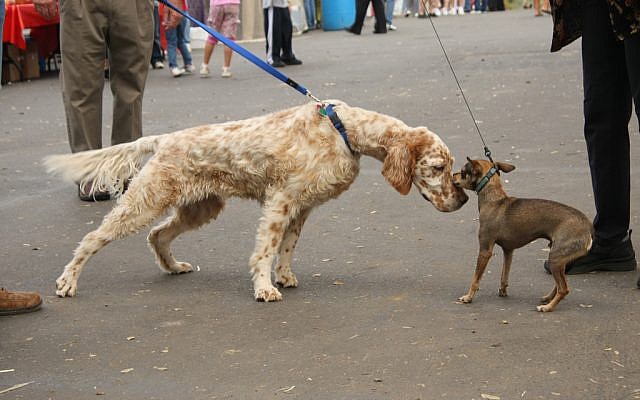 Dogs getting to know each other. (CC-BY-SA aresauburn,™ Flickr)

Don’t worry, this isn’t a blog article about the state of political discourse in Israel and across the Western world, replete with phrases like “wolf whistle populism” and “pack instincts,” or at least not exactly. Nor am I about to launch into a diatribe about how some dog owners don’t pick up their dogs mess or complain, “That dog is playing too rough with my dog.”

I want to share my experience of a place where politics is discussed in a gentler way, and where people coming from all sides of the political spectrum take an extra moment to withhold judgement, and listen with a little more sincerity. That place, for me, is the dog park. The dog park next to the Carmelit Bus Station in Tel Aviv to be precise.

I’ve spent a good deal of time trying to understand what is it about the dog park that gives us humans the chance to be a little more “human” to one another. I guess, as dog owners, we’re all there for the same reason and looking for the same outcome, a chance for our dogs to exercise and enjoy playtime with their friends. We share a common interest, a love of dogs, and, similar to a smoking break at work, we’re only there for a finite amount of time with no additional agenda.

The dog park attracts a genuine cross section of society. Ages range from 18 to 80, a fairly even gender split and no doubt a broad range of socio-economic statuses. And, as I have found, an equally broad range of political opinions. I first noticed it during the Tel Aviv mayoral elections that people in the park would discuss the various merits of each candidate, share anecdotes about them, share ideas on policy and generally discuss the issues important to them. It’s hard to imagine striking up a similar conversation with a stranger on the bus.

What really caught my attention was that people actually listened to one another. There were far fewer derisive comments and assumptions based on if someone was more left or right leaning politically. With politics in Israel often appearing so tribal, so “with us or against us,” it was immensely refreshing to witness genuine debate. Arguments being backed up, counter arguments being considered.

I’ve concluded that having our lovely dogs around us no doubt helps us to feel relaxed when we discuss matters which might otherwise raise our blood pressure slightly. And, that being in the same location for the same reason provides space to agree, disagree and debate all from a place of honest respect. We’re all going to see each other again tomorrow.

Now I’m not imagining some dog park utopia where everything is peace, love, dogs and unicorns. But wouldn’t it be nice, with the Israeli national elections coming up soon, if the discourse and debate surrounding them could slightly mirror the political discourse of the dog park. A more gentle and respectful discussion often brings out better solutions. Woof woof.

About the Author
Andrew Hughes is a UX Writer. He moved to Israel in 2005. He lives in Tel Aviv with his dog Ozzie and has a 15 year old daughter.
Related Topics
Related Posts
Comments