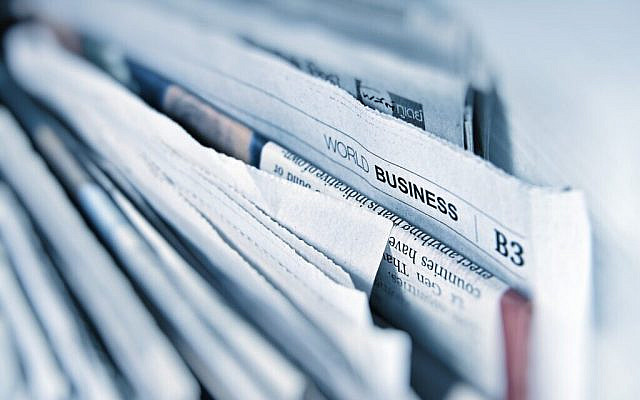 Newspaper (Photo by AbsolutVision on Unsplash via Jewish News)
Now give me your opinion on this hypothetical situation. A thousand members of the supporters association of the dirtiest football club in the league are asked whether their players need help. Seventy per cent of them say there is no problem. So do you believe the supporters?
No, of course, you don’t. They are hardly likely to say mea culpa and put on sackcloth and ashes. You will expect them to support the club through thick and thin.
Yet when You Gov announce that 70% of Labour party members deny that the party has a serious antisemitism problem, everybody believes that they think that is the gospel truth.
You then have to ask whether there is a better yardstick than enquiring whether you have stopped beating your wife. Fortunately there is. In the last general election the Labour party polled fewer votes than in any year since 1935. That is the incontrovertible opinion of the British electorate. A lot of Labour party supporters proved conclusively that they did not approve of antisemitism.
What other questionable results are suggested by this You Gov enquiry? Well, we are told that 29% think Jeremy Corybyn would so a better job than Keir Starmer. It is not pointed out to us that 71% don’t think so. That’s a landslide in Keir Starmer’s favour.
We are also told that 72% of Labour members don’t want Jeremy Corbyn expelled from the party. Surely that’s primarily because they’re Socialists and his Socialist beliefs resonate with them. Labour is a Socialist party; is anybody suggesting that it’s main objective is to work for an antisemitic manifesto?
Are workers rights, Trade Union legislation, minimum wages, benefits, pensions and the National Health Service all unimportant compared to being unpleasant to the Jews? Alright, if they don’t denounce antisemitism whenever it raises its ugly head, a lot of people  aren’t going to vote for them, but it can’t be top of the agenda.
It is often impossibly difficult to drag out the truth from a mass of misinformation. This isn’t a modern phenomenon; unpleasant heads of government have used propaganda to persuade their citizens of falsehoods since Alfred was supposed to have burned the cakes. A useful accusation if you want to eliminate a Ready Steady Cook contestant.
The latest example is the interview that dreadful American woman gave. She lied when she said that she had been married before the official wedding by the Archbishop of Canterbury. Undoubtedly you can do a great deal of damage with an interview of that kind, but the one thing that will wreck your efforts is telling one lie.
Every salesman knows that. Tell one lie and everything else you say is discounted as unproven and probably false. The real problem with the interview from our point of view, however, is that every tinpot dictator will try to take the spotlight off their own shortcomings by trying to point instead to racism in the royal family. How can you be racist when half the Commonwealth is coloured? It’s like President Putin standing for Cheltenham.
Of course the Americans, trying to deal with an attack on the Capitol, are also trying to shift the spotlight onto our alleged errors. We haven’t, in fact,  burnt the White House since 1814 but they shouldn’t have attacked York in Canada in the first place.
Antisemitism has affected Conservative elections as well. When Daniel Lipson was the proposed  candidate for Cheltenham in 1937, he was rejected because he was a Jew. So he stood as an independent Conservative and beat the official nominee. His nephew is Lord Winston.
About the Author
Derek is an author & former editor of the Jewish Year Book
Related Topics
Related Posts
Comments