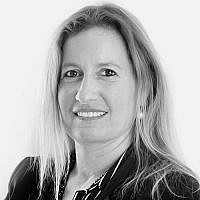 The Blogs
Avital Leibovich
Apply for a Blog
Advertisement
Please note that the posts on The Blogs are contributed by third parties. The opinions, facts and any media content in them are presented solely by the authors, and neither The Times of Israel nor its partners assume any responsibility for them. Please contact us in case of abuse. In case of abuse,
Report this post.

Misleading headlines in the international media is nothing new.

In April 2002, the IDF led an operation in the Jenin Refugee Camp on the West Bank. The false Palestinian narrative claimed that Israel killed hundreds and even thousands of innocent Palestinians. The international media soon picked up that narrative with dramatic headlines and use of the word “massacre.” BBC World, for example, published a story on April 18, 2002, titled Jenin “massacre evidence growing.” The scam was discovered a few days later, and the so-called thousands of casualties turned to be 52. The effect of the lie, though, lingered for a long time.

But familiar as I am with media misrepresentation, recent coverage of the violent riots on the Gaza border has left me speechless.

An NPR article dated May 14, 1:17 pm ET, states that “tens of thousands of Palestinians protested the embassy opening” – which is completely inaccurate. The Palestinians have been rioting at the Gaza border since late March, demanding to be allowed to “return” to what they refer to as their homeland. They even named these riots “March of Return” and used this as a hashtag in social media. Why would a respected media outlet like NPR describe the riots as motivated by the embassy issue, a connotation the Palestinians did not use?!

El Pais was guilty of the same error, publishing an article on May 15, 08:15 CET, describing the violent riots as a simple “march” that took place “against the transfer of the US embassy to Jerusalem.“ Again – there is no connection between the two events, but it surely helps create a more interesting story. The hell with the facts….

Here is another problematic quote from the NPR article: “more than 1200 were hurt in gunfire.” There is not even the slightest description of the situation on the ground. If I had landed from another planet and read this NPR story, I would surely get the impression that these are peaceful people who were killed for no reason. And one more thing: Hamas isn’t even mentioned in the story. Not once. As if it had nothing to do with these riots. As if Hamas didn’t invest millions of dollars in this extremely violent campaign (instead of using the money for the benefit of its own people in Gaza).

In the El Pais story, Hamas is mentioned, but only to be quoted as commenting on the future of the Palestinian protests. There is no mention of its significant involvement in organizing the riots, or of the armed individuals Hamas sent to terrorize. In other words, there is no context, and so readers are misled to believe a reality 180° different than the reality on ground.

Finally – there is no doubt of the great power of a picture.

But pictures can be used to mislead, showing certain angles and hiding others to promote a specific agenda. Thus BuzzFeed ran a “photo show,” published May 14 at 7:00pm. The photo editor chose exactly 12 pictures: six portrayed the violence in Gaza and the other six showed the ceremony at the opening of the U.S. embassy in Jerusalem.

But the positioning of the photos was carried out intentionally to embarrass Israel and create sympathy for the Palestinians. For example, on the second page, the top picture is captioned, “a Palestinian carries an injured protester during clashes,” while the bottom photo shows Ivanka Trump smiling as she unveils the new embassy plaque.

To be sure, I, too, was saddened to hear of the civilian casualties in Gaza. But the fact remains that few international media outlets described the violence that took place at the fence or even mentioned that a sovereign country may defend itself. In a chaotic Middle East, the media should aim to do more than produce headlines that “sell.” Such headlines can be dangerous tools in the hands of the terrorists while missing out on the original goal of a journalist – to objectively inform the public of newsworthy events.

LTC (Res.) Avital Leibovich is the director of AJC Jerusalem, and former IDF Spokesperson to the International Media

About the Author
LTC (Res.) Avital Leibovich is the director of AJC Jerusalem, and former IDF Spokesperson to the International Media.
Related Topics
Related Posts
Comments