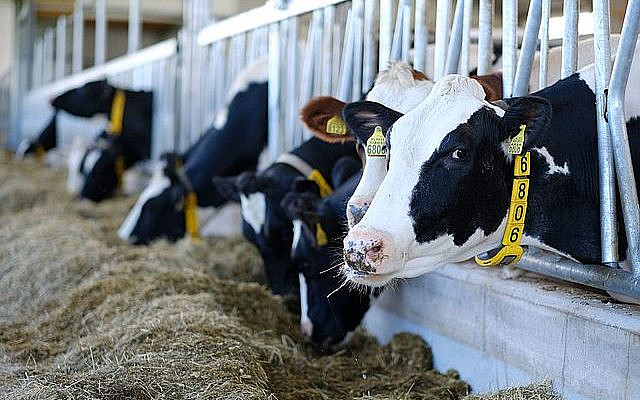 One of the things I love most about Judaism and Jewish practice is how they have been shaped and influenced both by both divinely mandated ancient laws as well as human-created traditions throughout Jewish history.

Judaism is a dance between what God told us we have to do and what we have voluntarily chosen to do, either in the form of protective laws or colorful ritual enhancements.

The upcoming holiday of Shavuot is no exception and is, in fact, one of the greatest examples of how Jewish creative involvement has shaped Jewish practice above and beyond what is written in the Torah.

For starters, while Shavuot is widely recognized as the holiday that commemorates the giving of the Torah thousands of years ago on Mt. Sinai, there is absolutely no mention in the Torah itself about a connection between this day and that event.

Instead, the Torah refers to Shavuot as the “holiday of first fruits” since it was a time when Jews living in Israel in ancient times brought the first fruits to appear on their trees to the Temple in Jerusalem and gave them as gifts to the kohanim (priests) working there.

In the absence of the Temple, this practice is no longer an obligation and therefore no longer performed.

The Torah also refers to Shavuot as the “holiday of weeks” (“Shavuot” means “weeks”) since it is the culmination of the Torah-mandated counting of seven weeks beginning on the second day of Passover.

Nonetheless, Shavuot has primarily become equated with the giving of the Torah. But unlike eating matzah on Passover, shaking the lulav on Sukkot or blowing the shofar on Rosh Hashanah, there’s no unique Torah-based defining ritual for Shavuot.

What does come to define Shavuot as a unique holiday in a post-Temple reality, and not just another day of rest like Shabbat, came from the Jews themselves and is two-fold.

First, the tradition of staying up all night studying Torah until dawn.

Studying Torah all night obviously makes sense, but what does eating cheesecake have to do with celebrating the giving of the Torah?

There are multiple reasons given for the custom of eating cheesecake and other dairy products on Shavuot, but what I want to focus on here is this: it’s a custom. It’s not a law from the Torah. It’s not an obligation. After 120 years in this world, when you go to Heaven you won’t be asked, “Did you eat cheesecake on Shavuot??”

But the custom is very prevalent, so much so that in Israel (where I live) dairy companies spend tons of money on marketing campaigns in the weeks leading up to Shavuot, encouraging shoppers to include their products in their celebration of what literally has become known here as the “holiday of dairy”.

They buy all kinds of cheeses and spreads to be used for blintzes and pastries and, yes, cheesecake.

And while, as I said above, I love and have great respect for the role of human intervention and innovation in Jewish tradition, I think this specific custom is absolutely wrong.

First of all, let me share that, if it wasn’t already obvious, I’m vegan and have been for 26 years.

And even after taking dairy products out of my diet, it took me many years to truly understand the horrors of the modern dairy industry.

I originally stopped eating dairy products because of the cramped and cruel living conditions animals were forced to live in. Only years later did I discover that it is far worse than just that.

Most people don’t think about this, but cows don’t just make milk automatically. Like other mammals, they produce milk upon giving birth as food for their newborn calf.

But if you have ever visited a dairy factory farm, you won’t see bulls walking around impregnating the cows.

So how, you may be wondering, do the cows become pregnant?

Good question. One that you probably don’t want to hear the answer to, but I’m going to tell you anyway.

There is a person, or people, on each dairy factory farm whose job it is to artificially inseminate female cows. They do this by inserting their arm deep into the cow and then, using what they call an “AI gun”, they insert semen into the cow.

A little over 9 months later, a calf is born and the cow’s body is now producing milk.

But that’s just the beginning.

Though, like human mothers, a cow has a natural and immediate affection for her calf along with a deep desire to nurse and care for it, cows in the modern dairy industry are not permitted to express and enjoy this most natural of instincts and inclinations.

Immediately their calf is taken from them, never to be seen again and never to be cared for.

If the calf is female, into the dairy industry she is placed and raised.

If male, he is shipped off to be raised for veal (to be killed just a few months later) or killed right away, depending on need and convenience.

And the mother? She will live, as she did before, kept in a crowded and dirty pen, filled with urine and feces, allowed to leave three times a day when she is taken to have her milk taken from her. This milk her body produced for her newborn will instead be bottled, shipped off and sold in supermarkets, bought by shoppers to use in their coffee and cereal, or made into dairy products of all kinds.

This process will be repeated four or five times over in the lifetime of the cow until her milk production wanes and, no longer of benefit to the dairy industry, she is sent to be slaughtered for her meat.

So why do I think eating cheesecake on Shavuot is wrong?

First of all, because of these horrors I think it’s wrong to eat any day of the year, but especially on Shavuot when the Jewish people are celebrating the day they received the Torah, an event that gave birth to the existence of the Jewish people.

The word “Torah” comes from the Hebrew word for “instruction” since the Torah is an instruction manual, a guide, to help us become the greatest versions of ourselves and to create a world that is most aligned with the Jewish values of love, compassion, mercy and justice.

With that in mind does it make sense to celebrate Shavuot by eating cheesecake made from milk that a cow was forced to create by being forced to get pregnant, that milk forcibly extracted from her after her newborn calf was forcibly taken away forever?

That’s how we want to celebrate being Jewish by preparing and eating foods that have cruelty behind every bite?

That’s how we want to celebrate receiving the Torah, a mandate from God to improve ourselves while fixing the brokenness of our world, by supporting and perpetuating a system that disregards the value and quality of life of God’s creatures?

My thoughts and beliefs around this issue are inspired by the following teaching of the late Rabbi Avraham Yithack HaKohen Kook, the first Chief Rabbi of pre-state Israel, who wrote the following:

“Humanity will come to acknowledge the principle of the existence of the milk of the mother, who does not live so that people, simply by their right of ownership, can exploit the milk for their own purposes, but rather so that she can suckle her tender young, the kid which is dear to her, with her milk.

The kid, by virtue of its character and its nature, is also entitled to the love of its mother’s milk. But the cruelty in the human heart, which emerges from physical and moral weakness, changes and distorts these principled views. Thus the tender kid, according to the evaluation of humanity’s lower morality, is entitled neither to nestle against its loving mother, nor to enjoy the wonder of life, but only to be slaughtered and to be food for the stomach of gluttonous humanity, for its debased soul which says, “I will eat meat” (Deuteronomy 12:20).

You will know, when the time comes, that the life of the animal was not created in order to satisfy your lustful appetite, and that the milk was principally intended to be nourishment for the one whom nature conceived to fulfill its role, just as the milk of your mother’s breasts was vouchsafed for you when you were nursing.”

This Shavuot, may we envision this future world already happening today by leaving the dairy behind and planning meals that bring health to ourselves and the world instead, with no pain and suffering, physical or emotional, to any of God’s creatures.