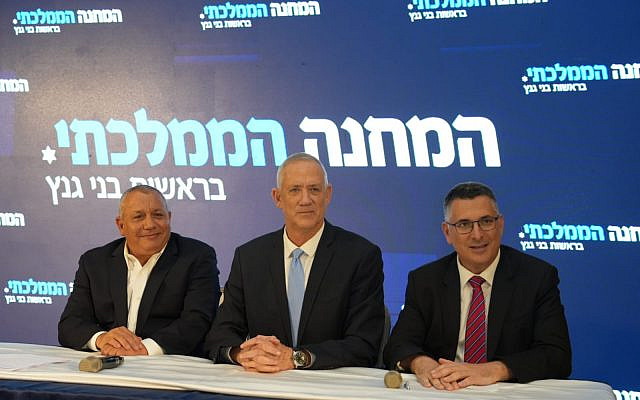 Elections in Israel are brutal affairs — never more so than the present round. The discourse is beyond toxic, the atmosphere is confrontational in the extreme, and the political maneuvering is as bewildering as it is distasteful. The rivalry between the two major blocs — perpetuated by participants and commentators alike — is now being countered by a call for “a broad national unity government without the extremes” (as if Arab society in Israel is the mirror image of the Jewish fascists of the far right). The debate between those who continue the binary battle between the blocs and those who advocate for a cross-cutting coalition is now emerging as the central axis of the election campaigning.

This is a misleading and dangerous development. It offers more of the same under different guises. It cannot begin to resolve Israel’s mounting problems. It freezes social divisions without providing a real panacea for the troubled state of Israeli society. It deflects attention from the vital, albeit exceedingly painful, need to make hard decisions. A brief examination of how the campaign is shaping up, past experiences with diverse narrow and broad governments, and possible alternatives is in order.

Elections in Israel, as elsewhere, have always provided the most salient public platform for the power play between diverse groups, interests, ideologies, and worldviews. This particularly combative round is no exception. Despite the broad array of opinions and parties, the division of the country into two large blocs, representing the so-called right and religious on the one hand and the center-left on the other, has ossified since 2015. It has been propelled by Benjamin Netanyahu and his adherents, sustained by his opponents under the slogan of “Just not Bibi,” and simplistically promoted in the media. The four rounds of elections between 2019 and 2021 yielded a continuous stalemate. There is no reason to assume (especially in light of recent polls) that this equation can be altered in the fifth iteration on November 1, 2022.

This impasse has spurted the call for a national unity government (excluding the “margins”), spearheaded by the merger of Benny Gantz’s Blue and White party and Gideon Sa’ar’s New Hope — with the intriguing addition of former Chief of Staff Gadi Eizenkot — into the Hamahane Hamamlachti (in Hebrew, the Statist Party; in English, translated by its founders as the National Unity Party). Its goal of establishing a wide coalition between the major political lists and increasing their centrality in Israel’s political firmament is gathering momentum, as the prospects for a clear-cut outcome between the blocs diminishes. For Netanyahu, this option may serve his personal need to extricate himself from his ongoing trial on charges of corruption and breach of trust. Politically, it offers him both the possibility and the legitimacy to return to power. For Gantz and his allies it may the only way to rise to the top. And for the parties of much of the center-left (especially Yair Lapid), it constitutes a fallback, in case they fall short of an outright victory at the polls.

The strongest card in the appeal of proponents of such an arrangement to the electorate is fear — bordering on revulsion — of yet a sixth round of elections. Less obvious is the opportunity for revenge (against the far-right, against the left, against Arabs, against anti-Netanyahu breakaways such as Avigdor Liberman). What is offered in return is the promise of stability, order, policy coherence, and national unity. In truth, however, these assurances ring hollow. Like the palpably confrontational blocs, advocates of this concept of national unity are championing the continuation of a narrow notion of political domination devoid of Jewish racists and the bulk of Israel’s Palestinian-Arab community at the expense of the construction of a shared Israeli society that has room for all its many different components. In the process, they make a mockery of democratic confrontation and proffer little hope for any significant change.

Israel’s record with national unity governments is uneven at best. The first such construct was almost forced on Levi Eshkol on the eve of the Six Day War, breaking a 29-year string of Mapai-led coalitions. The inclusion of Menachem Begin’s Herut was critical at the time. It also provided the previously excluded Revisionists with the stamp of legitimacy that paved the way for their shake-up of the Israeli power structure in 1977. During the 1980s, the Labor-Likud standoff led to the creation of two national unity governments (1984-1988 and 1988-1990). These coalitions scored important gains in reconstructing a flailing economy, but did little to nurture inter-group tolerance or to enable any progress on the important Israeli-Palestinian front.

This century has witnessed several broad (although not explicitly unity) coalitions. This was the case for most of the Sharon period, to some extent for the Olmert tenure, and, in one form or another, for the first two governments of the Netanyahu era (2009-2013; 2013-2015). After that, Netanyahu cultivated the bloc mentality (the Netanyahu-Gantz formation created to deal with the national crisis was a sham).

The Bennett-Lapid coalition in office since last summer, ostensibly a change government but incorporating immense socio-political diversity, is a microcosm of the severe limitations inherent in these formations. It, like most of its predecessors, sowed social discord, rather than solidarity. It chipped away at citizens’ faith in government and boosted simmering alienation from the public sphere. It proved incapable of dealing effectively with the fundamental issues of inter-group enmity, rising violence, socioeconomic inequities — let alone the basic question of Israeli-Palestinian relations both within and beyond the Green Line. And it failed to adhere to any moral compass or guiding value system. There is no cause to infer that a reconstructed national unity entity would fare any better on any of these counts.

Beneath the veneer of unity and beyond the obvious divisions at the root of the intersecting national, ethnic, religious, class, and geographic polarization in the country and its accompanying enmity, there are too many disparate approaches to pressing policy questions — ranging from the economy, education, climate change, and personal security to the justice system, the rule of law, and the ways to most effectively grapple with regional threats in an increasingly inimical world.

To be sure, narrow governments have not always performed any better, creating a host of other problems. Ben-Gurion’s fight for statism (the source of the much-heralded mamlachtiut now touted as an answer to the country’s ills) was exclusionary ideologically (without Herut or the Israel Communist party — Maki), inequitable socially (at the expense of Arabs and Mizrahi Jews), and demonstratively centralized and illiberal politically. The Labor-Likud rivalry that came to a head in the 1990s, with constant rotations between these two major agglomerations, proved to be more path-breaking and openly liberal than its predecessors. But it also cemented the divide between these camps that has impeded both potential fluidity and serious change, dooming the country to ongoing cycles of domestic confrontation and progressive disarray. This pattern has become especially salient in recent years, becoming the norm in the country today.

The upshot is fascinating, as well as superficially disheartening. The ways the national unity governments and political blocs have evolved in Israel are two sides of the same tarnished coin that allowed successive governments to avoid doing what is their public brief: making decisions that promote the interests of their citizenry in all its heterogeneity. Without such an avowed sense of responsibility, their authority — and hence their capacities — have dwindled.

There is a different path. One which acknowledges the built-in diversity of Israeli society, recognizes the justness of claims of exclusion and inequality on all sides, and seeks to develop points of convergence around a new vision of an embracing and tolerant Israel committed to giving a voice, a place, and a share in the power structure to all its citizens. Such efforts are now being carried out on the local level and in a series of civil society efforts. If these are to have any lasting impact, they must be given a political voice on the formal as well as the informal level in order to present a promising alternative to the prevailing dead end.

The multiplicity and variety of slates do offer many choices to even the most befuddled or alienated voters. And each individual still has the capacity to make a difference by opting for that list which most closely aligns with his or her beliefs and aspirations. That, in this very uncertain and troubled environment, is what democracy is all about. Don’t be blindsided by the false illusion of a national unity which defies any hope for societal cohesion. Take what may be this last opportunity to make elections here truly meaningful.