The Blogs
Melanie Takefman
Apply for a Blog
Please note that the posts on The Blogs are contributed by third parties. The opinions, facts and any media content in them are presented solely by the authors, and neither The Times of Israel nor its partners assume any responsibility for them. Please contact us in case of abuse. In case of abuse,
Report this post.

I love this time of year. The country is festive, bedecked with flags. Despite our plentiful problems, Independence Day somehow brings out the best in people.

This year, like every year, my family and I hung a flag on our balcony for the whole city to see. We bought a miniature version to perch on the window of our car.

Yet, recently, something has put a damper on my flag.

The iconic blue-and-white has become an emblem for the nationalist right wing. I’m referring to the ideological bloc that controls the government and the one that, in my opinion, is ruining this great country.

Go to any right-wing demonstration, and you’ll encounter a sea of Magen Davids and stripes cloaking the hordes. The flag has been appropriated to justify Israel’s 50-year-old occupation of another people, the expulsion of refugees, blatant racism against its own citizens, and anti-democratic legislation.

Nowhere was this more acute than at demonstrations during the summer of 2014, when Israel was at war with Hamas. Flag-clad bullies harassed and in some cases physically attacked protesters like me who called for a diplomatic solution.

The strategy behind this branding campaign is to point out the true patriots. It’s as if to say the ones carrying the flag truly care about Israel; because they’re holding the official symbol, theirs is the correct – and only – way to love this country.

We all have the right to wave our flag in any context we wish. No one, not even the prime minister, can claim exclusivity to it. We Israelis, of all persuasions and backgrounds, should not let anyone dictate to us how to be a patriot, or how to wave our flag.

Abroad, something similar is taking place, but from a very different direction. Go to any so-called left-wing demonstration or browse social media, and you’ll likely find the Israeli flag pitted against the Palestinian one.

The Palestinian flag appears to represent justice and liberation, while its Israeli counterpart irrevocably represents oppression, evil, even apartheid and colonialism.

As a result, many people, including Israelis and Diaspora Jews, may believe that the Israeli flag, and by extension Israel, actually embody these traits. As a consequence of a very different branding campaign, the flag arouses shame and loathing among people who would otherwise find common cause with Israel.

Because visual language is so powerful in our digital age, the flag is easily linked to buzzwords, extremes, and the detrimental rhetoric and actions of our current leadership.

As much as I oppose our government and state of affairs now, I refuse to give up on my flag –or on Israel.

Just like Israel’s existence is not inherently bad or oppressive, neither is our flag. I insist on distinguishing between policy and the State itself, and more importantly, between transient politics and Israel’s potential.

The Middle East is a dynamic place. Things change quickly here. Once the region’s leaders realize that we can do more together than against each other, Israel will be the best place in the world. After that, we’ll still have a lot of work to do, but the same passion that has wrought this land into conflict will build it into something greater than the sum of its parts.

I refuse to buy into attempts to hijack the flag. Instead, I have decided to play by my own rules. This Yom Haatzmaut, I will wave my flag for hope. I will wave it for the struggle to make Israel what it can be.

About the Author
Born in Canada and living in Israel since 2003, Melanie Takefman writes about life in Israel, herstory and cross-cultural identity. She is currently working on a book about women and migration.
Related Topics
Related Posts
Comments 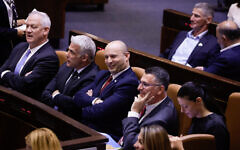