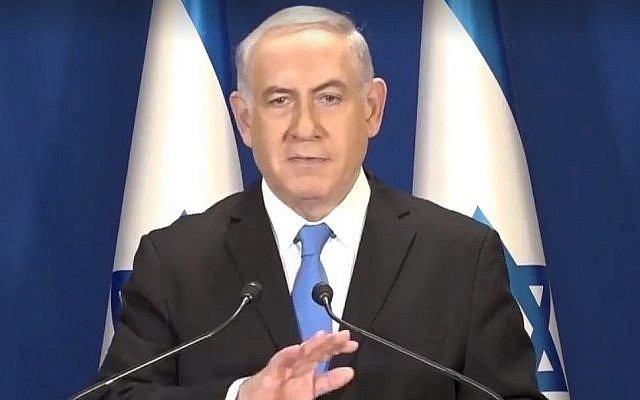 Prime Minister Benjamin Netanyahu reacts to the Israel's Police recommendation he be indicted for bribery in a pair of criminal investigations on February 13, 2018. (Screen capture: Facebook)

Israelis are preparing for the 2019 elections (either in March, May or latest in November) as if the results are a foregone conclusion. Pundits and participants alike, relying on a series of polls amplified by the media, are already declaring that the prime minister and the Likud will emerge as victors — aided and abetted by a weak, fragmented and fractious opposition. They would have voters believe that, barring any unforeseen circumstances, the forthcoming polls are but a ritualistic precursor necessary to ushering in yet another Netanyahu term in office. They are in all likelihood mistaken; but by misleading themselves and the public, they are fueling a dangerous defeatism that may turn into a self-fulfilling prophecy if not identified and directly challenged now.

The current conventional wisdom rests on several shaky assumptions, the most obvious being that the police recommendations to bring charges against Netanyahu for bribery, fraud and breach of trust will not ripen into full indictments in the near future (and if they do, they will not affect the outcome of the elections). This presumption is buttressed by repeated poll results that show that the Likud under Netanyahu continues to be the largest party in the country. They suggest that potential rivals for the office of prime minister cannot alone garner enough support to even begin to endanger his hegemony (to assure this outcome against possible challenges from within, the increasingly fragile coalition is bent on passing the so-called “Gideon Sa’ar Bill” that would compel the president to give the task of forming the next coalition only to the leader of the party with the greatest prospect of establishing a viable government). It has thus become much too easy to ignore the fact that there is broad dissatisfaction with Netanyahu even within his own circles and that the difference between a right-wing victory and defeat in the next elections is, at best, a mere handful of seats in the Knesset (the present 61-59 split in the Knesset is indicative of the paper-thin margin between coalition and opposition that exists today).

Nevertheless, observers insist that no significant change at the ballot box is possible, pointing to the disarray in the ranks of the opposition to the center and the left of the political spectrum. Lacking a common substantive agenda (other than ousting the present government and its leader), they argue that the rising number of old and new parties at odds with the present coalition lack a credible figure who can replace the current incumbent. This claim is, in many respects, both specious and untested: nobody has had an opportunity in the past decade — either on the right, center or left — to pose a serious challenge to Mr. Netanyahu. Clearly, at some point, like all democratic leaders, he will be replaced. The only question, as all even marginally politically conscious people are well aware, is when and by whom.

The response to the overriding sense of disorder is nevertheless difficult to address, especially since it is fueled at every turn not only by government spokespeople and outlets, but also by the incessant squabbling within the opposition. The evidence is indeed substantial: Avi Gabbay of the Zionist Union is confronted with several mutinies from within (including threats of organized splits in his already severely divided party); Yair Lapid’s Yesh Atid has provided a default haven for centrists, although he himself has been unable to soar in the polls; the search for alternatives (focusing at this time on Benny Gantz, Gaby Ashkenazi, Tzipi Livni and even Ehud Barak) continues apace. With all these battles of thinly-differentiated perspectives and overly-inflated egos, it is hardly surprising that many of those keen on bringing about a significant transformation in Israel’s political landscape are succumbing to despondency.

Despair is a very poor incentive to political action. It works to strengthen those in office and, by nurturing a fear of change, not only entrenches a precarious status quo, but also weakens attempts to introduce alternatives. This does not have to be. With just a little effort and goodwill, certain measures can be taken both to alter the prevailing mindset and to enhance the prospects for change.

At this time, proactive steps have proceeded along two interlocking directions. The first revolves around attempts to form a center-left electoral bloc that would embrace the array of parties now in the opposition. The widest such construct — and the least probable — would be all-inclusive. But given the hesitations among most Zionist parties to a coalition with the Joint Arab list, concrete talks are focusing on the construction of such a bloc amongst all — or most — predominantly Jewish parties in the opposition. The second — and clearly allied — move involves coalescing around a leading candidate who could give Binyamin Netanyahu a run for his money at the polls. Given the immense egos involved (only thinly disguised behind a seemingly substantive cloak), the likelihood of the fruition of such moves is highly questionable.

What is not in doubt, however, is the very real political potential of an electoral alliance (as distinct from an electoral bloc) that can mount a significant challenge to the present power structure in the country. Such an alliance would be based on explicit agreements between the diverse political forces currently working to oust the religious-right-wing government that has held sway in the country since 2009. This loosely organized alliance would maintain the autonomy of each of its components (which would stand for election independently), while agreeing a priori to cooperate in three major ways.

First, the members of the alliance will adhere to a “non-belligerency” pact internally, vowing not to criticize each other during the course of the campaign while at the same time granting the constitutive factions a free hand to challenge the present government as they see fit. This arrangement would focus the campaign on the record of the present coalition versus its alternatives without reducing the patent heterogeneity of the latter into any artificial or ephemeral vise of uniformity.

Second, all the participants in the alliance will cooperate during the election period — and especially on election day itself — to assure a free and fair plebiscite. This collaboration is especially important during the counting of the ballots and the tallying of the results (if the municipal elections are anything to go by, such pooling of resources could assure broad oversight at all the polling stations, thus preventing charges of electoral manipulation).

Third — and in the eyes of many most importantly — the alliance will be predicated on the understanding that the leader of the constituent party with the largest number of votes will become its candidate to form the incoming coalition and will receive the backing of all its cohorts (which will then juggle amongst themselves for key portfolios). Such an understanding would dramatically reduce the personalization of the political campaign and leave more space for a healthy debate over policy alternatives.

An electoral pact possesses some notable advantages. It minimizes the in-fighting that plagues the opposition while simultaneously enhancing its strength vis-à-vis the current coalition (the broader and more inclusive the alliance, the greater its influence on the outcome). It also focuses the campaign on some long-neglected issues and favors substantive discussion between all the parties and viewpoints competing in the elections. And, by magnifying the sense of voter efficacy, it overrides the prevailing sense of electoral futility and invites greater citizen participation — by any measure a boost to substantive democracy.

Given the host of imponderables that proliferate in Israeli politics (including not only timing and circumstances, but also moods, attitudes and personalities), election results are increasingly unpredictable. These can be swayed only if contestants are led to believe that they cannot make a difference or if they are consumed by such pride that they are willing to lose all rather than compromise.

If, however, today’s challengers are truly invested in their vision and the necessity of a meaningful change in direction, they can decide to overcome their defeatism by joining forces and stepping up to the task. They can begin to act like winners and take the few modest steps needed to make the next elections a true choice between alternatives. If they don’t, they will be complicit in contributing to the democratic, social, economic, security and international backsliding of Israel in the years ahead.