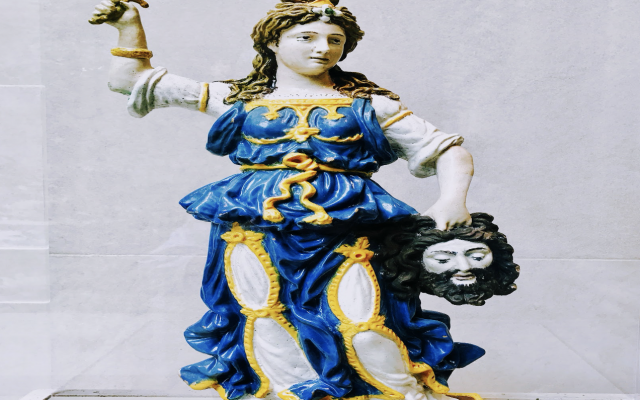 Woman are notorious in the Bible for taking men’s heads—and I mean taking them!

I assume the photo above is Judith who according to the Apocrypha decapitated General Holofernes as he encamped around and planned to attack a Judean city.

Similarly, in the book of Judges, Yael kills Canaanite General Sisera by driving a stake through his temple upon his fleeing the battle with the Israelites led by Barak and the prophetess, Deborah.

In the book of Esther, the evil Haman (a decent of Amalek) and his 10 sons are hung from the gallows after he falls on Queen Esther bed upon her informing King Ahasuerus of Haman’s plot to kill her and all the Jews of the Persian Empire.

Of course, Delilah cut off Samson’s Nazarite hair thereby taking away his super strength from G-d and allowing the Philistines to capture him, gouge out his eyes and eventually ending in Samson’s death when he brought down the pillars of their temple collapsing it all on the Philistine enemies.

The great news is that women are awesome fighters, the bad news is that your head is a very valuable thing to lose.  😉