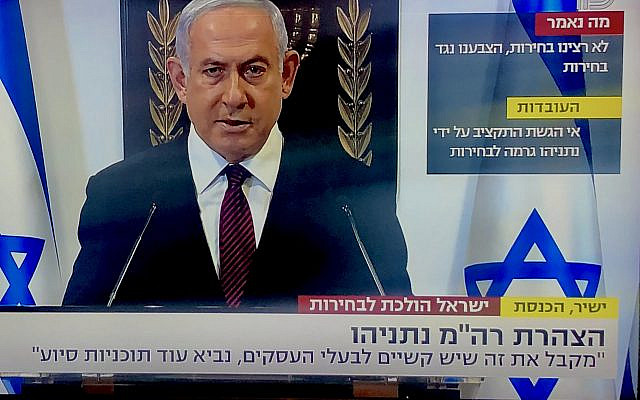 Economical with the truth (Ch 13 screengrab)

Now that elections are imminent again, I have a recommendation for the experienced but mistake-prone voters of Israel: support the candidate you actually want, not whoever you think will win. Preferring the latter illogically is one of the unspoken scourges of our time.

Many Israelis both underthink and overthink their vote, which is a problem given the electoral frequency: the coming March 23 balloting will be the fourth in under two years. Straight thinking and a bit of luck might yield a less catastrophic result.

Let us examine the dysfunction.

Underthinking comes attached to people who vote automatically for a certain party without considering the consequences.

In theory, this happens on all sides, but it’s an epidemic on the right: masses of its voters do not want a binational state or creeping theocracy but cannot be moved without a nuclear weapon. They see themselves as akin to fans of a football team: always loyal, even if management are fools and players cannot find the ball.

I’ve heard them admitting Likud harms their interests, yet the rampant underthinking prevents this epiphany from achieving an effect. There are explanations: in a country under siege populist nationalism works; the cultural war between haves and have-nots; and so forth, dismally.

This is mainly why Likud and its proxy Shas poll about 30 percent still despite Benjamin Netanyahu’s refusal to pass a 2020 budget, freezing spending at 2018 levels during a pandemic – but enabling him to avoid the promised prime minister rotation with “unity government” partner and erstwhile rival Benny Gantz on technicalities.  It was a dirty trick that projected bad faith and sown economic wreckage, but none of it matters to the underthinker.

Overthinking, meanwhile, is tactical voting gone wild, and we are in danger of seeing a lot of it in this fourth election.

Historically, tactical voting tended to move voters to different parties within a bloc.

This is how people whose heart is with leftist Meretz voted for centrist Blue and White, a party which ended up betraying them by joining Netanyahu. They voted this way to create large party balancing Likud. Party size doesn’t have much meaning in Israel’s electoral system where only the blocs matter – but there is the nagging sense it can affect the fuzzier metrics, like political momentum and public legitimacy.  Blue and White caved despite winning the last election due to weakness and miscalculation, which is why it is currently vanishing in the polls. Tactical voting can yield such a result.

Tactical voting also caused some centrists to vote for Meretz, a party which they might have considered too naïve about Palestinian intentions and too socialist. They supported it to prevent its falling below the electoral threshold, wasting center-left votes and killing any chances for Gantz.

This latter case makes some sense, and it is also the reason some right-wingers who are not extremists may have voted for small parties of the far right.

Ahead of the coming election, though, polls predict a wild form of tactical voting that is unnecessary and unwise: the support, evident in a Channel 12 poll published as the government collapsed, of former center-left voters for either Naftali Bennet and his Yamina Party, or Likud rebel Gideon Sa’ar and his nascent New Hope party.

In the March 2020 election, parties opposed to Netanyahu won 62 of 120 Knesset seats. That anti-Netanyahu majority has not emigrated or died off. Yet about 15 seats have flipped to Saar and earlier to Bennet, according to all polls of the past weeks.

One can hope that those polls, which have high numbers of non-respondents, are premature, and that when things on the center-left become more clear they will look different. But if not, then there are there would be two ways to view the situation:

Both might be true. Israel might get rid of the dubious Netanyahu and at the same time end up with a squeaky clean and totally insane government determined to enlarge the suicidal settlement project in the West Bank. That is especially true if Likud responds to its loss by dumping Netanyahu; Sa’ar would reunite with them in a split second and even expect leftist support for vanquishing their villain.

Is this good enough?  Why would even a single center-left voter actively support Sa’ar over a committed liberal, secularist and pragmatist like Yair Lapid, who defaults now to the standard bearer of the center-left?

I blame failures of the intellect and spirit.

So voters would do well to keep their eye on the ball: Sa’ar will be useful toward bringing down Netanyahu even without the support of leftists. It is enough that he takes votes away from Likud and makes good on his promise to not rejoin Netanyahu. Let him join Lapid and help achieve his stated goal of removing a corrupt prime minister. If the wavering Bennet sticks to a similar, that’s also useful. No more would Israel’s first-ever criminal defendant of a sitting prime minister  machinate dismissal of prosecutors and cancellation of his trial.

Gantz’s unwise decision to join Netanyahu because of the Covid emergency argument is no reason to deprive the center-left of the majority it should have deployed without mercy earlier this year.

Just vote for the candidate who actually represents your world view, let mathematics do the rest.

To not prefer Sa’ar yet vote for him anyway is a case of underthinking and overthinking at one and the same time. It is a breakdown of the logic of democracy. And it would serve as another indictment of suffrage when too many already consider humanity unequal to the task.