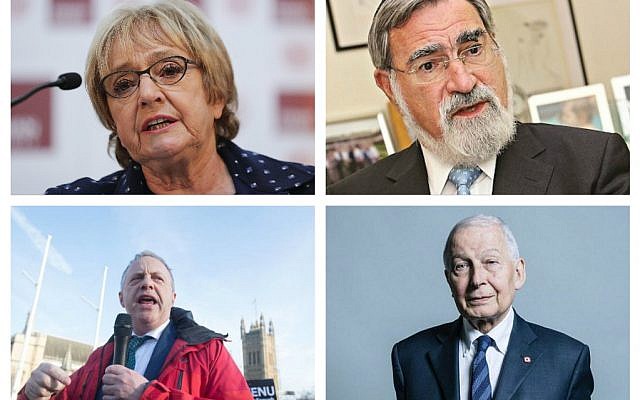 The row over anti-Semitism is not going to be solved with hysteria or hyperbole, but by evidence, of which there is plenty.

If the community continues to resort to scare tactics and false arguments that can be easily deconstructed, it’s going to be an uphill and never-ending struggle.

In recent weeks, it’s been frustrating to watch one politician and public figure after another reach for the ridiculous.

It’s not effective, infact, it sets back the case.

Dame Margaret Hodge got the ball rolling, saying Labour’s probe over her calling Corbyn ‘an anti-Semite’, made her feel like “a Jew in Germany in the 30s”.

Comparing Labour to the Nazis is not helpful. It distorts history and the present, and it simply sounds irrational. While her concerns over anti-Semitism have legitimacy, they should have been expressed much better, and more accurately.

Next, the president of the Board of Deputies went onto Israeli TV, and said: “It’s like Jeremy Corbyn has declared war on the Jews at home”.

Not only over-the-top, but intended to pour fuel on the fire.

It’s exactly this ‘us-and-them’ language which emboldens the very stand-off the community is supposedly seeking to end.

Then, former Chief Rabbi Lord Sacks, an intellectual heavyweight and usually a cool head, branded Corbyn’s remarks about Zionists not being able to ‘understand English irony’, as “the most offensive statement made by a senior British politician since Enoch Powell’s 1968 ‘Rivers of Blood’ speech.”

Now, I’m no Corbynista. Infact, I’m a huge fan of Rabbi Sacks. I’ve tried to read many of his books, before being drowned with his intellectual sophistication.

But his comments lost him gravitas.

It’s plainly not true. Corbyn’s remarks were idiotic and arguably racist, but weren’t said to deliberately  foment widespread hate, like Powell’s. Few had even heard them until last week. It’s not like he went onto the BBC, and claimed that the ‘Zionist was going to have the whip hand over the Englishman’.

Then, Frank Field, an MP facing deselection locally after 40 years of rebellion and for backing for Brexit, resigned the whip, saying Labour had become “a force for anti-Semitism in British politics”. It’s hard to believe it’s the real reason he jumped, because he was in a precarious position anyway. And, it’s not as if this row just began. Why now?

The final chapter in this series of hysteria came this week, when John Mann said that Jewish Labour MPs should be  ‘automatically reselected‘ at the next election. This is most unhelpful. No MP should be in a job due to their faith. It just paints a picture of giving special treatment, and it’s a ridiculous suggestion.

So, let’s take a step back.

We can do better than this.

The problem in Labour is two fold:  One, that anti-Semitism exists, and two, that those in power in the party, refuse to recognise it properly, or act on it.

The solution is not to worsen the first problem, by making crass and overblown comparisons, which strengthen the second problem.

There is plenty of evidence regarding Labour anti-Semitism to call out those who are guilty, legitimately.

And especially with regard to previous comments and associations of Jeremy Corbyn, he must be held to account. The rot comes from the top.

But it’s exactly the fantasy politics being used; with false arguments comparing this situation to the worst things in history, which make it harder to tackle.

There is a catalogue of evidence to hold up, but first the debate needs to be simmered down.

Whether that evidence is the various comments and associations in Jeremy Corbyn’s past, or the countless instances of unresolved cases of hate, and much more, it can be tackled through facts.

The overblown comparisons must end, and the community must call out Labour anti-Semitism as it sees it.