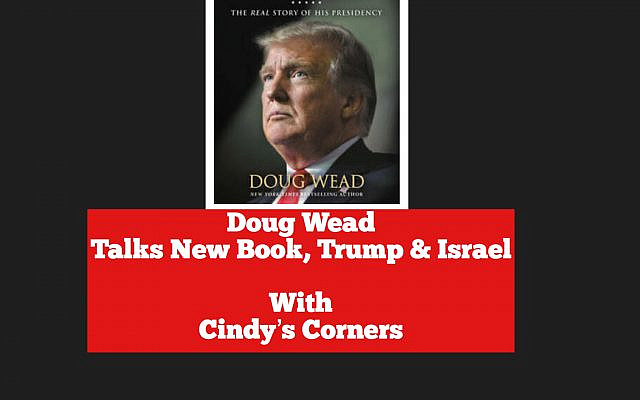 Doug Wead is the author of Inside Trump’s White House: The Real Story of His Presidency.

It could not have been better time to interview him. I had just returned from The White House Hanukkah Party, multiple events sponsored by coalitions supporting President Trump and viewed, like many of you, a week of hearings ending with a House vote for impeachment. Democrats have a goal of not doing anything more than changing the words of America’s forefathers and costing legal taxpayers, many of them Jews, millions of dollars.

Doug Wead has been involved in government since the 1970s and has known presidents and has written best-selling books about them. He even is credited for coining the phrase “compassionate conservative” about former President George H.W. Bush. Wead ran for the U. S. Congress from Arizona in the 1990s.

Now, after dozens of books and articles by anonymous sources, here is finally a history of the Trump White House with the President and his staff talking openly, on the record.

In Inside Trump’s White House, Doug Wead offers a sweeping, eloquent history of President Donald J. Trump’s first years in office, covering everything from election night to the news of today. The book will include never-before-reported stories and scoops, including how President Trump turned around the American economy, how he “never complains and never explains,” and how his actions sometimes lead to misunderstandings with the media and the public. It also includes exclusive interviews with the Trump family about the Mueller report, and narrates their reactions when the report was finally released.

We discussed his relationship with The Trump Family. Wead told me he still speaks with a few family members occasionally. One just called him to find out how the book is selling.

“We are witnessing a new kind of history, We are witnessing attacks and impeachment from the Democrats because they are in trouble. They can’t decide on a candidate or a platform. They have no brand. They switch word phrases like constitution and G-d, judges and term limits to fit their needs for “speaking points.””

The only message that exists consistently is hate.

The Trump Family is everything but hate, they are genuine. They speak, but also listen. They believe in what they do.

So who is their target, President Donald J. Trump. They hate him, and they hate anyone who voted for him. That won’t change. Neither will the support for President Trump.

Ivanka shared with Wead a philosophy all the Trump family members live by— “I refuse to be better, I choose to be great.” What a great motto!!

Doug Wead spent a lot of time discussing with various Trump members the accomplishments of the administration during the Trump presidency so far. Jared Jushner discussed how the President found out that the previous five presidents, from both parties, promised to move the Embassy to Jerusalem. The ultimate goal for all of them was peace in the Middle East. Then, leaders from around the world, including Presidents Macron and Erdogan told them thatif they moved the Embassy from Tel Aviv, tens of thousands would die in a massive war. President Trump weighed in and thought, previous presidents achieved no peace and no Embassy move. As we now see, President Trump was right. And, he threw the Palestinians off balance. Trump has been able to do much more for Israel and maintain a reliable ally in the Middle East.

Wead also learned how Tiffany was raised with both the Evangelical Christian and Jewish backgrounds. One the first night of the presidency, a Friday night, Ivanka lit Shabbas candles in The Lincoln Bedroom.

Wead believes that years from now, historians will look back at President Trump and his tenure filled with great accomplishments. Schools will teach President Donald J. Trump as a great President.

Doug Wead is a New York Times bestselling author and former adviser to two American Presidents. He served as special assistant to the president in the George H.W. Bush White House. Mr. Wead’s books are known for their primary sources. He has interviewed six American presidents, seven first ladies, 19 presidential children and twelve presidential siblings. In 1970 he co-founded the Charity Awards and was a part of the founding of Mercy Corps which has distributed $2 billion of food and medicine around the world.