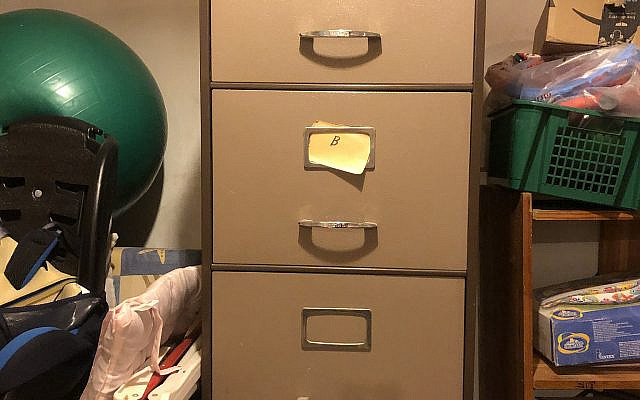 When one of my two sisters asked me to try and find a document about our father, who died 20 years ago, I remembered the filing cabinet. Twenty years ago, it took my sisters and me many months to sort through his possessions and dispose of them. His metal filing cabinet, containing dozens of files and papers of various kinds, ended up in the basement of my house, and has remained there virtually untouched ever since.

Our father was reluctant to part with any document or letter that ever reached him, and there were many of those. As I went through the heavy metal drawers the world of my parents re-emerged beneath my fingers. There was a big brown envelope containing the many lovely birthday cards and wishes my father had received for his 60th birthday (he lived to be 87). There were bank statements from England, where he spent most of his adult life, as well as from Israel, where he retired when he turned 65.

There were folders of documents and correspondence relating to the various stages in his life, first in Germany, where he was born in 1916 and whence he fled in 1938, then in England (1939 to 1984) and finally in Israel. Three countries, three languages, and more information than I could possibly cope with on my own.

It was then that I came across the folder of correspondence and documents he had assiduously assembled concerning my own wedding, 55 years ago. Suddenly, it all came back to me. I had been living in Israel for a couple of years. My parents were still in England. All our communication was by means of letters. My future husband and I met and decided to get married rather more quickly than was customary in England at that time. However, my parents bravely congratulated us and took their prospective son-in-law to their bosom.

Because my family had relatives in Israel with whom I was in frequent contact, I took my fiancé (though we had no official engagement) to meet them and informed them of our forthcoming marriage. Almost to a man (and woman), they expressed delight, welcomed my prospective husband and speedily brought out something with which to drink ‘lechayim’ to celebrate the occasion. I reported all this joyfully in my weekly letter home.

But it seems that all was not peace and harmony in the wider family at hearing my news. The letters I sent my parents at the time tell the story. “On Shabbat afternoon we went to tell the (relatives who shall remain nameless — D.S.). To my surprise, when I told them that we were getting married they were struck dumb, with nothing but sheer horror written on their faces. They could not even pretend to be pleased or raise a smile between them.”

I wish you could have heard me laughing when I read these words down in the basement the other day. I had completely forgotten about all the family drama at the time of the wedding.

It’s all water under the bridge now. Our relations with our relations were eventually mended, and the river of life continued to flow and take us all wherever we were destined to go. But I’m glad I managed to take a trip down the time tunnel and see how young, innocent and vulnerable I once was.