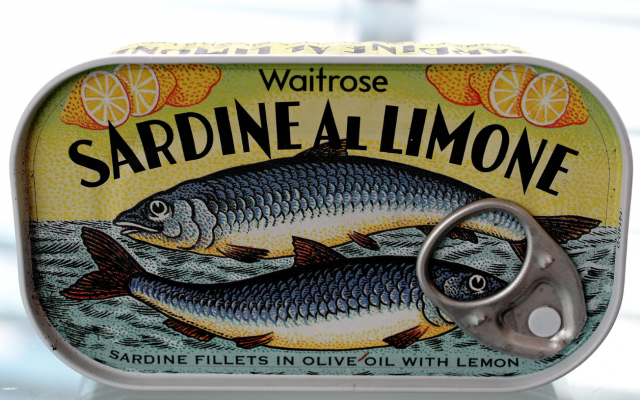 Down With Sardines. I have this emblazoned in large letters on a piece of cardboard that I carry as I stroll through the deserted streets. Everyone is in lock-down, but I had read the fine print; demonstrations are allowed. So, I am part of a very small demonstration, a one-man demonstration, that allows me to wander unhindered by police or army.

Yesterday, I went out with an old dog lead. When I was stopped by a not-too-friendly policeman I explained that the dog had managed to escape. He was not impressed; you can only walk with the dog by your side, go home, now. But nobody can argue with a demonstrator, and many people dislike sardines.

Of course, I could have dressed in black and claimed to be Haredi, they seem to be exempt from all the rules. But I had no time to grow a beard and some rabbi, sitting in comfort in Brooklyn, could come to his senses and change his mind at any moment.

This is not the first time we have been invaded by a foreign enemy. From the year 70 CE when Jerusalem was captured, and its Temple destroyed by the Roman army to Great Britain’s invasion and occupation in the days when we Jews were the Palestinians, numerous invaders have come and gone.

Not all invaders have been human. Just a year ago, Israel was invaded by parakeets. There are now over 10,000 ring-necked parakeets and monk parakeets in Israel. Brought in as pets, some were released by owners who had lost interest, and some managed to escape from their cages. This created a huge free population. These invading birds cause severe damage to crops like sunflowers and nuts and compete with native species. Another recent arrival from southeast Asia is the common myna. The myna sometimes nests in traffic lights and eats the eggs and chicks of rival species.

But all these invaders could be seen. The Romans soldiers knew nothing of camouflage and wore colored cloaks and fancy plumes on their helmets. They could be seen from miles away and would intimidate their enemies long before they arrived.

The British soldiers wore bright red caps, the colour of kalaniyot (anemones). A song by Nathan Alterman, Kalaniyot, about a little girl who dreams she is gathering anemones in a basket for her mother, was used to alert Lehi and Etzel fighters to the presence of British soldiers.

The parakeets and myna birds make no attempt to hide themselves, their bright plumage a pleasant sight for us non-farmers.

But our latest invader is invisible. Our economy, even our lives, are under attack from a silent, invisible enemy, the coronavirus. Together, we stood against the Romans, the British and flocks of alien birds. Together, we drew strength and prevailed. But now, we are told that we must stay apart. We must self-isolate. We cannot hold our grandchildren; we cannot shake our neighbour’s hand. This is a totally new experience for all of us. But we will prevail.