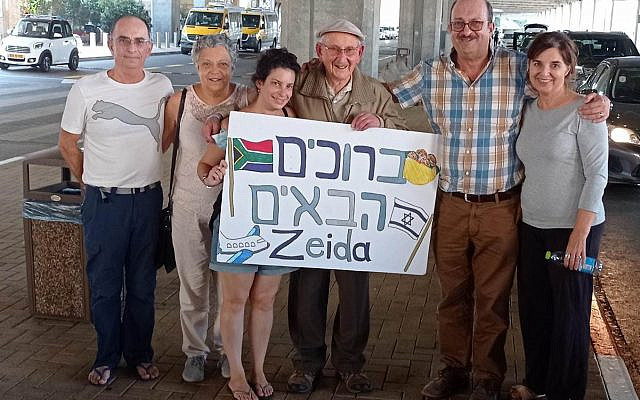 Hymie is greeted upon arrival by the family. (courtesy)

The phrase, “it is never too late,” has been used ad infinitum in many contexts. Yet we all know that sometimes it is in fact too late. One of the greatest of all the spin-off phrases is, to my mind, Waldo Emerson’s, “You cannot do a kindness too soon, for you never know how soon it will be too late.”

Yet there are some people who seize the day late in life, way beyond what normally would be the expiry date on certain experiences. One of the outstanding recent examples that comes to mind is 82 year-old aviator Wally Funk who finally got her moment in space as part of the Jeff Bezos program having missed out 60 years earlier because NASA was not selecting female trainees as astronauts. 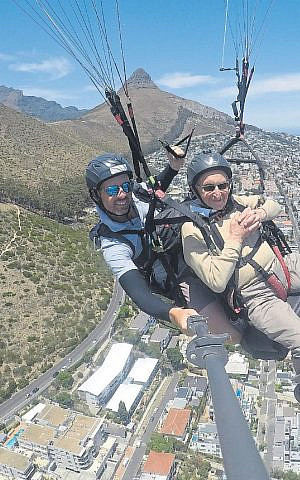 Ex-Capetonian Dr. Hymie Ehrlich may not have flown in space, but he too discovered the joys of free flight late in life. Six years ago his granddaughter invited Hymie on a fun, paragliding date. She obviously knew him well enough to know he might actually say “yes” and “yes” is what he said. The thing is that at the time Hymie was the not-so-ripe-old age of 85. He was so into jumping off cliffs with nothing but a sail above his head that he has repeated this stunt twice since, including one to celebrate his 90th!

It is this same spirit of living life to the full without taking his given date of birth too seriously that recently brought Hymie on a plane to start a brand new life in Israel. Arriving with another 80-odd Zionists, he was the elder among the biggest plane-load of Olim from South Africa in decades. Not that Israel is unfamiliar territory for him for he has many family connections in Israel. The fundamental difference between this trip and the past forty-odd is that this time he had a one-way ticket.

Hymie, whose humility comes shining through, “remembers” that he was born in District 6. His mother spent ten days at the hospital, with the bill amounting to £1 11s 6d. He grew up in the iconic satellite town of Muizenberg on the Indian Ocean side of the Cape Peninsula, famous for its beaches. Through the summers of 20th Century thousands of Jews, both local “Kaapies” and vacationers from around the country would congregate on the white sands and 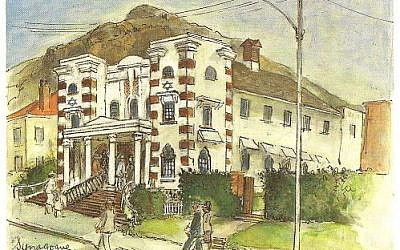 The Muizenberg Shul
by Abe Berry

frolic in the benign waves and amusement facilities. There Hymie’s mother, Rochel, ran the Esplanade Hotel, a kosher establishment that served visitors as well as permanent residents. Hymie’s memory is quite remarkable. When I spoke to him, he asked me if I knew of a Chai Sarah Saevitzon (my pre-Aliya family name.) It turns out that my great-grandmother who I never knew and knew very little about, resided at the hotel in her later life. She died in 1943! 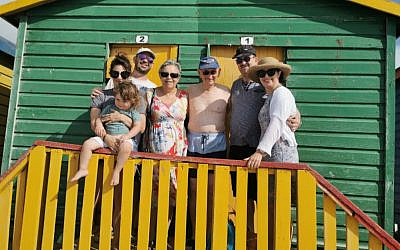 Hymie had a different career path in mind and studied medicine. One of his motivations was a memory of his grandfather dying and his father saying that he wished he was a doctor so that he could have saved him. He was in it for the long haul and practiced until he was 90! For 54 years he ran a practice in partnership in Goodwood, another outlying area of Cape Town where 13 of the 14 doctors were Jewish. Most patients did not have cars so doctors did many house visits and night calls. He remembers one particularly busy Rosh Hashana night. His mother was visiting for the festival and Hymie found her awake and weeping when he returned at 4 a.m. from his 3rd call. “I did not know that you had to work so hard,” she said. Coming from such a hard working woman that had real significance. Hymie is very proud of 3 generations in this noble profession, including his late brother, his son, grandson and nephew.

Perhaps it is that work ethic that keeps Hymie so vigorous. One of his customs he has left behind is his daily 6:30 a.m. four kilometre walk along the Sea Point Beachfront, an iconic strip along the Atlantic Ocean. When I asked if he was afraid of the crime that nowadays pervades the area, he expressed no fear.

Sadly his wife Chana passed away 6 years ago shortly after they returned from a trip to Israel to celebrate their 60th wedding anniversary. Viewing a video of the dinner celebration I was deeply touched by the mutual love that pervaded as Hymie circled around giving each and every one of his offspring an affectionate hug. He has a big heart indeed! 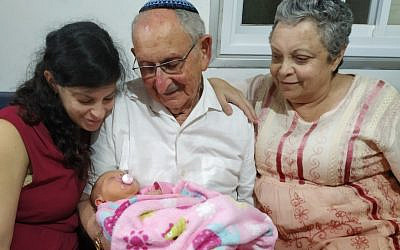 One disappointment is that he will not be able to bring with him all his mementos of a long and rich past. But that is more than compensated for by the fact that he will be joining his offspring who live meaningful lives in Israel, fulfilling the Zionist dream. He will be residing with his son Adrian and daughter-in-law Beverly in Modi’in and will enjoy visits to his daughter Michele and son-in-law Philip Stodel who live in Kfar Adumim near Jerusalem. Five of his six grandchildren and seven of eight great-grandchildren (with two on the way) live in Israel and he relishes spending time with them and other extended family members who have made Aliya over the decades. While the views in Modi’in are less impressive than Cape Town, he plans on continuing his walking routine particularly in the neighboring town of Maccabim.

With his power of positivity, good Hebrew skills and strong family support, it is all systems go for a wonderful new life in Israel.  In Hymie Ehrlich’s case the sky is not the limit. For him it would seem that it really is never too late.

Images courtesy of the family. Paragliding image by Stephan Kruger