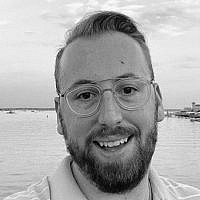 The Blogs
Michael Goldsmith
Apply for a Blog
Please note that the posts on The Blogs are contributed by third parties. The opinions, facts and any media content in them are presented solely by the authors, and neither The Times of Israel nor its partners assume any responsibility for them. Please contact us in case of abuse. In case of abuse,
Report this post.

A diplomat, a lawyer, and an entrepreneur by the age of 35, Alexander Djerassi was born and raised in the Santa Cruz Mountains of California. He grew up surrounded by nature but with a family history deeply affected by war and tragedy overseas. Both grandfathers were Jews forced to flee Central Europe in the face of the Nazi onslaught in the 1930s. His grandmother, whose Huguenot ancestors faced religious persecution in France, became a respected scholar of the Holocaust and of Jewish-Christian relations.

When Djerassi graduated from Princeton University’s School of Public and International Affairs, where his senior thesis on the Arab-Israeli conflict won the prize for best thesis on U.S. foreign policy, he did not flock with his classmates to jobs on Wall Street, in the tech sector, or with elite management consultancies. He instead worked alongside his grandmother to help launch a Holocaust survivor testimony database project. Together they assembled research on the meta-data and whereabouts of unpublished survivor testimonies in the UK, ensuring access for future scholars.

Research trips introduced Alexander to Holocaust survivors around the country. He would spend days with survivors and their families, reading and cataloguing testimonies held in their private collections or in the libraries of local Jewish community groups. The effort attracted the support of prominent survivors and historians, including Elie Wiesel, Freddy Knoller, and Sir Martin Gilbert. Its work-product and lessons learned were passed off to leading Holocaust remembrance institutions.

In 2007, Alexander’s passion for public service and U.S. foreign policy — fueled by his close interactions with Holocaust survivors and his own family’s history — led him to seek work on Hillary Clinton’s presidential campaign. Starting as a volunteer intern on then-Senator Clinton’s campaign policy staff, Alexander was soon promoted to a full-time position writing policy papers and helping to prepare for debates. The 2007-2008 Democratic primary was famously grueling, with the candidates and their campaign staffs facing extraordinary scrutiny from media and opposing political groups. On a campaign full of ambitious and devoted workaholics, Alexander distinguished himself for the combination of his good humor, smarts, and “you-say-jump-I-say-how-high” appetite for work.

Having made an impression on the campaign’s senior staff and on the candidate herself, Djerassi was selected for a role at the State Department after Clinton became the nation’s 67th Secretary of State. In light of his academic background in the Arab-Israeli conflict, his thesis was overseen by two former U.S. ambassadors, he was sent to interview with the career leadership at the Bureau of Near Eastern Affairs (NEA).

In the spring of 2009, he started as the Special Assistant to the NEA Assistant Secretary of State, Ambassador Jeffrey Feltman, himself a 25-year veteran of the U.S. Foreign Service. Djerassi soon proved adept at synthesizing the region’s fast-moving developments with the administration’s larger policy goals, as well as navigating the State Department’s byzantine ways to a degree rare for new political appointees. Over time, Djerassi was assigned increasing responsibilities in Feltman’s office, including speechwriting, preparation of congressional testimony, representing the Bureau in departmental and interagency policy processes, and supporting the Assistant Secretary on official travel to the Middle East, North Africa, and European capitals. In 2010, Djerassi received a State Department Meritorious Honor Award and in 2011 was elevated to chief of staff.

The first term of the Obama administration included no shortage of challenges in the Middle East and North Africa: the transition from a military-led to a civilian-led presence in Iraq, an intensive effort to negotiate a final status peace agreement between Israelis and Palestinians, mounting international sanctions pressure on Iran’s rogue nuclear program, and the political upheavals in the Arab world starting with Tunisia in late 2010. From his position as special assistant and then chief of staff to the NEA Assistant Secretary and as a former Clinton campaign policy staffer, Djerassi participated in the policy processes in Washington responding to those crises and also accompanied his boss to Israel and across the Arab world for consultations in U.S. embassies and meetings with foreign interlocutors to advance American policy.

One such trip brought Feltman, with Djerassi in support, to Tunisia in January 2011, just days after the departure of former-Tunisian autocrat Zine El Abidine Ben Ali in the face of a peaceful popular uprising. The trip would lead Alexander to return to Tunisia, years later, to co-author a Carnegie Endowment for International Peace report calling for redoubled international support to Tunisia as it continued to grapple with profound economic, security, and social justice challenges.

When Donald Trump secured the U.S. presidency in 2016, Djerassi returned home to California determined to refocus his energies from Middle East crises and global challenges to his own country’s extreme and palpable divisions. He went on to help found the San Francisco-based civic-technology company, Mos.com, with the lofty mission of “breaking down financial barriers to opportunity.” Djerassi served as the company’s founding Chief Policy Officer as Mos became a leading tool for college students seeking grants and scholarships to support their education and avoid taking out costly student loans. Mos combined a high-tech approach with hands-on expert counseling to help students, especially “first-gen” students whose parents did not have a college degree, succeed in the complicated financial aid application process and avoid getting trapped in costly student debt.

What stands out most about Alexander Djerassi is not his academic pedigree — a B.A. magna cum laude from Princeton’s School of Public and International Affairs and a law degree from Yale Law School; nor his distinguished government service in the State Department’s Near East Bureau during a time of remarkable challenge and tumult in the Middle East; nor his company’s progress closing the opportunity gap at U.S. colleges. It’s that the inspiration he felt as a young man to make the world a better place, working to ensure the world learns from the lessons of the Holocaust and the experiences of its survivors, is a fire undiminished by time. No doubt it will continue to serve him well.

About the Author
Michael Goldsmith is a 43 year old journalist from Boston, Massachusetts. He grew up writing blog posts and journaling in my spare time. He has always looked up to men and women who made it in this country and who also share the same faith as him. They paved the way for people like him to never set limits and to never doubt his self, to believe that he could be successful one day as well.
Related Topics
Related Posts
Comments