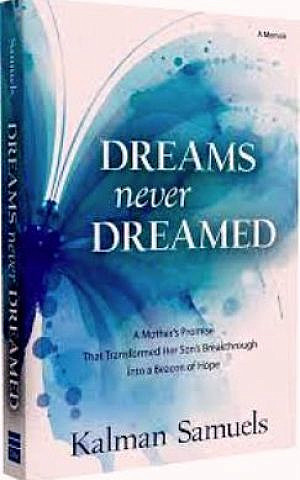 This is a true story that both tears at the heartstrings and fills one with wonder at what human beings are capable of achieving. The first part of Kalman Samuels’s memoir takes us on his personal journey from secular to orthodox Judaism, then the early days of his marriage to Malki and, after a while, their first baby – a girl they named Nechama Leah.  The real burden of his story begins in October 1977 when Malki takes their second baby – one-year-old Shalom Yoseph, known as Yossi – to the well-baby clinic to receive the routine triple immunization, DPT, against diphtheria, pertussis and tetanus.

What followed is the stuff of nightmares.  It quickly became apparent that something terrible had happened to their child. Specialists in Israel and America confirmed that baby Yossi had been rendered blind and deaf. Eventually Samuels proved to judicial satisfaction that by the time his son was injected with the vaccine, Israel’s health authorities had known for almost five months that the batch they were using was dangerously flawed.

The family’s journey to the courtroom, involving medical tests and the gathering of written testimony from a succession of specialists, took six long years, and it was only in September 1983 that the Samuels family was in a position to file their suit. The case itself, contested by the authorities every inch of the way, dragged on for another seven years, and it was not until 1990 that a court-brokered settlement was agreed by both sides.

But what had happened to Yossi over that period was little short of a miracle. When the time came for him to start formal education, he was assigned to a special school and provided with his own teacher and a personalized program.  Through the school, the Samuels came to know a special education teacher called Shoshana Weinstock, herself rendered deaf at the age of five following meningitis.  Yossi was eight years old, unable to speak and with no knowledge of sign language, when she agreed to give him private tuition.  This she combined with teaching the family sign language, so that they could communicate with him.

One day, when Shoshana brought Yossi home, she was in a state of wild excitement.

“He got it!” she cried. ”His life has changed forever.”

Kalman and Malki had no idea what she meant.

“He understands that I’m signing letters in his palm.  His entire world has just opened.”

Shoshana had been finger spelling on his hand the five symbols that spell the word “shulchan” (table) in Hebrew – something she had been trying for some time, but with no response from Yossi. Suddenly a smile had lit up his face, and he began touching the table top with his other hand.  The penny had dropped.  Shoshana had opened his door to language.

From that moment Yossi advanced with astonishing speed.  He learned braille – letters consisting of raised dots which the blind read with their fingertips.  Soon he was not only reading braille, but writing it on the special six-key braille machine.  Then a gifted speech therapist at his school undertook the apparently impossible task of teaching Yossi to speak Hebrew.  To a child who could neither see nor hear she had to convey what sound is, and how to vocalise letters and words.

The almost incredible outcome was Yossi’s bar-mitzvah, when he was called up to the Torah and, Samuels tells us, “boomed out the blessings, deliberately and precisely, each word loud and clear.”

The story of Yossi’s victory over the disabilities inflicted on him is uplifting in itself, but Dreams Never Dreamed has even more to reveal – its inspirational result.  Way back, in the time the Samuels were first trying to understand what had happened to their son, Malki had made a pledge to the Almighty: “If You ever decide to help my Yossi, I will dedicate my life to helping so many other mothers of children with disabilities whom I know are crying with me for their children.”

By way of utter determination on Malki’s part to hold fast to her intention, and through a series of events, some almost miraculous, in 1990 an afternoon program for eight disabled children was established in a local apartment.  Malki called the program Shalva, which translates as “serenity” or “peace of mind”.

It proved to be only a beginning.  The enterprise developed, funding was forthcoming, planning permission was granted, construction was undertaken, and what emerged in Jerusalem was a splendid, purpose-built structure, now one of the world’s largest centers for disability care and inclusion which hosts some 100,000 visitors each year.

Dreams Never Dreamed is an inspiring and heartwarming story – an object lesson in how much can be achieved by determination and faith.