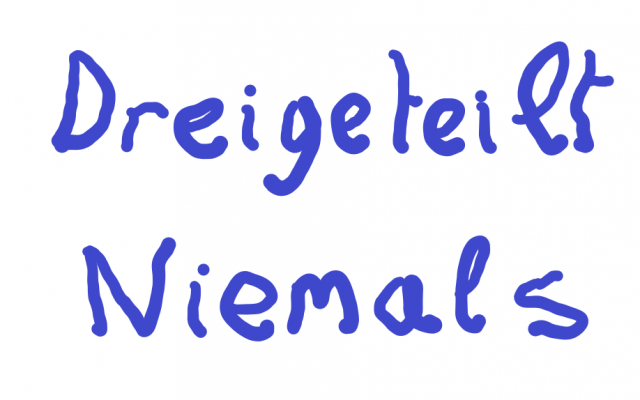 Germany started not one but two World Wars. Fortunately, they lost both. At the end of their second attempt at world domination, the victorious Allies divided Germany between them.

But the Germans were sore losers. For many years, until reunification in 1990, the unrepentant Germans complained about this enforced division of their country with the slogan Dreigeteilt? Niemals! (Divided three ways? Never!)

Germany has spent much effort in distancing itself from the past, even rewriting history. We are led to believe that the Allies in WWII were fighting the “Nazis”; terrible people who caused much suffering, even for the poor Germans. The fact that Adolf Hitler was elected president of Germany by a majority of its citizens is not to be mentioned.

Yet these same Germans have the temerity, the chutzpah, to condemn Israel when we try to reunite our historic homeland. Germany, we are told, warns Israel that annexation may hurt ties. (Times of Israel 7 July 2020)

Germany is a new country. It was only two thousand years ago that it became known as a distinct region in central Europe. The Roman commander at the time, Julius Caesar, called the unconquered area to the east of the Rhine, Germania, to distinguish it from Gaul (France) which he had already conquered.

In contrast, the Kingdom of Israel and Judah, under the reigns of Kings Saul, David and Solomon, was going strong some thousand years earlier.

When Solomon’s son, Rehoboam, succeeded to the kingdom’s throne around 930 BCE, the country split into two kingdoms: the Kingdom of Israel (including the cities of Shechem and Samaria) in the north and the Kingdom of Judah (including Jerusalem) in the south. Even then, two Jews, three opinions was the order of the day.

Today, we are working to reunify our country. We have many documents to prove our claim. An early document is, of course, the Torah, or the Bible as it is commonly known.

In Genesis 12:1 it is said:
The LORD had said to Abram, “Leave your country, your people and your father’s household and go to the land I will show you.”
and in Genesis 12:7:
The LORD appeared to Abram and said, “To your offspring I will give this land.”

And, on November 29, 1947 the United Nations adopted Resolution 181 that would divide Great Britain’s former mandate into a Jewish state and an Arab state when the British occupiers were to leave. The Jews accepted the resolution, the Arabs did not and started a war which, like Germany, they lost.

As we try to reunify our country, those that wish us ill falsely call it “annexation”. It is, of course, impossible to annex one’s own country. We answer our detractors by following Germany’s example and calling out – Dreigeteilt? Niemals!