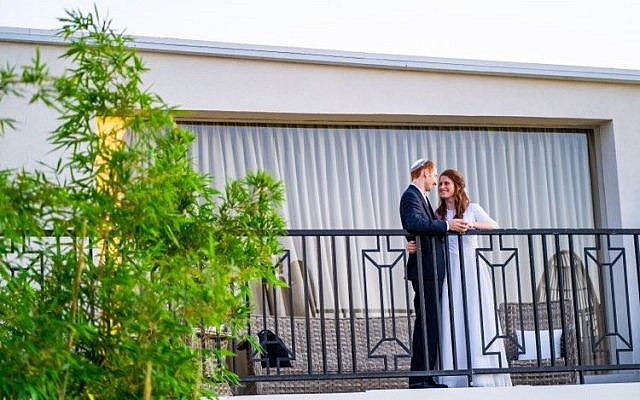 Parshat Miketz begins with Pharoah waking up agitated after having two dreams which he doesn’t understand and which his necromancers are also unable to interpret. Pharaoh’s chief butler recommends Yosef to interpret Pharaoh’s dreams as Yosef had correctly interpreted his own dream as well as the bakers dream two years before, when they were in prison.

In Breisheet 41:14 we see that Pharaoh takes the chief butler’s advice:

Pharaoh sent and summoned Yosef, and they rushed him from the dungeon but (Yosef first) shaved and changed his clothing and then he came to Pharaoh.

Rashi points out that Yosef shaved out of respect for royalty.

Sforno explains that Yosef changed his clothing as it is forbidden to appear in the King’s gate clad in sackcloth, prisoner’s garb.

This reminds us of Megillat Ester 4:1-4:

After Mordechai learned that Haman made a deal with Achashverosh that all of the Jews should be destroyed, Mordechai tore his clothing and put on sackcloth with ashes. He went out into the midst of the city and cried loudly and bitterly. He went only as far as the front of the King’s gate for it was forbidden to enter the King’s gate clothed with sackcloth…And Ester’s maids and chamberlains told her about it, and the Queen was greatly distressed; she sent garments to clothe Mordechai so that he might take off his sackcloth, but he would not accept them.

In the Midrash, Ester Rabba 7:7, Rabbi Yochanan taught in the name of Rabbi Binyamin the son of Rabbi Levi: The children/descendants of Rachel (Yosef and Mordechai) were both tested equally (by Potiphar’s wife and by Haman) and they were both equally great when they rose to power as it says with regard to Yosef (Breisheet 41:42) “Pharaoh then took off his ring from his hand and he placed it on Yosef’s hand. He dressed him in linen garments and put a gold chain around his neck” while with Mordechai it says (Ester 8:2) “The King slipped off his signet ring, which he had removed from Haman and gave it to Mordechai.” They were then escorted around on a horse.

We can follow Yosef’s and Mordechai’s paths to secular power by seeing the change in the clothing that they wore.

In Judaism as well we see that the clothing of the Kohanim has a special significance:

Make sacral vestments for your brother Aharon, for honor and splendor (Shmot 28:2).

Ramban explains that he (the Kohen) should be honoured and glorious with honourable and glorious clothing. As the verse states in Yishayahu 61:10 “as a bridegroom who exalts himself in splendour…” as these clothes (the clothing of the Kohanim) were the clothes of royalty. Their likeness was worn by kings during the time of the Torah.

Even now with Corona, when large weddings are forbidden, when brides and grooms continue to get married in Jerusalem, even if the wedding is in their backyard with only 20 people in attendance as per the rules in Israel right now, the bride and groom look regal dressed in their finest clothing. They personify what is described by Yishayahu 61:10:

I (Zion) will rejoice intensely with God, my soul will exult with my God, for He has dressed me in the raiment of salvation, in a robe of righteousness He has cloaked me, like a bridegroom who exalts himself with splendour, like a bride who bedecks herself with jewelry.

May we speedily see the days when we can once again dress in our finest clothing and celebrate with the regal brides and grooms of Jerusalem.